Over a week back home and there has been little sun. After 8 years living in sunnier climes I am not enjoying this dreary weather.
My father (93) and I gaze out of the window at sodden sparrows and waterlogged blackbirds who sit hunched and immobilised as if pinned to the bare winter branches.

We alternate optimistic and gloomy homilies .. “Rain before 7, fine before 11”. It always works” He saysCome 11 it is still raining“From January up to May, The rain it raineth every day”Oh God …..that’s depressing“It’s brightening up! I can see the sun is coming through!”No, not really.

It’s just “grey” now as opposed to “profoundly grey” and the lounge light is reflected in the window because the sky is so dark outside.“

If February brings no rain, ’tis neither good for grass nor grain” Hmm…making the best of a bad job. How very stoic.“But its only to be expected at this time of year. You know, ‘February fill dyke!’ ”

Yes, indeed, in this county of dykes, ditches and drains I suppose it is only fitting that they are filled and ready for the growing season.
Living abroad, I had missed the seasons and in the steamy suffocating heat of a Florida summer I had once pined for “drizzle”. Short of other conversation Dad and I pondered the origin of “February Fill Dyke” and found this very wet picture by Benjamin Leader. 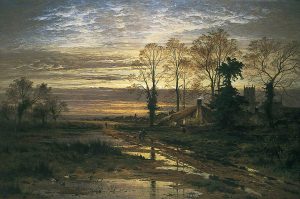 “A famous Victorian landscape, February Fill Dyke was greeted with lukewarm reviews when it was first exhibited at the Royal Academy in 1881. With later showings in Manchester for the Royal Jubilee Exhibition, it became very popular. The scene is actually a November evening after rain. The title is taken from an old country rhyme;”February fill the dyke, Be it black or be it white; But if it be white, It’s the better to like.”…Manchester City Art Gallery

The saying, according to the Oxford English Dictionary has its origins in the 1600’s:

February fill dike Be it black or be it white; But if it be white, It’s the better to like.

Confined to the house I had been going through the few old bits and pieces I had stored here and found this little pen and ink illustration I made from eons ago.
A water filled hoof print from a time when a pretty little grey mare and I used to brave any kind of weather. I can well remember squelching along the dyke tops and down the farm tracks in those bleak and icy February days. It seemed fitting. 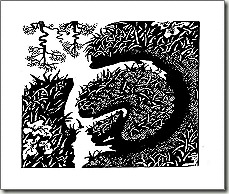 And as an odd little coincidence we happen to be in Manchester for two days.
We went to the excellent City Art Gallery… and there, amongst other, dare I say rather dull, English landscapes was “February Fill Dyke”.

The Gallery has some wonderful exhibitions particularly in the craft galleries, with some fabulous Grayson Perry work. It made me really want to get back to ceramics.. ah…so much to do and so little time. And now that March is here maybe more sun!