It was Shrove Tuesday this week and I was thinking about pancakes, lovely pancakes with shimmering golden syrup and tart lemon juice.

In the local supermarket here there is a small section, just a shelf or two, marked “Ethnic Foods”.
Here are the Brit “favourites”, Marmite of course, some soon-not-to-be-Cadbury’s chocolate bars, cheese sauce mix in a packet (why ????) Birds Custard Powder, some curry sauces I have never heard of and of course glorious Tate and Lyle Golden Syrup.

I find myself rather liking to be considered an “Ethnic” here in the bland uniformity of suburban Orlando. It gives me a frisson of being slightly exotic as I reach up to take my ethnic food from the ethnic shelf. I

brought my lovely tin of Golden Syrup home and pondered the label.. and its motto. “From the strong came forth sweetness”. How well this has been imprinted on my mind over the years. I could almost draw that roundel from memory, with its (as I used to think when I was little) “sleeping” lion.

There was always a tin in the pantry alongside the equally gorgeous Black Treacle, tins that I remember were always sticky.  This old classic label seems to have been spared updating and I read on  Lyle’s site that “This distinctive packaging has hardly changed since 1885” 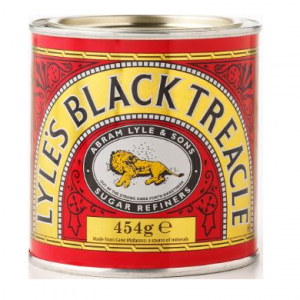 From the Lyles site: https://www.lylesgoldensyrup.com/our-story

t is, as usual, a bloodthirsty affair. Samson had a hankering for a Philistine girl and against his parents wishes sets off to find one. On the way he kills an angry lion. On the way back from finding his love he sees the lion’s body and notices that bees have made a nest there. He eats some of the honey and takes some home to his parents.
At the wedding feast Samson poses a riddle. “Out of the eater came forth meat, and out of the strong came forth sweetness.” If the Philistine guests, all 30 of them, can solve the riddle in a week he will give them 30 new sets of clothes .. if they can’t he will ask for 30 sets of new clothes for himself. It’s an impossible riddle and the Philistines can’t possibly know the answer so they persuade the wife to turn on the tears for a whole week and wheedle the answer out of him.
Then it’s all a bit grim, because Sampson has lost the bet and has to pay. He goes to a Philistine city and murders 30 people and takes their clothes to give to the guests. This is not a good move, as when he later decides to try again with the wife ( I can’t possibly think why), her father tells him,

‘I gave her to one of the wedding guests’, he said. ‘But don’t worry. She has a younger sister who is prettier. You can have her.’

( from a “simplified” version of the Bible story about Samson entitled “She Done Him Wrong” here) or, more eloquently, read, King James Old Testament, Book of Judges 14:14. Poor Lion, Poor Samson, Poor Bees, Poor Foxes!!…. whose tails he sets fire to to ruin the Philistine’s crops.. and it’s all murder and mayhem from then on.

So why this odd link to the syrup… Abram Lyle was a firmly religious man, but it is not exactly clear what point he wished to make by adopting this motto..  from the Lyle website again :

“Was he referring to the tin holding the syrup – or the company producing it?” 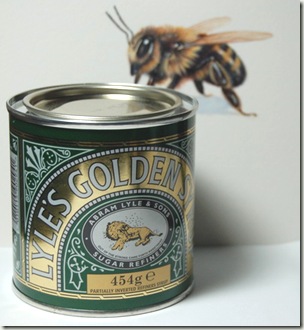 Mr Lyle’s syrup and one of my bees…