I was intrigued by its little potatoes and thought it was rather elegant, with its beautiful heart shape leaves, but I do, now, have to admit that the Air Potato is a problem… this was my drawing. 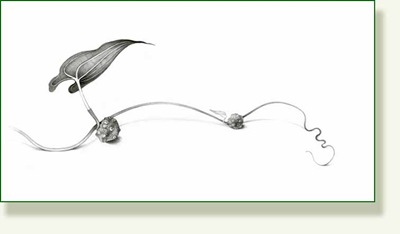 It grows everywhere, dropping its little potatoes which root enthusiastically.
New and vigorous plants spring up immediately and twist creep and crawl over everything. It’s a shame because in isolation it is pretty and as a member of the Yam family was initially brought to Florida as a possible food crop.

However before you rush and and gather them up for a cheap meal it seems that the “uncultivated” ones here are poisonous. So, ‘cultivation’ must breed out the poison. (I am tempted to draw a hopeful analogy to the human race), Good Air Potato identification and info here.

What prompted this post was that on Saturday, the 8th Annual Air Potato Raid was held, in Orlando. This year their goal was to involve over 500 volunteers and collect 10,000 lbs of dreaded potatoes to try and bring the whole spreading menace under control. It must seem like a hopeless task!

However there may be hope, winging over the horizon, direct from Katmandu, in the shape of this pretty little beetle.

I know about this beetle because the kind researcher who supplied me with the gorgeous Euglossa bees which I drew before Christmas, also sent me 3 beautiful little specimens of Lili. 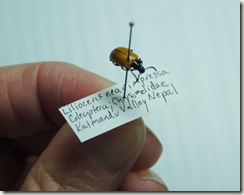 This little beetle had been the subject of his research into the biological control of invasive weeds that threaten natural areas here in Florida, and it seems that this particular species of Lilioceris feeds only on air potatoes.

There are other Lilis who are partial to peoples lily bulbs, but they are the different, Lilioceris Lilii, very similar looking but with a red thorax. This is from Florida Invasives.org Newsletter published by the Florida Fish and Wildlife Conservation Commission, which also has some other very interesting info about invasive species.

“Air potato
In 2008, the host range testing of Lilioceris sp., a leaf beetle discovered in Nepal as a candidate biocontrol agent for air potato (Dioscorea bulbifera), was completed. This research, which began in 2005 by the USDA-ARS, demonstrated the beetle’s host range is exceptionally narrow. It can develop only on air potato.
This research also showed that a single beetle can consume, on average, almost three square meters of leaves during its life (almost one square meter during its larval development).
Taxonomists have been unable to give the beetle a name other than Lilioceris near
impressa, but research is underway to identify or describe the species. This beetle has just been petitioned to the USDA-APHIS (TAG) for review, the first step in obtaining permission from the USDA-APHIS for its release in Florida . “

So perhaps it will be good news for the native plants that are being strangled by the air potato. I know there is always much justifiable concern these days about introducing any alien species but I am sure that rigorous testing has been done, and maybe here it is a case of “set a thief to catch a thief. “

I don’t think I have ever drawn a beetle before, so needed some sketches and my best magnifying glass. Lili’s feet are incredible.
The legs end in two rounded slightly hairy pads, from the centre of which springs a long curved toe which has two tiny claws on the end.
The carapace is russet orange with a pitted surface, not really spots as such, thorax and head all black. 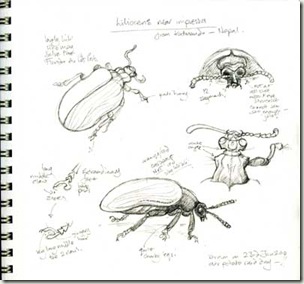 Thinking about the pose and leg position…. 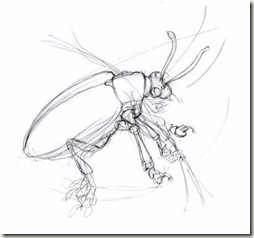 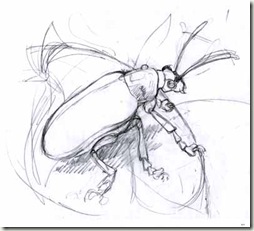 So, this is an imaginative drawing of “Lili”, Lilioceris near impressa, on a very small Air Potato Leaf, Dioscorea bulbifera, contemplating her extensive playground and the prospect of an endless feast of Florida Air Potatoes. 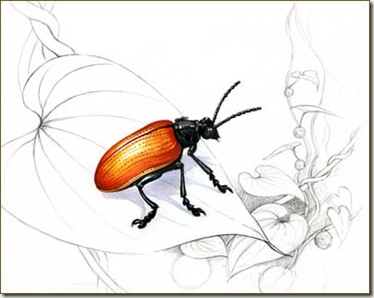 The petition to release the beetle has been approved by the Technical Advisory Group for Biological Control of Weeds with the condition that it be identified or described as a new species.

The study to do this is ongoing by scientists at the Smithsonian. After the study is done, an Environmental Assessment has to be written, then publication of the proposed release, followed by a public comment period. Perhaps the release will be 2011. ….hope for the beleaguered hammocks of Florida soon.