We had many visitors to the Buzz Tent. My paintings returned with a few, now displaced, earwigs who had made a temporary home at the back of the pictures.

Bees came and went, a black cat poked its head in one day and then there was this; walking up the rope which was protecting new turf nearby was a handsome beetle. I know nothing about beetles but did know there had been a sighting of a small colony of unusual ones at Heligan.

John Walters naturalist and wonderful natural history artist had called in a few days before. He is surveying the insects at Heligan and had told me about them.

Read more about it here. Walking the rope… 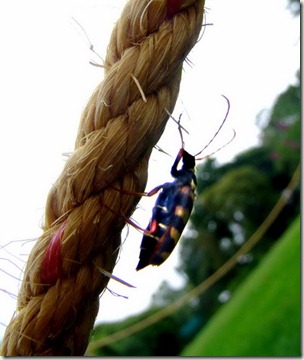 Sitting on my thumb quite happily and …. 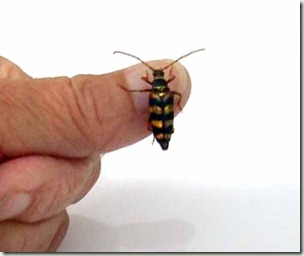 on Chris’ black t-shirt, showing off its lovely colouring. 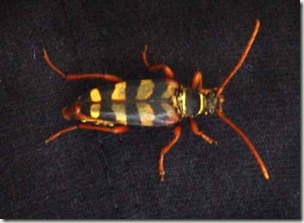 t flew away after a few minutes  … Lovely thing…a bit bee-like I thought.. 🙂

You can see another photo on the Heligan Wild Website photos for June.

A quick look at the biodiversity map locates them in Cornwall and a few other southern sites.. and then, curiously, one in Sheffield!( I’m not sure how up to date it is).

I am wondering if a little Golden Haired beetle hitched a ride with me to Grafham?