Today a couple of stems of the rather nondescript ephedra Ephedra major, the Joint Fir, growing quietly and innocently in the Arid Garden at Leu. A medicinal plant extraordinaire which I had overlooked until I was prompted by Eric to consider its very ancient history. Who ever would have thought that was the original source of the very potent drug ephedrine, the airways expanding ingredient of old asthma inhalers that made your heart beat so very fast you thought your eyes would pop out of your head but mercifully stopped the gasping and let air rush down into your desperate lungs.. no wonder it is controlled now. My brief research seemed to indicate it is prohibited by law to sell ephedra here in the form of dietary supplements. Go to the FDA the US Food and Drugs Administration here to read more about its ban and hazards. 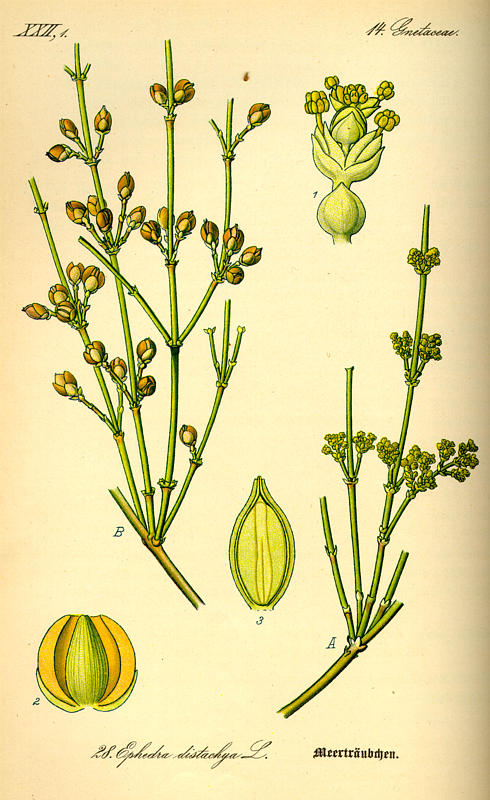 These curious plants are very ancient and odd. Dating back to the Triassic period (200 MYA) they were companions to the cycads, ginkgos and early conifers. They are one of the three members of the Gnetale order. The other two genera, Gnetum and Welwitschia, are even stranger and I hope to come across them one day.

Ephedras are drought-resistant shrubs growing to about 4 ft height with slim jointed stems and reduced scale-like leaves which grow in opposite pairs at each joint. Male and female “flowers” bloom in spring on separate plants in cone like structures which are followed by small brown to black seeds. 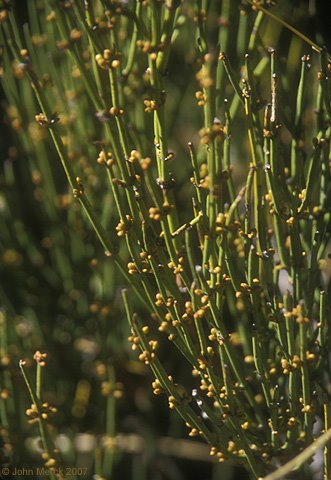 Known as a significant medicinal plant by the Chinese for centuries, the Asian species of ephedra have much stronger concentrations of ephedrine than their New World relations. It was discovered that as long ago as 48,000BC Neanderthals had prepared a burial site inside a cave in Iraq where the bodies were found to be surrounded by eight medicinal plants, amongst them Ephedra viridis.

Here the native Indians made teas from ephedra for all manner of disorders, including stomach and bowel problems, colds, fevers and headaches and made poultices for burns and ointments.
With the arrival of the European settlers it became known as Mormon Tea, Brigham Tea, Cowboy Tea, Whorehouse Tea, or Squaw Tea.

“Early Mormon settlers, who abstained from regular tea and coffee, drank the beverage made from this plant. A handful of green or dry stems and leaves were placed in boiling water for each cup of tea desired. It was removed from the fire and allowed to steep for twenty minutes or more. To bring out the full flavor, a spoon of sugar or some strawberry jam was added depending on individual taste.
Other white settlers used a very strong tea of the plant for the treatment of syphilis and other venereal disease, and as a tonic. It was standard fare in the waiting rooms of whorehouses in early Nevada and California. It was said to have been introduced by a Jack Mormon who frequented Katie’s Place in Elko, Nevada during the mining rush of the last century.
from Wes Larson’s Mormon Tea web page here

In its strongest form, the dangerous má huáng tea made from Ephedra sinica is very potent. Used by the Chinese for more than 5000 years for asthma, upper respiratory infections, fever and congestion, one of its characteristics is the speeding up of the metabolism as well as heart rate, which has made it alluring to slimmers. However, a helpful site ( still trying to sell you the pills ) does state that “serious dangers such as death” are recorded side effects.. Hmm what else do you need to know.. perhaps just eat less.. ? 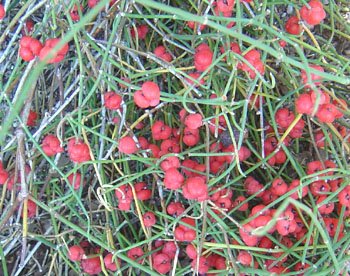 Also at Leu is an ephedra distacyia or sea grape, which Trade Winds Fruits here say has edible berries I will let you know. 🙂 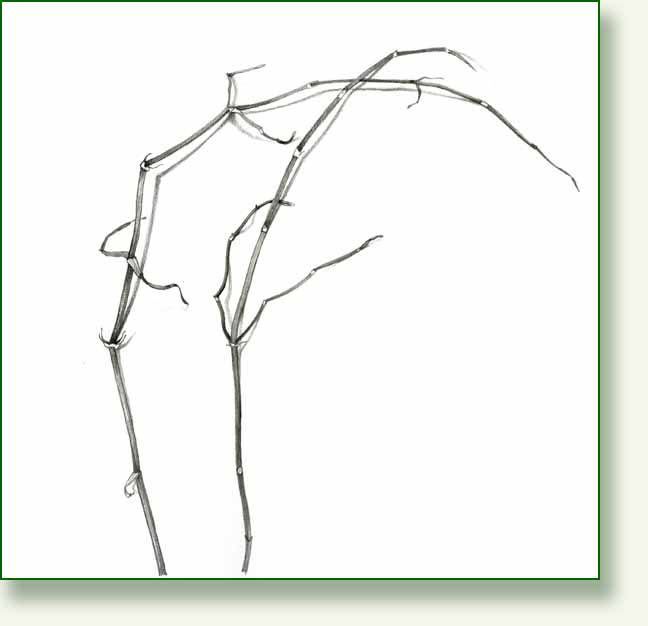