The 24th Of June is the old Midsummer’s day and also the celebration day of St John the Baptist. The decision to link this particular day with St John was, I think, the Christian way of trying to woo the almost god-fearing away from their deeply rooted pagan celebrations. 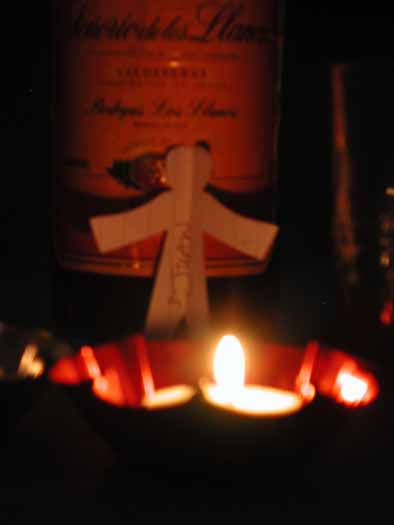 Our own mini St Juan in Spain.

In Spain, St Juan is celebrated with bonfires and burning an effigy. If there is a beach nearby people will link hands and rush into the sea at midnight. It’s a wonderful sight which we saw a couple of times in Andalucía. If no sea is at hand then a pond will serve just as well and we celebrated at a local restaurant near the village one year where the burning effigy was plunged into the water of the pond at midnight to the accompaniment of fireworks and much cheering. The water from the pond was a handed round in small dishes for us to splash over our faces thereby guaranteeing enduring beauty. Well I can’t make any comment on its effectiveness! 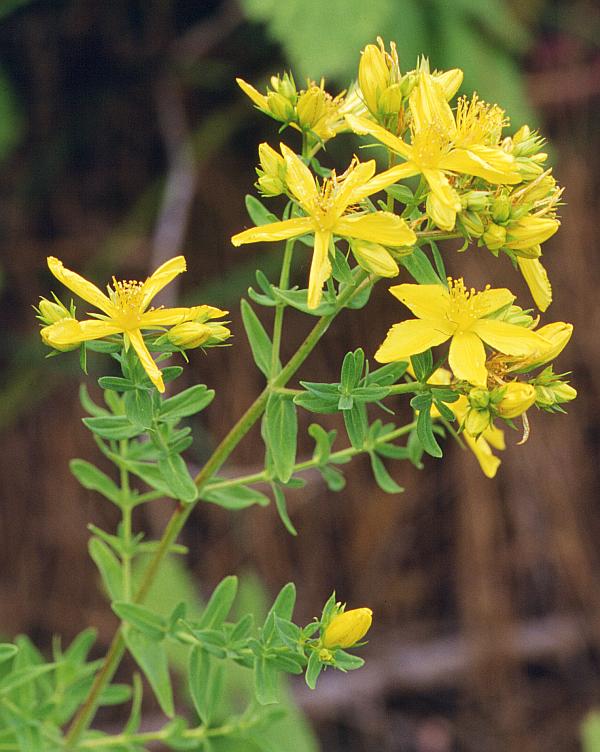 On the Feast of St. John, it was customary to gather the perennial herb St. John’s Wort. It is another plant surrounded by many myths and legends and hopeful cures. Its fierce anti evil properties were enhanced by burning it in the midsummer bonfires, symbolising purification of crops and communities and since medieval times the herb has been hung over doors, windows and icons to keep witches and other potentially harmful spirits away. The juice from the stems is blood red, giving rise to an old belief that the leaf spots would ooze blood on August 29th, the day on which John the Baptist was executed, or that the spots would only first appear on that day.

Hypericum perforatum . In ancient Greece St. John’s wort was called hyperikon. It seems to mean ‘over an apparition’, or ‘above an image’ referring to its protective use for icons, doors and windows. The perforatum part of the name comes from the many tiny translucent dots in the leaves, which look like holes if held up to the light. There are also black dots on the leaves and sometimes a reddish tinge to the edges of the leaves.

It is well known to the herbal medicine enthusiasts and it is mainly used, and held in high regard by many herbalists, for the treatment of nervous conditions, sleeplessness and depression. Hippocrates recommended its use for “nervous unrest” so maybe the medieval use of Hypericum to ward off the demons of melancholy was not as fanciful as we might think.

Unfortunately, as many will know who are country dwellers it is also poisonous. Also known as ragwort it is a hazard to livestock. The active ingredient is hypericin, a phototoxin that travels to the skin after ingestion creates inflammation of the skin and can result in secondary infections and can be fatal.
However to combat this now invasive weed enter the pretty shiny beetle the Klamath weed beetle. . 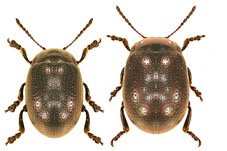 In California they had a problem with St Johns Wort and in 1947 they introduced the beetle with remarkable results. In about 7 years the beetle’s voracious appetite had reduced the plant to only 1% of its original population. This was such cause for celebration that a huge stone monument was erected in Eureka to the beetle’s honour.

The most interesting thing leaf wise are the spots. The translucent ones are colourless layers of essential plant oils and resin.
The black dots are thought to be the source of the chemical and when rubbed between the fingers, they leave a red deposit. My little sketch today is more by way of a diagram. It’s a fascinating plant and these spots are reminiscent of the nectaries on the passionflower leaves but have quite a different function.
_____________________________________________ 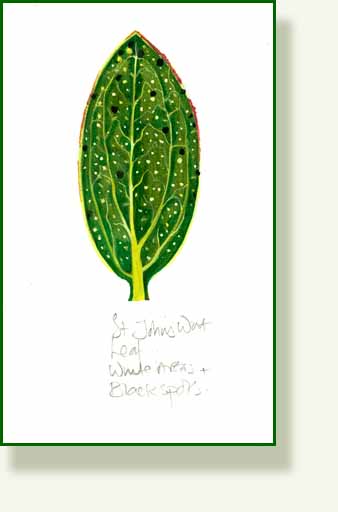