I found a big hornet yesterday, a magnificent Vespa crabro.

It was lying on the car parking area in front of the house and I think it may have collided with a car. It was showing some slight signs of life and so I laid this beautiful creature in an open jar with some leaves, honey and water.. just hoping that it would revive but sadly not.

I saw and heard one the other day flying by the water and have seen a couple more this year up in Lincs. They are hard to miss.

Before I started learning about bees and wasps I gave all buzzing things a wide berth. Now I am beginning to understand more about them and much of the fear has gone… but such a big wasp is something to be reckoned with.

I would not normally be willing to be so close, as  I, like most laymen, assumed that these were ferocious creatures, but it seems not to be the case.  Dieter Kosmeier in his site  http://www.hornissenschutz.de/hornets.htm pleads for more understanding.

“Outside of the nest area hornets never attack groundlessly. Few people realise that hornets are amazingly peaceful animals, even shier than honey bees, which prefer to evade conflict. Scientifically it has been shown that stings of hornets are not more dangerous than bees and wasps. It is their considerable size (queen to 35mm) and loud flight noises that induce unnecessary fears. Those striking out in fear are those that may be stung”

So remember not to strike out in fear when this gentle giant happens by. It is probably on its way somewhere important and has not the least interest in us. This one I think was a female judging by the big square head. It is beautifully marked and worthy of a good painting, but I am short of time so a few sketches will do for now. 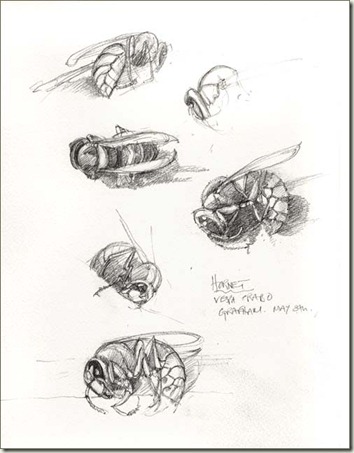 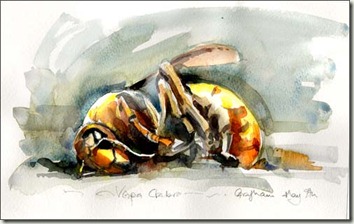