There hasn’t been much time for the luxury of drawing in the last few weeks. However I have done a little more bee research. Early in August on my first visit to the British Museum I found this fabulous huge golden wreath. 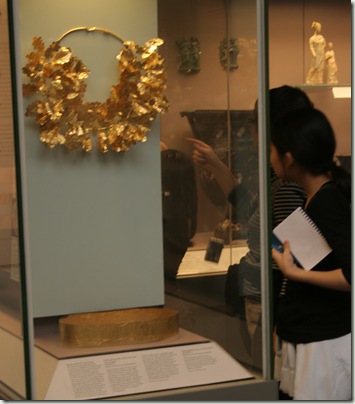 Hellenistic, about 350-300 BC
Two cicadas and a bee nestle among the oak-leaves This naturalistic wreath of oak-leaves and acorns is supported on two golden branches that are now reinforced by a modern copper core. At the back the branches end in obliquely cut end-plates, at the front they are held together by a split pin fastener concealed by a golden bee. Each branch bears six sprays with eight leaves and seven or eight acorns, as well as a cicada.” 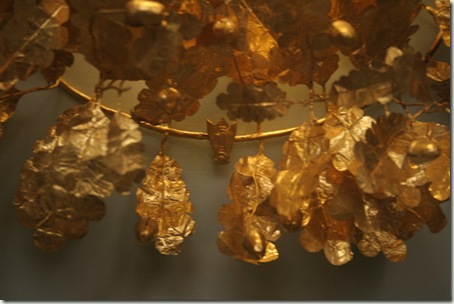 My photos are not too sharp due to the low light but this is the most beautiful thing. There is no explanation of the symbolism but the bee was already well established by this time in both economy and myth, a representative of royalty in Ancient Egypt and a symbol of immortality. There are also some rather odd little gold bee goddess plaques from seventh century Rhodes probably associated with the worship of Artemis. .. This is a strange creature half bee half woman.. a real Queen bee. I was curious about it, so scribbled a sketch while I was there. 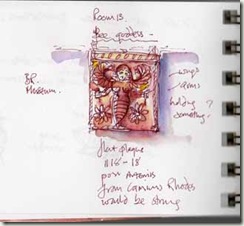 … but go here to Wiki the entry for a very good close up.

Garden and Cosmos The main reason for being at the British Museum was to see the fabulous “ Garden and Cosmos: The Royal Paintings of Jodhpur” exhibition, a feast of exquisite paintings depicting lush gardens, delightful scenes from everyday life, love, the Ramayana and, most beautifully, the abstract concept of the “absolute”. See more here.

My good friend Gill and I spent 3 hours lost in wonder and admiration. It was spiritually uplifting, sometimes funny in its observations of life and so finely executed. A favourite scene of mine depicts a grove of holy men, one of whom is “comforting” two troubled souls.. a merchant and king, who even then I imagine had much to be troubled about, by revealing that the apparent solidity of the world is a mere illusion. 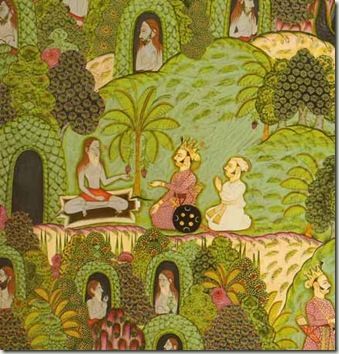 Below, in a detail of a larger painting, elephants frolic in the monsoon rain while death and drama are continuing stage left.

I may well return to all this in another post, it was complex, beautiful and inspirational. I feel some welcome influences may creep into my future work.

Outside in collaboration with Kew Gardens had been planted a small companion Indian Garden.
Here you could find banyan, peepul, lotus, mango , the delightful blue sausage tree and various small shubs and flowers which were being enjoyed by some obliging local bees. A wriggling little English honey bee on Himalayan Cranesbill 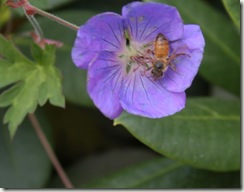 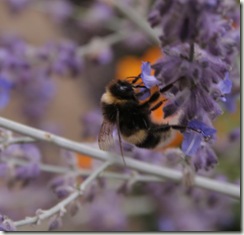 A curious footnote.. this wonderful exhibition was part of the “ Indian Summer” season at the British Museum.

I wonder how many of us presume that the phrase “An Indian Summer” meaning a late pleasant spell of weather, came from British Colonial Indian times.. apparently not so, it originated in America.