I have spent hours experimenting with different combinations of the images and backgrounds. It is a very good exercise for learning about overlays registration etc. I will post more of the stages on Printdaily next week, but for now here are four fossils prints based on the fragments I found here at Grafham.

A is for Ammonite

B is for Belemnite

C is for Crinoid

D is for Devils Toenail

All are reduction Lino prints: Image 6 x 4 inches I am not quite finished with the fossils yet and am playing about with ideas for a small concertina form which will use the single prints in some way.

This was a first rough idea.
I hope to get something more done next week. I do like these little book forms.

I am continuing my explorations of the fossils that can be found here at Grafham. So far I have found Gryphaea, Belemnites, bits of Ammonites but as yet no sections of Crinoid stems. They are a common find but I need to take some more time to look as they are tiny..but unexpectedly very beautiful. Some are simple and circular in sections and some are star shaped. 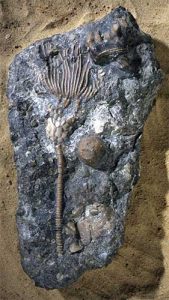 Photograph from the British Geological Survey website.
If you are lucky enough to find a more complete fossil it would be rather like this.

Crinoids
In folklore these beautiful slender columns were thought to have stretched from earth up into the heavens, occurring at times of storms and were known individually as star stones. The simple discs with a handy central hole were thought to be fairy money or “St Cuthbert’s Beads” 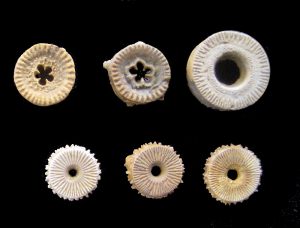 Ammonites
Ammonites are particularly interesting with their beautifully coiled shape. It’s not surprising that they were known as snake stones.
But I am fond of snakes so was dismayed to discover that they were thought to be the remains of snakes, cursed and turned to stone by St Hilda.
And then to add insult to injury they were subject to a beheading curse by St Cuthbert. All this to account for these curious curled and apparently headless things found in abundance near Whitby.
I have written about this snaky connotations over at Printdaily. See Ammonite:The Curious Snake Stone.

Ammonites occurring in architectural stone are quite common but it is thought that this ammonite imprinted stone was specially selected for the entrance to Stony Littleton’s Neolithic Chambered Long Barrow. 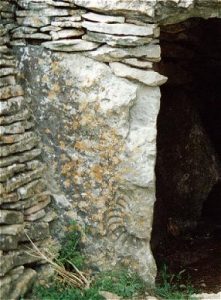 Belemnites I wrote about my splendid Belemnite find in my last post  and as with the Devils Toenails these bullet shaped things had devillish associations, being known as Devil’s fingers or Thunderbolts occurring after thunderstorms. It’s interesting that many of the legends relate to storm activity, I guess heavy rains would have revealed the fossils leading to an understandable connection.

It’s all very inspiring for an artist (especially one with leaning towards the dark side) but for the meanwhile here are a couple more of my simple fossil inspired experiments for this week’s Beautiful Beasts work.
Ammonite

Roughs and the block 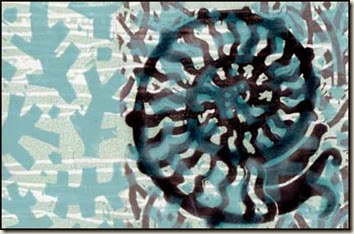 Belemnite I had made three different possible background plates, fronds, wavy lines and a circle and then the lino was a 2 colour reduction.

Chris said “what are you calling it?” “Bertie the Belemnite.” I said.

Oh dear, it just slipped out. I am supposed to be a serious artist but I guess it will stick, as these things have a tendency to do. And one last print.

With wavy background and two colours. I will post more of the process  on Printdaily soon.

And to end, a glorious bunch of Berties on the Bench.

Well, its been that sort of day … more fossils next week…

I have been lost in fossil land for the last few days and it is completely fascinating. I returned to the shoreline and have come back with some more treasures; some fragments of what I think might be Ammonites,  a few pieces of Belemnites, more Devil’s Toenails and some bits of what might be coral.

I have one really beautiful section of a belemnite, see above, the large pointed piece, which I think is a Cylindrotheutis puzosiana. It is the fossilised internal end bit of one of these:

which was once one of these:

Like the Gryphaea, the Belemnite fossils were also thought to have various different origins and properties. The strange smooth shape gave rise to names such as Devil’s Fingers (more delightful devilishness), sword stones and gnomes candles but most wonderfully, they were thought to be thunderbolts, arriving after thunderstorms.
Both Gryphaea and Belemnites were thought to have healing properties, for joints and oddly for sore eyes… more folklore to come. The reason we have these fossils is because of the Oxford Clay which lies under the Boulder Clay.

Palaeontologist and Palaeoartist (very cool)  Mark Whitton has a couple of excellent blog posts about the Jurassic Oxford Clays here. This image from his blog shows the extent of these treasure filled clays. 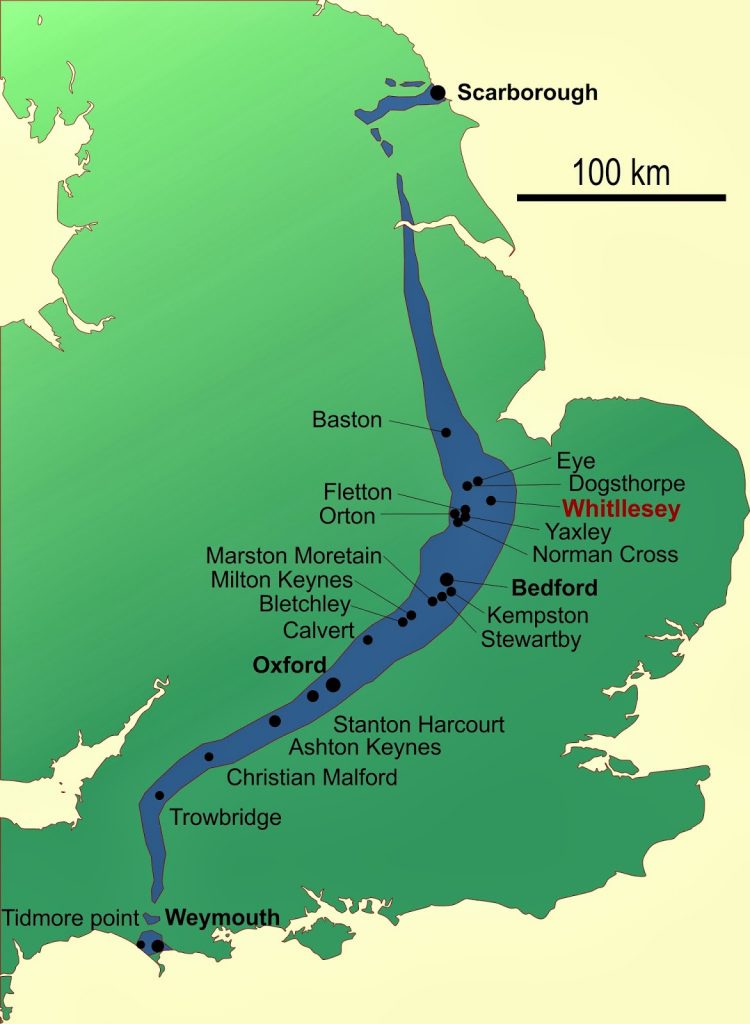 The extent of the Oxford Clays.

Talking to local people there are fewer fossils here than there used to be as the banks have been shored up with boulders to stop the erosion, but there must still be quite a few and I have only cast a very untutored glance over the shoreline.  I am trying not to let this get obsessive but I can see how you might get the fossil hunting bug. On the creative front I did get some printing done. This is the result. You can see how I got there at Printdaily:

“Beginnings” are always exciting and surely nothing can be more exciting than the earliest forms of life. Fossils, I thought might be the perfect place to start my year of exploring the world of Beasts. This first week then will explore my local fossils. I live by Grafham Reservoir whose shoreline is littered with shelly fossils. They are mostly Gryphaea remains, otherwise known, delightfully, as “devils toenails”. 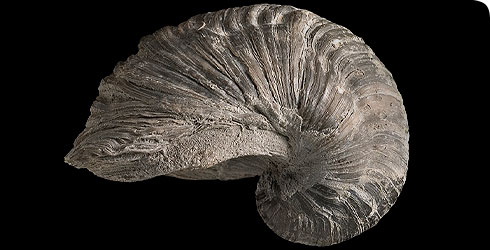 This beautiful image is from the Natural History Museum’s page on the Gryphaea of Lyme Regis.
The ones we see here are much more weathered and misshapen but there is still the magic feeling  of handling something so very ancient. They are from the early Jurassic period approx 199-189 million years ago. There must be millions of them here. Most of the ones from the shore here look like this:

A typical piece of the “shingle”in today’s sun. It’s mostly made up of bits of graphaea from a bay on the reservoir that I, really creatively, call Devil’s Toe Nail Cove. 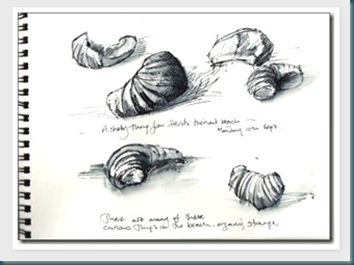 Devils Toenails 2012 Sketches from earlier P&L post, inspired by their odd shapes. In life the Gryphaea were bivalves and relatives of our oysters. From Bristol University’s site  Fossil Types

GRYPHAEA (or Devil’s Toenail): An extinct genus of bivalve. It is believed to have been an unattached recumbent recliner on the sea floor, with its very own self-righting mechanism if a strong current knocked it out of the sediment.

“As a bivalve it possesses two valves. The valves are markedly unequal in size and shape, the left valve is strongly incurved, the right valve is small and flat. The left shell is thick and its surface is marked with numerous ridges. They lived on the sea floor with the flat right valve facing up, it probably acted like a lid, when open allowing water carrying oxygen and nutrients to flow in and be filtered out of the water.”

Having read this, it now makes more sense of the shape. 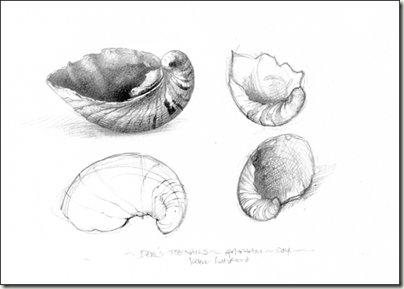 I did find one today with a fraction of the “lid” intact. See the drawing top left. It explains some other odd shaped things I have found.

Devils Toenail?
The name does seem rather obvious when you see the gnarled and twisted shapes. Some may have thought they were the actual  toenails of demons. In that case there were legions of demons around Grafham, which could account for quite a bit. More about these strange creatures, other local fossils and their inhabitants tomorrow.

The  reservoir shoreline is being exposed a little more every day as the warm windy weather continues. Rocks are left high and dry and thistles are edging relentlessly into fish territory.

The crusty edge of the land is developing the flaky cracks and deep fissures of a high baked loaf. Big sandy rocks interspersed with pebbles and shingly sand are splitting and crumbling.

The graceful weeping willows barely brush the retreating surface of the water. 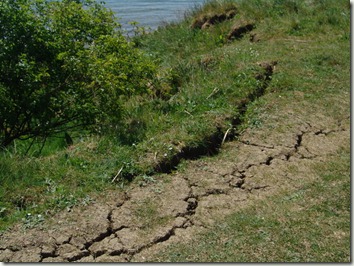 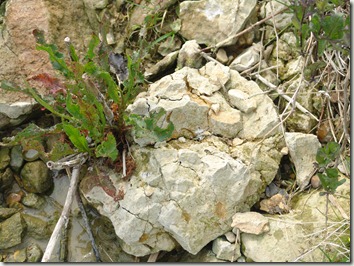 On the land side the bleached white world of shoreline stones and pebbles is patrolled by many tiny black spiders .. what they eat I cannot imagine?

They are skittish and shy and scamper about their mountain ranges casting spidery little shadows and stopping to bask in the sun from time to time. 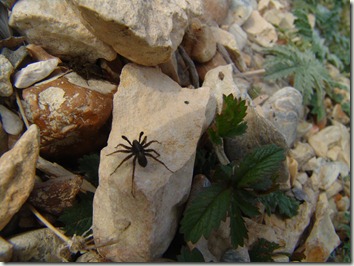 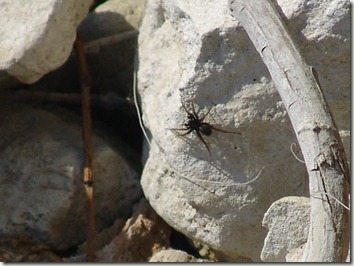 There are occasional well disguised little jumping zebra spiders too. 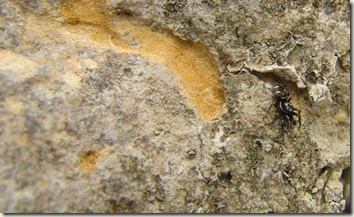 They, of course, pay scant regard to their ancient landscape but some of the intermittent shingle beaches seem to be almost entirely made up of lumpy fossil gryphaea, bivalve shell relics of another unimaginable age.

I read that the shore line of Grafham water exposes Oxford Clay which is comprised of : 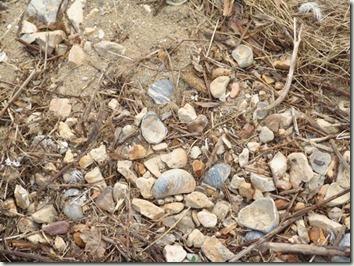 It was in one of these shell beds I found a fossilised twiggy thing of some kind. It is curiously beautiful. The pith inside whatever it was is clearly visible and there is a leaf scar of some sort.  I know nothing about fossils at all but I do find it incredible that I can hold something in my hand that may date back some 154 to 159.4 million Years. 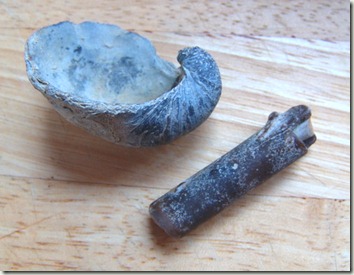 A rock had split to expose this beautiful frondy pattern.. How long has it been hidden? 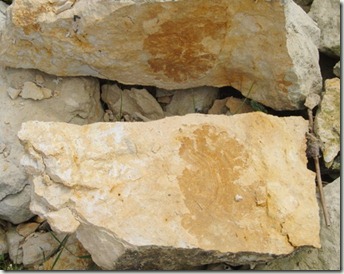 Off shore there are lots of these: 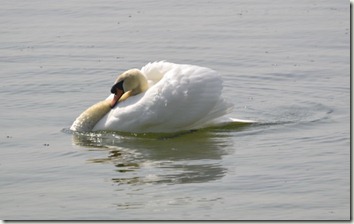 Sometimes regal and graceful and sometimes not. 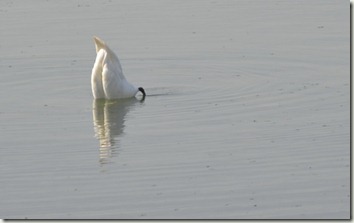 And one day last week we saw a distant swimming snake.

It’s a startling sight, seeing this curious creature, one minute gliding through the water, the next slithering along the ground. It makes you catch you breath.
It was just a pretty banded grass snake equally at home zigzaging silently through water, as coiling around the rocks and pebbles on the beach. It was quite difficult to see, with just its head above the water. Sometimes it swam completely submerged. 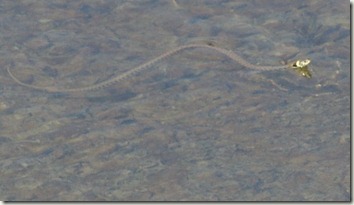 I was even more surprised to see it later that day but much further round the reservoir. Both of us were startled.  I was photographing a bee which was investigating an old tree stump by the water when the snake suddenly appeared, winding itself round the base of the roots. 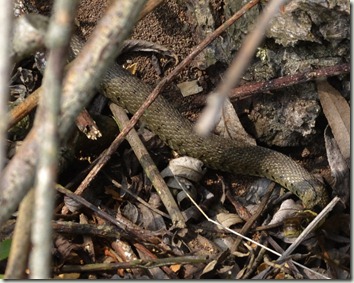 I wish I had been quicker and been able to take a better photograph. I have not see it since.  Shore lines are so fascinating and, yes, there are bees as well. Taking advantage of the sandy banks for a nest site, an Andrena of some kind disappears down a hole, stalked by a ubiquitous, opportunist and sinister Nomada bee. 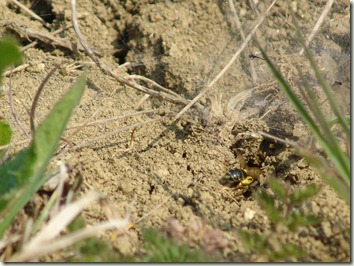 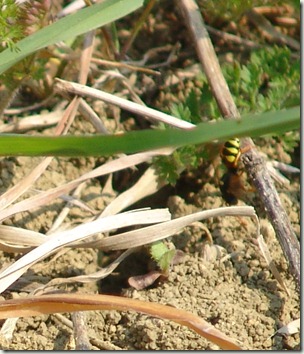 And we are still lulled to sleep by the humming house, the Mason bees are still busy.