I have been reading “The Humble-Bee” by F.W.L. Sladen. I have the 1912 edition borrowed from my local library, on loan from some other distant library in the USA and it has to go back tomorrow.
I am reluctant to let it go, very reluctant. It’s a piece of Bumble Bee history being the first in-depth study of Bumble Bees and their behaviour to be published in English.
Written in a similar style to Fabre where observation and affection are given equal billing it is a delightful, informative and engaging read. 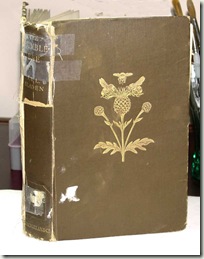 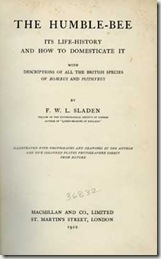 Sladen published this book in 1912 at the age of 26 which seems young enough but it was preceded by a 40 page pamphlet which he wrote and published at the tender age of 16.

“The title, scheme, and some of the contents of this book are borrowed from a little treatise printed on a stencil copying apparatus in August 1892.”

What Frederick Sladen calls his “little treatise” was in fact an already knowledgeable study of bumble bees and their behaviour.

I wonder if any sixteen year old these days could produce anything so wise and careful. He was fortunate to be born into a wealthy family with the encouragement of private tutors, but it is still an outstanding achievement.
One of eleven children he lived on the family estate at Ripple Court, near Dover in the UK (which is curiously only a few miles from my last UK home. If only I had known !).

Here he would find bumble bee nests and move them to a place in the garden where he could not only observe them, but care for them with the concern of a fond parent, protecting his bees from parasites, predators and inclement weather.
The book is full of scientific information, species descriptions and  lovely anecdotal observations.
He keeps a nest of B lapidarius in his study and watches them as they fly in and out of the window while he works, he cares for a crippled B terrestris Queen, finds foster mothers for abandoned broods and tirelessly removes earwigs, millipedes and ants from the nests.

There is of course the scientific collector about him and he describes how to make a collection of pinned specimens, which still makes me feel queasy.
Although I have been grateful for specimens from others I just can’t be the one to deliberately end their little lives.

It’s so easy just to run out with the digital camera now, take a millions shots, hope that one of them will be OK and casually delete the rest.   But if Mr. Sladen was not so fortunate in his technology the excitement and possibilities of photography back then must have made every effort to photograph a living bee worthwhile, and a leap of faith.
On June 17th, 1911 he is endeavouring to take a photograph of a B terrestris Queen on her nest and even gives her a bit of film star touch-up before the shot.

“I carried the nest to a suitable spot for taking the picture. To make a satisfactory exposure it was necessary for the queen to sit still for about half-a-minute, and several attempts were a failure; but a successful one was finally made, and the result is shown in the frontis-piece.

During the long ordeal, which lasted two hours, the queen took wing and flew back to her domicile four times. Each time I caught her in my net, and on the last two occasions she was quite pleased to find herself confined therein, having quickly learnt that this was the prelude to coming back to her nest, and she showed great eagerness to find her brood when she was placed on the photographing table, knowing perfectly well that it was there.
Her coat was a little dusty, and she allowed me to brush it clean with a camel’s hair brush as she sat on the brood, just before her picture was taken. This nest eventually developed into a very populous colony. 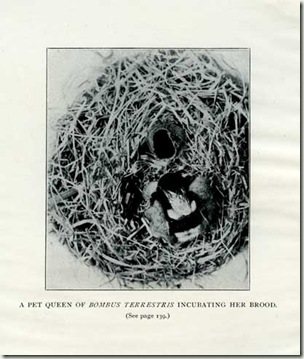 Frederic Sladen’s photo of B terrestris on her nest 1911

The book also has very good colour plates from photographs of his own collection, which makes it seem quite modern. Sadly it seems the original photos were lost and modern editions only have scans of the old printed pages. 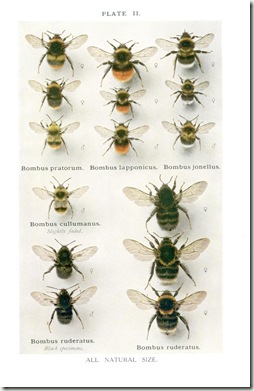 If like me you can’t afford the 229.00 UK pounds for 1912 edition you can buy a print-on-demand edition via Amazon.
A better option, but still expensive, is the Logaston Press edition from 1989 which has a facsimile of the original 1892 “little treatise” in the appendix.
However you can read and download the whole book here at the outstanding resource that is the Biodiversity Library, ..it’s just not quite the same as the original though, is it?

It has been a delight and a privilege to hold this lovely, tatty, well thumbed old book in my hands. I wonder where it has been in the last 100 years?
Who else has pored over its wonderful contents? And who else after reading it, felt that need to rush out into the garden to look with new eyes at what is going on around them?
Yes, I am extremely reluctant to return this book.