Albuquerque I liked. It was our first stop and our first beer was on the old Route 66, which we followed for some time on this trip.
There was much to do and see and the upcoming annual Balloon Festival must be wonderful but we had only one day to do as much as we could so headed for the museums, which are particularly excellent.

The New Mexico Natural History Museum has fabulous exhibits, beautifully displayed. There are wonderful murals, one huge wall by Ely Kish in the Jurassic exhibition room and many others. The reconstructions are impressive and atmospheric and I have a huge admiration for the, often unsung, artists who make these painstaking models and recreate scenes of another time. Their attention to detail, research and portrayals are executed with more sheer artistic ability, knowledge of composition and colour than so many acclaimed modern figurative “artists” I have seen recently. I have written before about the wonderful Charles Knight in a previous post here and the whole subject of recreating long past imagery (without the crutch of a camera) deserves a much more detailed post.
It is a really wonderful museum for an artist with the inspirations of huge sculptural bone structures, fossils, exquisite petrified wood, and bizarre creatures. To spend a couple of weeks drawing there would be heaven. 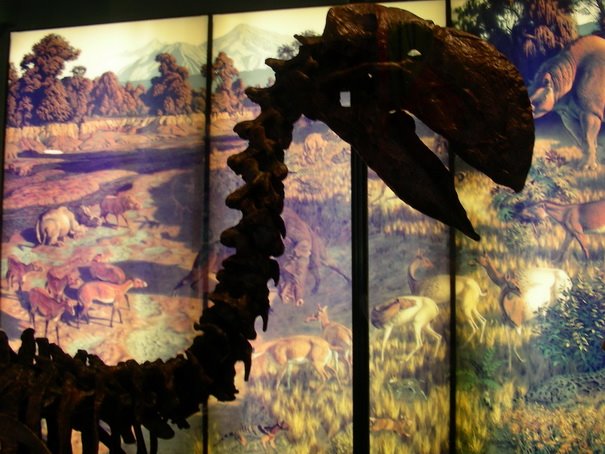 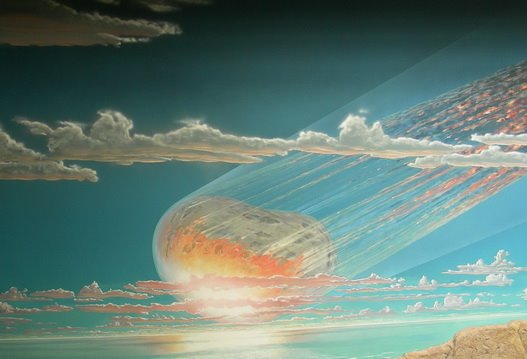 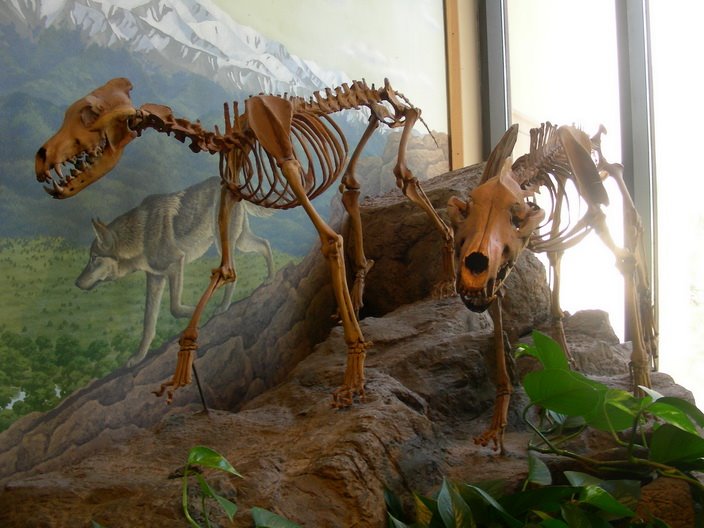 From the wonders of creation to the horrors of destruction and the adjacent National Museum of Nuclear Science and History. I understand the quest for knowledge but this is a sombre museum of the human “achievements” in ways of slaughtering each other. There are sensitive accounts of agonising moral dilemmas and decisions as to what to do with this terrible new power but the Hiroshima and Nagasaki exhibits are particularly awful. Oddly enough I had written about the surviving ginkgo trees from Hiroshima only a few days previous to this visit. The museum (website here) tries hard to put things in perspective and points out the peaceful uses of nuclear power but it’s hard to be drawn away from its terrifying destructive potential. The juxtaposition of these two museums is thought provoking but I wonder how many perceive the irony. 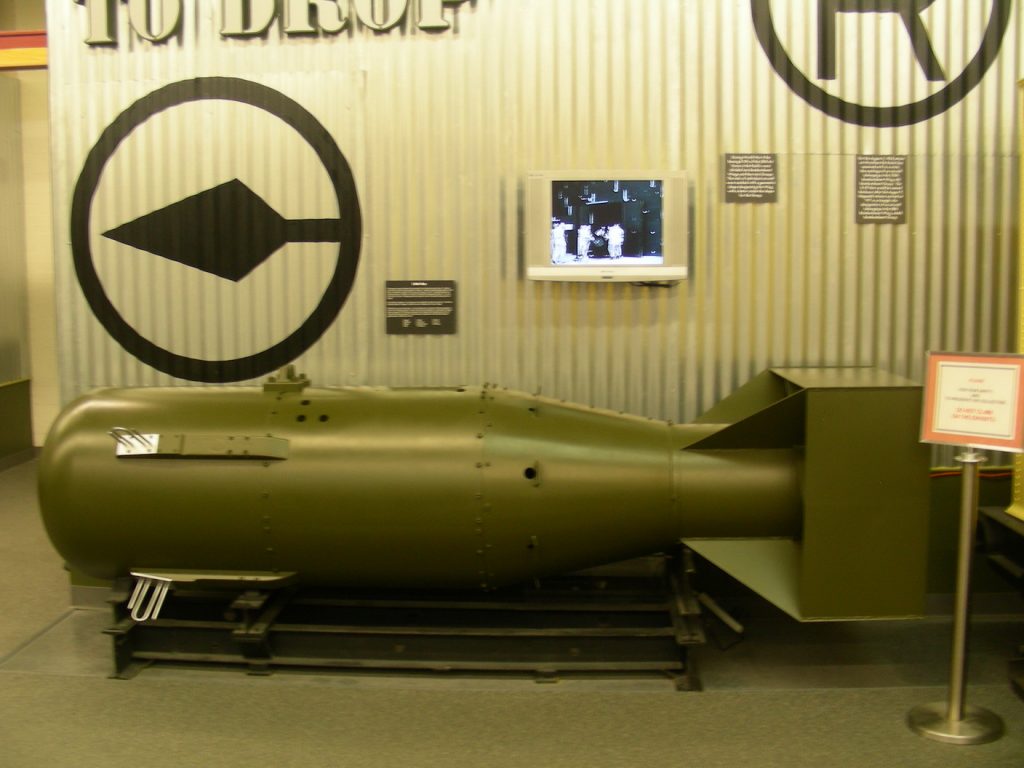 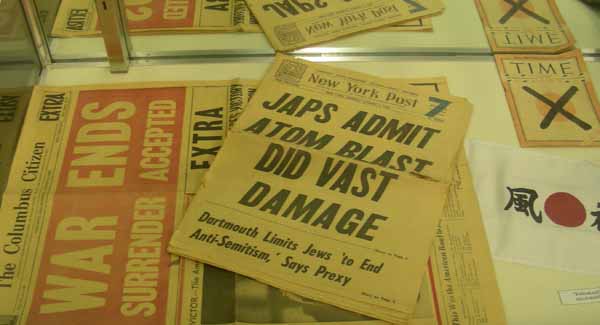 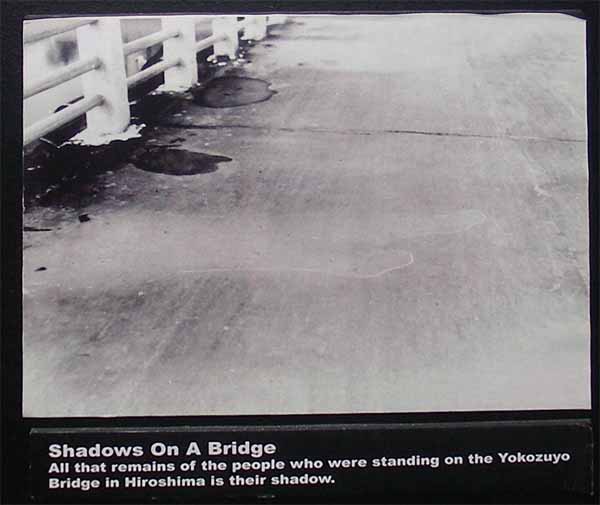 One more excellent museum here was all we had time for but I was lucky to catch the last day of an exhibition of the work of Ernest L. Blumenschein at the Albuquerque Museum of Art and History. Lucky because it served as a great introduction to the original artists who settled in Taos and their genuine responses, albeit through the sometimes romanticised eyes of artists, to the New Mexico landscape and peoples. In his own words his almost chance discovery of this area in 1883 was a revelation. He and artist friend Bert Phillips had set out on a sketching trip starting in Denver and making towards Mexico. A damaged cart wheel sent Blumenschien off towards Taos, on horseback, wheel in hand, to find a repairer and so he discovered this area which was to be the inspiration to so many future artists.

“No artist had ever recorded the superb New Mexico I was now seeing. No writer had ever written down the smell of this air, or the feel of that morning’s sky. I was receiving under rather painful circumstances, the first great unforgettable inspiration of my life. My destiny was being decided as I squirmed and cursed while urging the bronco through those many miles of waves of sagebrush. The sky was a clear, clean blue, with sharp, moving clouds. The color, the effective character of the landscape, the drama of the vast spaces, the superb beauty and serenity of the hill, stirred me deeply.
I realized I was getting my own impression from nature, seeing it for the first time with my own eyes, uninfluenced by the art of any man.
How absolutely marvellous that must have been.

His landscapes are chunky with thickly applied directional brushwork which adds to the slab like shapes of the mountains. I was particularly interested in the “solid” treatment of his skies, the clouds seem to be carved out of the same rock as the landscape. If they seemed heavy or possibly a stylistic device at the time, when I was actually in the landscape a few days later, it all made perfect sense. The skies are terrific, massive and dominating, the tangible clouds hang low on the horizon and are just as he painted them.
We just didn’t have time to get to Taos itself but if you go you can see his home here . 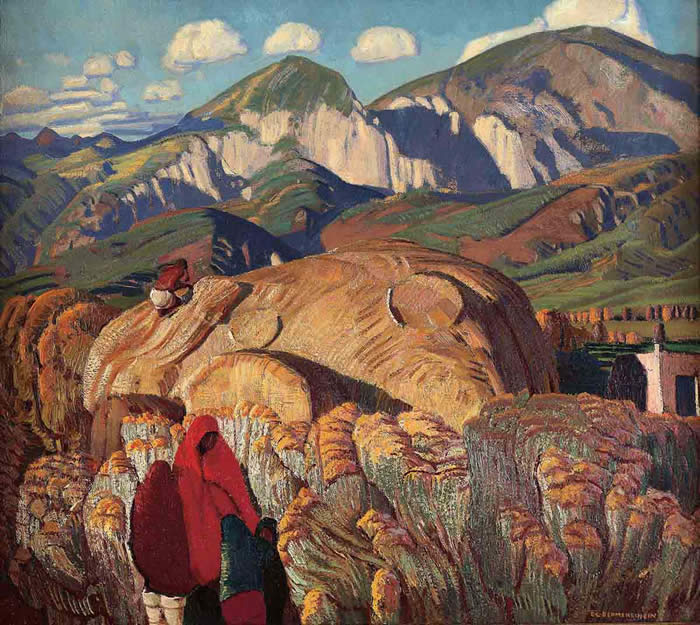 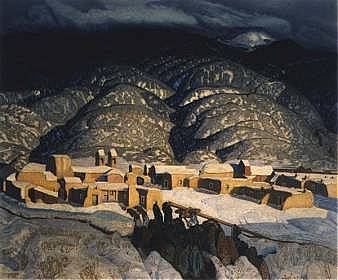 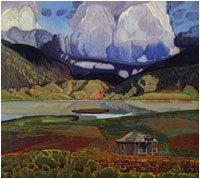 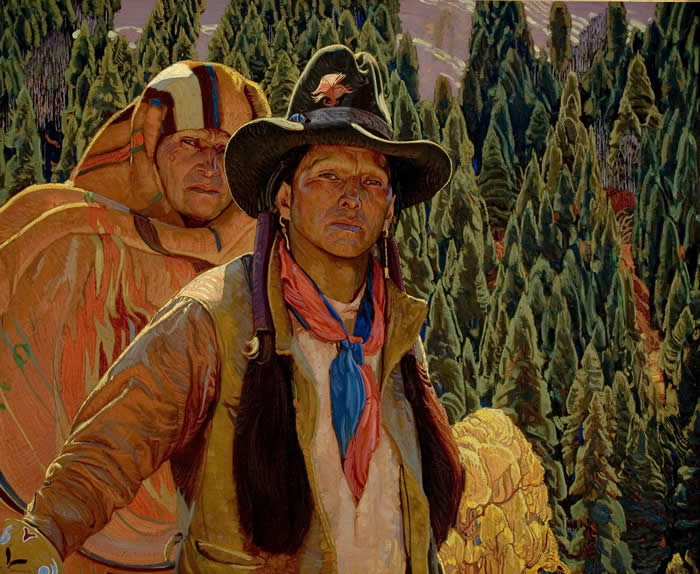 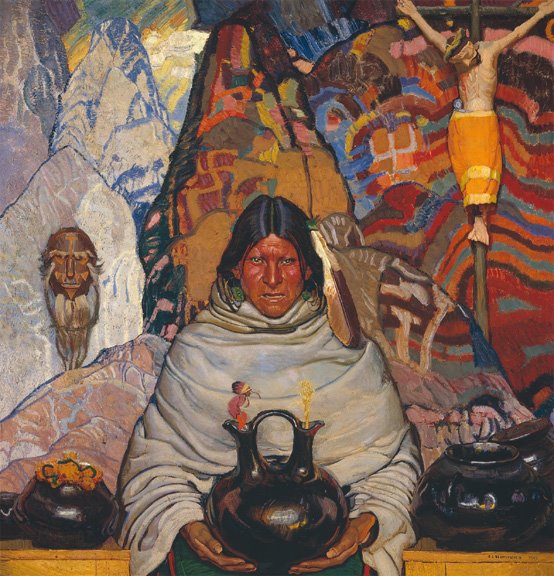 There were many other paintings, small sketches and photographs in this excellent gallery and museum which were made in the earlier part of the 20th C. They describe and illuminate this beautiful area, its people and their life, before the commercial artist copyists, who now line the streets of Santa Fe, arrived.