If you have any interest in honey bees, honey, their history and the different traditions around the world you will spend hours looking at the fabulous site The Honey Gatherers which shows the photographs of Eric Tourneret, Bee Photographer and Photo Journalist.

From different parts of the world, there are portraits of the keepers and honey seekers and of course the bees themselves, their life cycle and their history, this is a magnificent collection of photographs, all annotated. 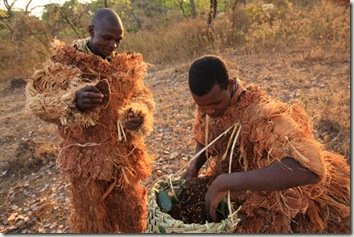 “After a very poor harvest, the honey gatherers take off the heavy suits that protected them from stings” from the Cameroon section 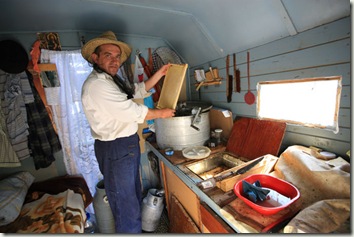 “Constantin Cazan has come to help his father Gheorghe during the two days of harvesting and extracting. The extraction takes place in the cabin of the converted caravan” from the Romania section. 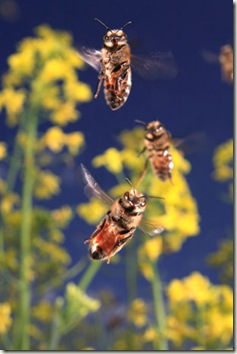 “Foragers approaching their hive in a colza field.The bee’s muscles allow it to flap its wings 400 to 500 times per second to allow a speed of 25 to 30 kilometers per hour with its maximum payload.” from Life in the Hive section He is meticulous in his work, here is an extract from his site about how he took the above photograph:

….the photo looking directly at the three bees in flight took a full week of work in a colza field. A hive was set up in the area that provided the desired background and a false hive containing the camera was set up just beside it.
The site was then encircled by studio flashes for improved lighting. Éric sought to capture an original shot by removing the real hive filled with bees to fool the field bees upon their return. After four days of fruitless shooting, he found it necessary to change techniques and asked a swarm-catcher for a batch of bees… “I put the queen and a few bees in a cage in the false hive, and they immediately began fanning.
The bulk of the swarm in another, smaller hive ten meters away began to stir and then, in one dense, airborne throng, the bees moved towards my camera.
I blindly started shooting while doing my best to deal with the bees that were landing on the optics. Finally, after a week in this Camargue field and 4,500 shutter releases, the photo was in the bag. It surpassed my every expectation.
Not a frontal shot of one bee in flight in its natural environment, but three bees dancing in the air before me.”

4,500 shutter releases..wow. this is the most beautiful stuff I have seen for a long time.