My very good friend and gardener, Pedro, delights in finding new and exciting things for me to draw and write about. Today he was so pleased to give me this strange and wonderful nut as a Halloween gift. It couldn’t be more apt! This must be the oddest pod I have seen to date.
This is the seed pod of Trapa bicornis, the Black Horn Nut, Bat Nut, Devil Pod, or Buffalo Nut, an aquatic plant native to western Europe, Africa and Asia. As far as I know it doesn’t grow at Leu and in fact is another invasive and unwelcome plant here. It is forbidden to import this plant into Florida as a living species but it is easy to find them in the wonderful Asian supermarkets here, where you can buy them to cook. Somehow it seems even more strange that these odd “nuts” should be edible.

They do have to be cooked to remove the toxins but were a staple food of early civilizations and were eaten in the UK by Neolithoic man. They are also confusingly known as “water chestnuts” but are completely different from the canned variety of water chestnuts much used in Chinese food which are the tubers of Eleocharis dulcis.
The taste is apparently very much like chestnuts. This lovely photograph is from Kiki Rice’s blog where she has a simple recipe for the boiled nuts and some other delicious Vietnamese recipes here 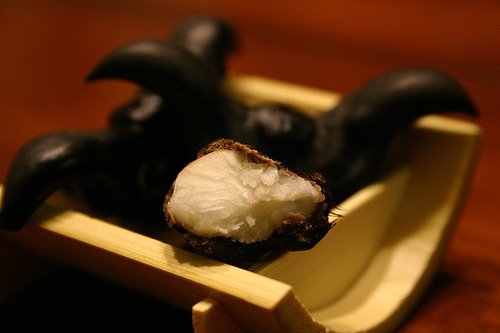 They are toxic if uncooked but they are delicious (edible, of course) when cooked with rice and vegetable. I love to eat them boiled just like roasted chestnut. They taste like chestnut but have more texture. An average nut is about 3 inches long. Cover them in water and some salt, bring to a boil and simmer for 25-30 minutes.

It is a rampant and invasive aquatic plant and there are other Trapa species, one Trapa natans has four stout horns rather than two. 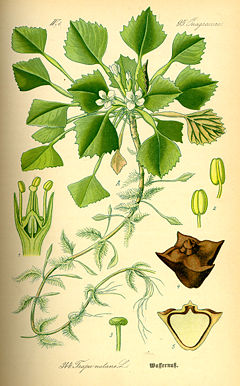 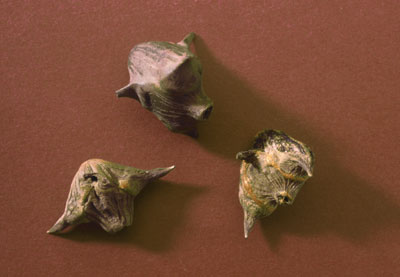 This little nut may look sinister but in China, where the plant is known as the Ling nut, the bat is considered lucky because the name “Bat” (Fu) sounds just like the word for happiness (Fu). Bat Nuts are eaten at the lovely mid autumn Moon festival in China where you can see the goddess Chang’e dancing on the moon, eat moon cakes, and sing moon poems and watch the full moon rise in company of friends and family.
It is also considered a lucky talisman to place over the door to keep the devil at bay.
This photo probably gives the most sinister view of this innocent little thing, is the germinating pod with a snaky devils tail growing from the top! 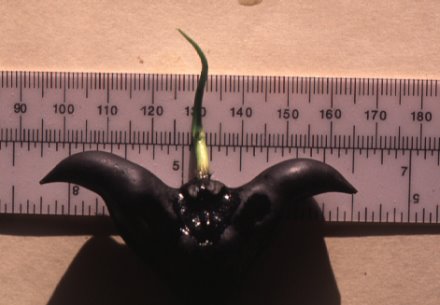 Images from Texas and AM University, vascular images page here

This will be my first USA Halloween. When I was young we marked this evening as All Hallows Eve, more for the “All Souls” aspect of it, remembering the dead rather than tormenting neighbours. Then, we would be much more excited about the imminent arrival of Guy Fawkes night and the promise of the magic of fireworks and sparklers and bonfires. We did occasionally make Soul Cakes though. “Souling.” was a old custom where Soul Cakes” ( a sort of flat current cake with spices, saffron and marked with a cross on the top) , were baked and given to relatives, neighbors or the poor on All Souls’ Day. In return, those who received the cakes would pray for the deceased relatives of the giftor to speed their soul’s passage to heaven.
When we lived in Spain there was a particularly lovely custom in the village of the all souls candlelight procession to the cemetario where the lives of deceased are celebrated with respect, affection and a picnic the following day. Food is left out for the dead, whose souls were expected to return to their former homes on All Souls’ Day. It is a time for family gatherings and memories.

This nut is such a perfectly formed object that drawing it probably doesn’t do anything more for it. It is different on both sides, dark purple brown and if you knew no better you would think it was made of plastic, it even seems to have a seam around it. So today just a couple of sketches .. And anyway I am going to be busy making soul cakes…
On this night of mischief, if I were so inclined, I think I would slip away to the side roads around the lakes here where the elegant houses display their mixture of Obama and MaCain garden signs and swap them all around..
______________________________________ 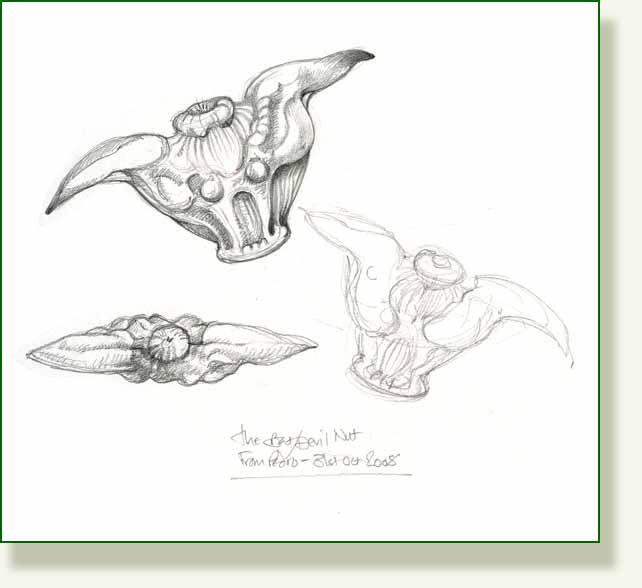 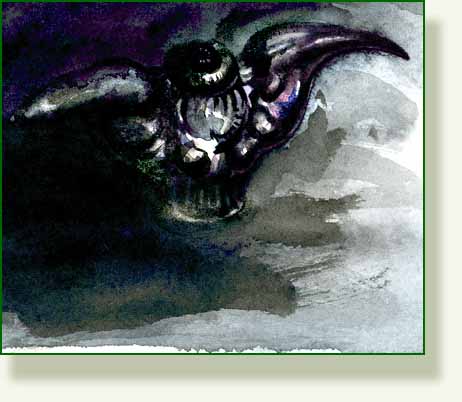