Yesterday I heard on the radio that, due to food shortages, it is becoming conceivable that the EU vegetable police who ensure that no deformed or non-conforming items of fruit and veg can disgrace the hallowed counters of the supermarkets, may in fact be relaxing their rules. Regardless of how things actually taste we have been subject to a dreary conformity and a quite horrible dumbing-down of the glorious variety of odd and interesting produce, just another symptom I suppose of a society that seems to value the superficial over the important.

“We ( now) want to have two classes, allowing supermarkets to sell funny shaped vegetables,” said Michael Mann, a spokesman for the European Commission.

Change however may be slow. The rules on bananas are remaining the same but at least cucumbers will be allowed to wriggle a bit.

I quote from the ‘Independent’ article all about knobbly veg here

“Bananas
The rules for bananas will remain unchanged, meaning both overly bendy and straight fruit cannot be labelled class one. EU directive 2257/1994 dictates that top bananas must be “free from malformation or abnormal curvature of the fingers”. Regulation bendiness helps speed packing and prevent damage in transportation. Class two bananas can have full-on “defects of shape”.
Cucumbers
Directive 1677/88 stipulates that class one cucumbers may bend by 10mm for every 10cm of length. Class two cucumbers may bend twice as much. This will be relaxed.”

A footnote to the cucumbers is that enthusiasts will no doubt be very interested to know that a new and delightfully considerate variety has been developed to ensure propriety at that elegant afternoon tea party. You will be able to wolf down those dainty crustless cucumber sandwiches without fear once you have ascertained that your hostess has cultivated only the “Burpless Tasty Green” variety. According to the blurb, “the fruits are not giants like most other Japanese varieties – cut them when they are about 9in (23cm) long and enjoy the crisp, juicy flesh from which both bitterness and indigestibility have been eradicated.”

However, in support of the mishapen and the indigestible, I have made a sketch today of a giant of a radish. This I bought, along with a cobra shaped courgette, from Hector at the Winter Park Farmers market. He has some fine fruit and veg and some herbal teas that sound as though they would rival the yaupon holly drink for their purgative qualities. He and I talk about vegetables, be prepared for some more interesting specimens. 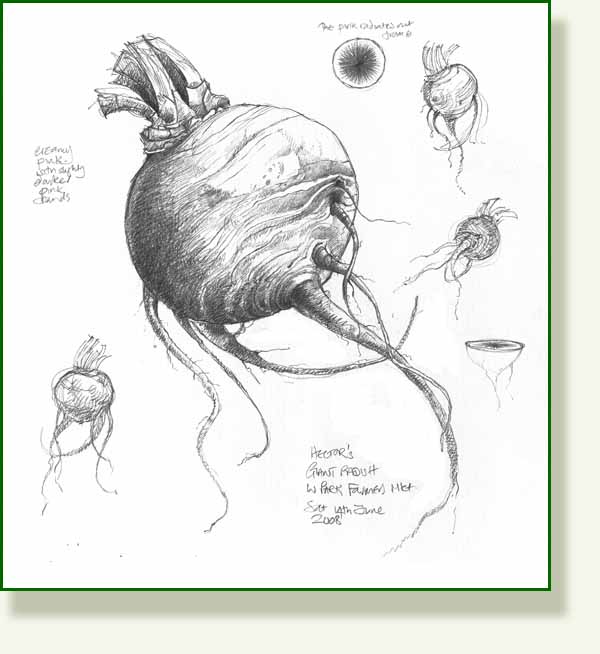