It’s in the name, the Land of Crows, a conjuring up of a bitterly cold, bleak fenland scene.
That’s exactly how it was a couple of weeks ago when we went to have a look at the church and remains of, what was once, one of the most important monasteries in England.

It’s many many years since I last passed that way and it’s a curious sight, whalebone-like ruins attached to a later church set in flat fenland on what was once an “island”in the marsh. It makes you wonder what form of madness drove Guthlac in 699AD, to find a home there.

He arrived by boat seeking peace and quiet and made his home in the side of an opened, looted barrow. The land stayed soggy and inhospitable for centuries until the reclamation of the Fens.
Guthlac became a revered man and the subject of pilgrimages so I am not sure his life was quite as peaceful as he had hoped… and then there were the demons. Here is a marvellous description of what he encountered:

“The place for his retreat was a solitary and almost inaccessible  island in the Fens of Lincolnshire which was withal most grievously haunted by fiends.
Here he built a hermitage but the fiends were by no means pleased with the company of the holy man and formed a league, offensive and defensive, to expel him from their territories and did every thing that could enter into their demoniacal imaginations to annoy him.”

They bounced through the chinks of his hut and scoffed at him not suffering him to say his prayers for their shouts of rude laughter. Often when he ventured abroad they bodily seized him and plumped him into a neighbouring pool or whisked him through thorns and bushes.
In fact there was scarcely a trick which they did not play on this holy man. One very stormy night when occupied as usual in prayers and vigils, a whole legion of unclean spirits suddenly invaded his cell. They came through the door, through the chinks, through the roof, down the chimney and out of the earth like a dark cloud.

The name Crowland, I read, was originally Croyland but Waldie again tells me that the crows became St Guthlac’s favourite companions. Bringing him food and that…

The Isle Croyland or Crowland has had a tempestuous history,  attacked at various times by Danish raiders, earthquake, fire, Vikings and Oliver Cromwell, but the ruins and Abbey stubbornly remain. It’s part of the Lincolnshire character.
Its fame made it a favourite subject for artists and both Cotman and Turner painted the picturesque ruins.

An engraving after Thomas Girton 1797  from the Tate Gallery.
This is the opposite end of the Abbey from the view I chose.This view is currently shrouded in scaffolding.

I am not always comfortable following in the footsteps of such greats and it was very very cold. We did not stop long but I walked around to try to find an angle that I liked.

The huge remaining arch is impressive and somehow the jostling gravestones looked almost like human forms, lining up to gain entrance to the Abbey, to find some some relief from the bitter wind or perhaps from Guthlac’s terrible tormentors. The sky was dark grey with the threat of sleet. 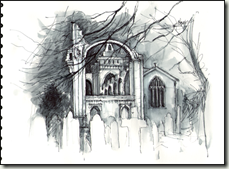 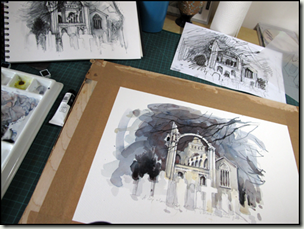 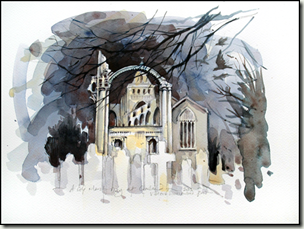 The sketch will be for the Lincolnshire Churches Trust art competition. …and still the cold continues. Spring! Where are you??