Today I have spent most of the day out and about..this morning I went down to Leu Gardens early as temperatures are beginning to heat up now and by the afternoon we have spectacular thunderstorms preceded by intense humidity. I am wondering how I will survive the summer?
Arriving early is good because you have the Gardens almost to yourself….almost. I don’t know if it’s just me but my steps seem to be dogged at the moment by yoga or tai chi practitioners who commandeer a bit of public space (usually the very best bit ) with a mat which immediately transforms itself into a private 50 ft radius “DO NOT DISTURB ” zone. She was on the jetty by the lake, cool elegant and composed in her simple leotard. I somehow don’t think she had a burger for breakfast or had arrived on a bike, I was disheveled and sweaty from my dicing-with-death bike ride. The bad person in me wanted to toss her over the rails to the alligators.. The good person was considering a cheery “hello” but she was deeply involved in that pose that looks like a dog being sick so I though better of it and moved along to find the friendlier Cycads.

After reading so much about the Cycads I wanted to go and see them again but a drawback of arriving early to the Gardens is that you may have to trail blaze the paths which are criss crossed with webs, I am not good with spiders. The cone I had taken a photo of 2 weeks ago was bigger and better but the path was guarded by a very large web and it was too early in the day for spider trauma. To be fair I haven’t seen that many here. The ones I did see today were tiny little jeweled little things… but, believe me, I don’t look hard.
However I did find the cycad encepalartos horridus so I have a drawing of a truly horrid leaflet today(actually one I had picked up at Marie Selby last week) and I did meet up with my friend Pedro the gardener, who showed me some more strange and wonderful things in the garden which I will hopefully get round to drawing in the next few days. In the butterfly garden many big beautiful butterflies are languidly flapping from flower to flower and there is a small glass fronted box displaying the most exquisite chrysalises ( chrysalides) of the monarch butterfly. They are like little drops of jade with gold specs… My photo below does not quite capture the colours. 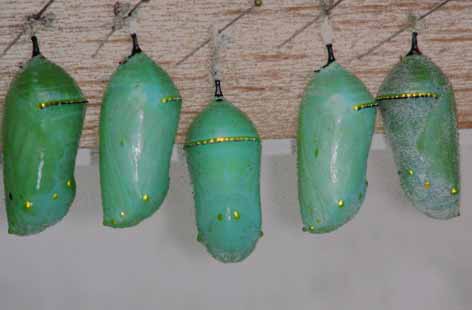 Probably the most spectacular butterflies are the Giant Swallowtails that look like humming birds as they hover amongst the flowers. 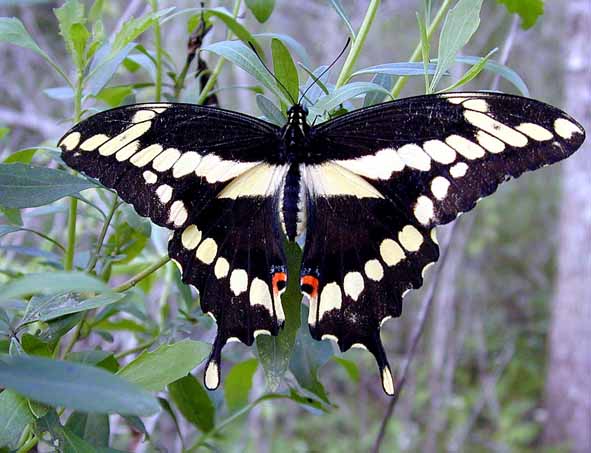 The full leaf of the ferocious Horridus can be 18-24″ They are long stiff recurving leaves that have many intertwined, needle sharp, leaflets. The spines twist away from the plane of the leaf so it can sink its spines into your flesh however you try to approach it. Its native habitat is on exposed slopes provinces of South Africa. . 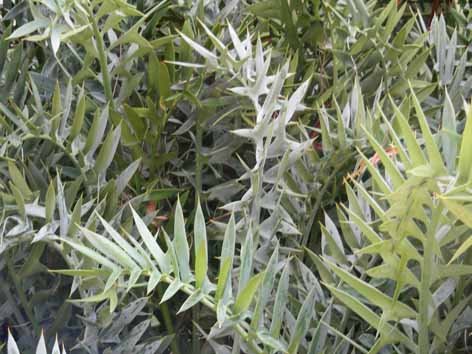 Here is my photo from Marie Selby Gardens 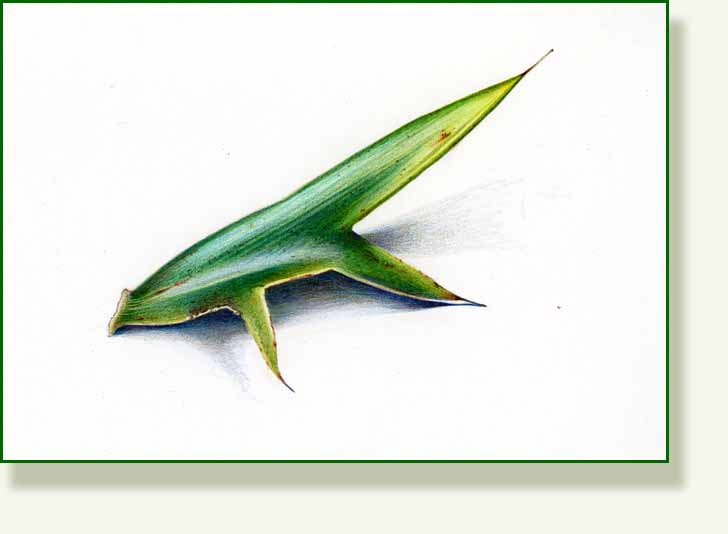