The beautiful and very handsome queen Bombus lapidarius, the Red Tailed Bumble Bee or “Stone” Bumble Bee, from its habit of nesting under stones or in walls.

I sketched this one in November. This is the bee that Thomas Belt back in 1896 felt would be the preferred pollinator over B terrestris for the New Zealand clover crop, mostly because of B terrestris’ naughty nectar robbing habit.
Belt also has a nice account of  B lapidarius’ bad temper.
Read more in my previous posts The Beautiful but Grumpy Bombus Lapidarius and Floral Larceny and Nectar Robbing.

The queen is large and a glossy black with the flame red tail. The workers are much smaller with similar colouring and the males still have the red tail but have 2 yellow stripes on the thorax.

male, left and female/worker right, from my ID sketches.

Because of its rather short temper it might not be the hot choice as an aid to pollination unless perhaps you intend to grow fields of onions, because although these are relatively short tongued bees they do like chives and the allium family in general.

They will spend time clambering around the flower head, which is comprised of many small florets, gathering a sip of nectar at each stop.

Surely every garden must have chives?  When I was home in the summer they were very alive with bees and hover flies. But even without any interest in bees they are so pretty, easy to grow and wonderful to cook with.
I would lift a few potatoes, simply boil them and serve them tossed with butter and fresh chives… delicious.. 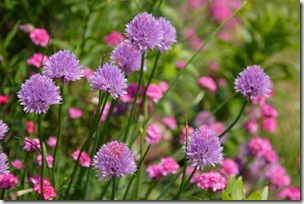 Chives are also very good companion plants, sow them amongst your carrots, tomatoes and brassicas, to help not only to repel bad bugs, but improve both flavour and growth. I wonder how?

I was also interested to read that they seem to help prevent scab in apple trees. The ancient unnamed apple trees at home are full of scab so I will have to send my father some seeds.

Just like cornflowers in my last post, you can add the florets to salads, for both prettiness and flavour, and of course if you happen to be plagued by evil spirits, hanging up a bunch of chives will do the trick.

Deciding the position of the wings is always a problem. Sometimes they can cover too much of the body and therefore the pattern and colours of the bees.

I don’t put too much detail in because they can look much too solid if you paint every vein.  As you can see I still had not decided, even when I started painting.

There had been some of those nasty “bad painting” spirits around yesterday morning,  the ones that make your hand shake when you are poised over that tiny detailed bit, but after I hung up the chives everything went just fine, (I wish). 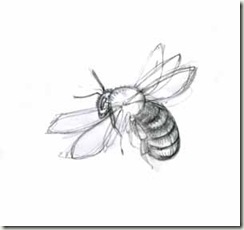 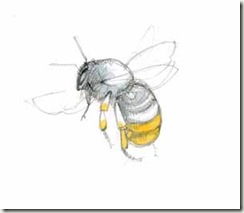 Finally, I settled for the forward wing position 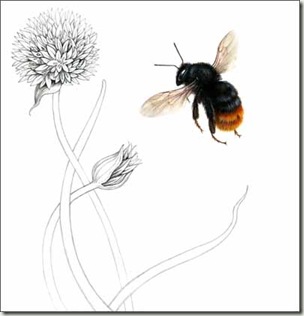