Just the last couple of things from my weekend away, and it wouldn’t be long before I got round to some more pods would it? Again, from near the railroad walk, I found a tatty old Bay Bean pod and a Coral Bean pod with its stunningly red beans inside.

The Bay Bean Canavalia rosea, exuberant, tough, hardy, salt tolerant and very vigorous..it runs, almost literally, along the sand dunes rooting its way along from nodes on the stem and can reach 20 feet in one stretch. The flower is small and a beautiful purple. It’s good for anchoring unstable sandy places and is pretty too, although I am not sure you would want this galloping around a small garden. These beans float and so can be carried by the sea many miles along the coast to spring up in territories new. 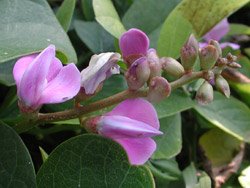 The beans are edible when very young, as are the pods and I think the flowers are too but as with other beans the old ones must be cooked well to remove toxins.
It would seem that Captain Cook ate bay beans during his Australian explorations and in 1788 the Australian Governor Phillip and his crew tried them too. The Surgeon General John White wrote that the beans “were well tasted”, but evidently they had old raw beans for they were soon “seized with violent vomiting”.
The Australian Aborigines cooked and ate the beans and used them medicinally but I cannot find any reference to their use by native Americans.

Coral Beans Erythrina herbaceacan also get carried along by the sea too. The seeds are such a brilliant orange red and so attractive. I love the way these grey black pods split open to show the seeds inside. They are often used in jewellery making in Central America, but they are definitely poisonous, so don’t chew that Mexican necklace too often.
I can’t remember seeing a flower myself but here is a picture from Wiki. 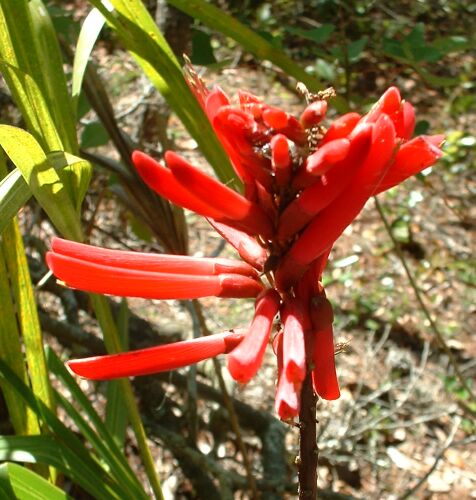 I am wondering what sort of seeds the coral trees will have at Leu. If I had a spare 5 minutes I would be making beautiful beaded things. Bead shops are some of my favourite places and seed jewellery deserves a few dedicated posts which is a very good excuse for going to some bead shops.

This is yet another prickly plant and those of you who get the email subscription will see I am posting Friday 18th (back dated) entry today, the Victoria Waterlily, another terrifyingly spiny plant. 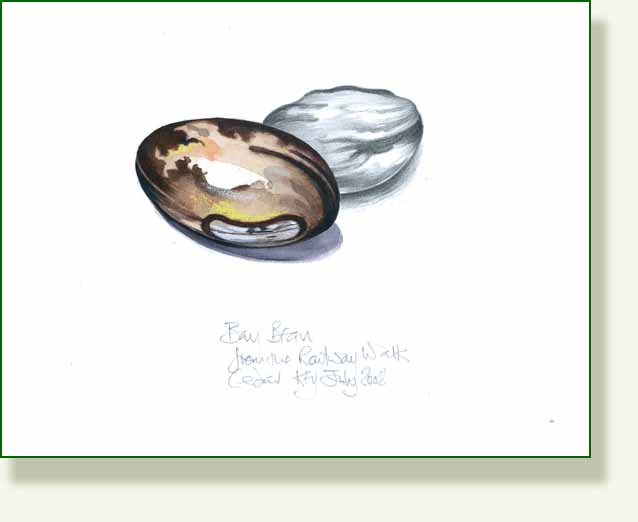 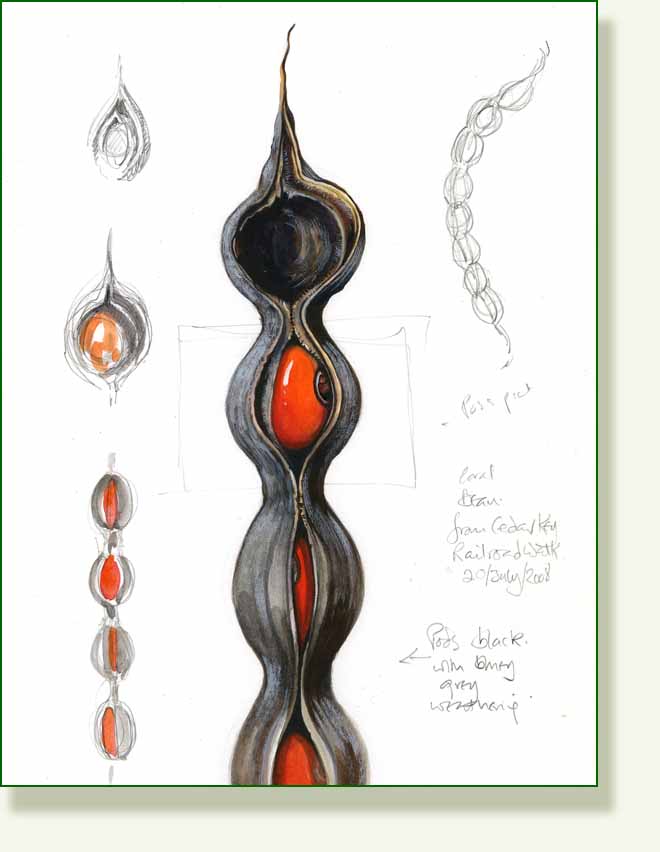 The Water Oak, Quercus nigra, is another tree I saw on the railway track walk on Sunday that was conveniently labelled. It’s too early for the acorns to be developed to any degree but they are still a lovely shape. The other names for the Water Oak are Possom Oak, Duck Oak, Punk Oak. ( I am not entirely sure of the reason for these names, except in the duck oak case, the leaf is said to resemble a ducks foot..a bit.) It is a beautiful tree and would have provided firewood, building timber and shelter to native Americans and early settlers alike.

The railway line from Cedar Key Island ran across to the mainland and all that remains now are the broken stumps of the pilings. 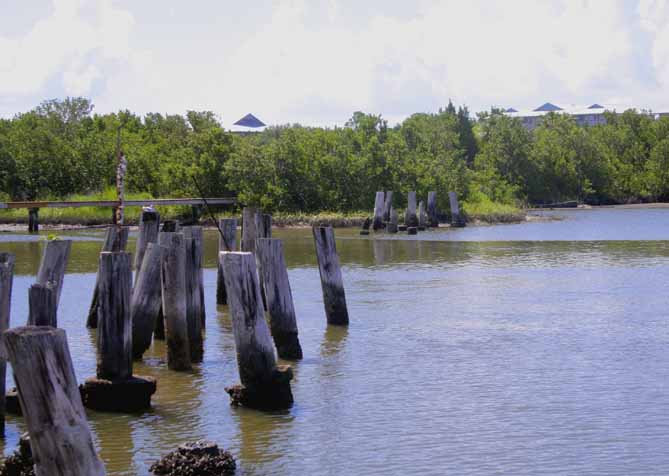 We were the only ones on this little track and amongst several different species of oaks, laurels, the black mangroves and 5 million mosquitoes there was the Spanish Bayonet. A ferocious Yucca, (Yucca aloifolia) with long spiked leaves this just adds to my current run of armed and dangerous plants that can be a hazard to the careless walker in Florida.
John Muir the writer and early conservationist had time to contemplate this plant too. In 1868 he spent 3 months at Cedar Key recovering from a bad bout of malaria which had caused him to break his walk from Indiana to South America. In his account of that journey ” A Thousand Mile Walk to the Gulf” he gives a grim description of malaria, but also tells of the kindness with which he was nursed at Cedar Key. Having now had a close encounter with a Spanish Bayonet I know his description is accurate.

“One of the characteristic plants of these keys is the Spanish bayonet, a species of yucca, about eight or ten feet in height, and with a trunk three or four inches in diameter when full grown. It belongs to the lily family and develops palmlike from terminal buds. The stout leaves are very rigid, sharp-pointed and bayonet-like. By one of these leaves a man might be as seriously stabbed as by an army bayonet, and woe to the luckless wanderer who dares to urge his way through these armed gardens after dark. Vegetable cats of many species will rob him of his clothes and claw his flesh, while dwarf palmettos will saw his bones, and the bayonets will glide to his joints and marrow without the smallest consideration for Lord Man. “ 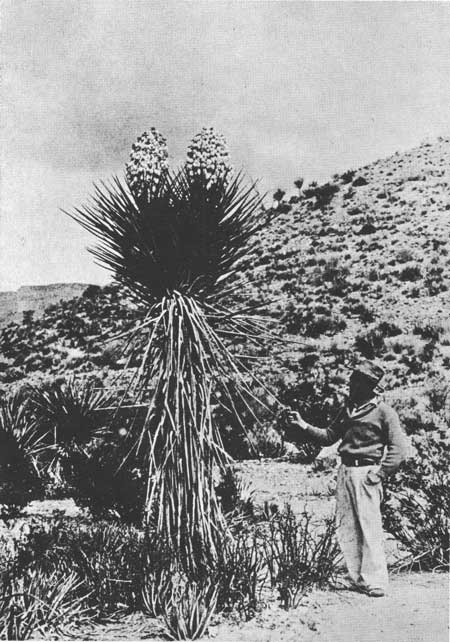 Muir goes on to describe the beauty and the birds too

“During my long sojourn here as a convalescent I used to lie on my back for whole days beneath the ample arms of these great trees, listening to the winds and the birds. There is an extensive shallow on the coast, close by, which the receding tide exposes daily. This is the feeding-ground of thousands of waders of all sizes, plumage, and language, and they make a lively picture and noise when they gather at the great family board to eat their daily bread, so bountifully provided for them.
Their leisure in time of high tide they spend in various ways and places. Some go in large flocks to reedy margins about the islands and wade and stand about quarrelling or making sport, occasionally finding a stray mouthful to eat. Some stand on the mangroves of the solitary shore, now and then plunging into the water after a fish. Some go long journeys in-land, up creeks and inlets.

A few lonely old herons of solemn look and wing retire to favorite oaks. It was my delight to watch those old white sages of immaculate feather as they stood erect drowsing away the dull hours between tides, curtained by long skeins of tillandsia. White-bearded hermits gazing dreamily from dark caves could not appear more solemn or more becomingly shrouded from the rest of their fellow beings. “

We found it still much the same… 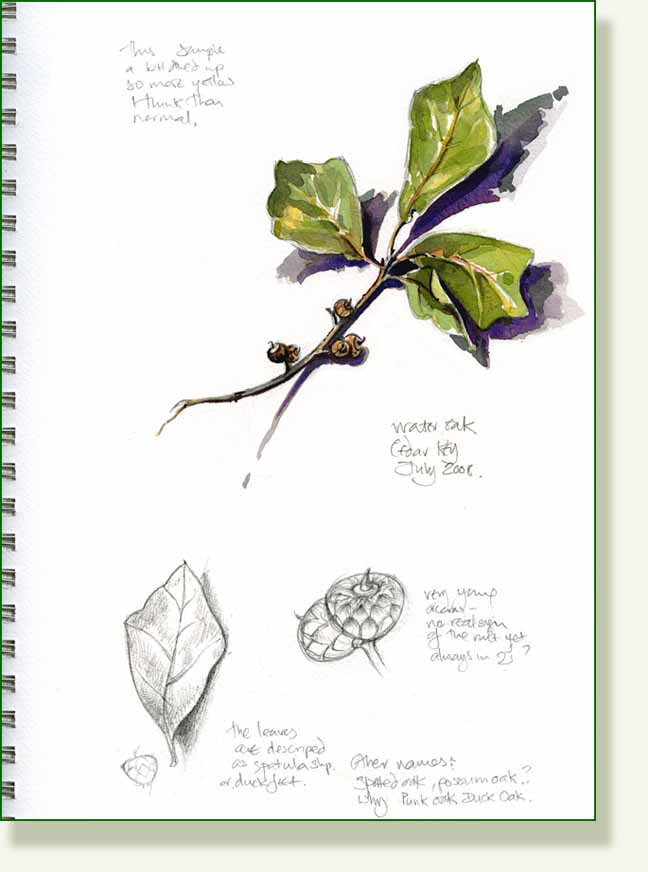 Sunday evening and we have returned, sun burnt and completely exhausted from 3 days on the Gulf coast. We dodged most of the rain, encountered some enormous sponges, learnt about scalloping, ate fabulous fish, saw some very interesting plants, met some very nice people, communed with some ancient spirits and our last day at Cedar Key was just heavenly. I will be retro posting blog entries with a few relevant details but we saw and did so much it would take me a week just to write it up. 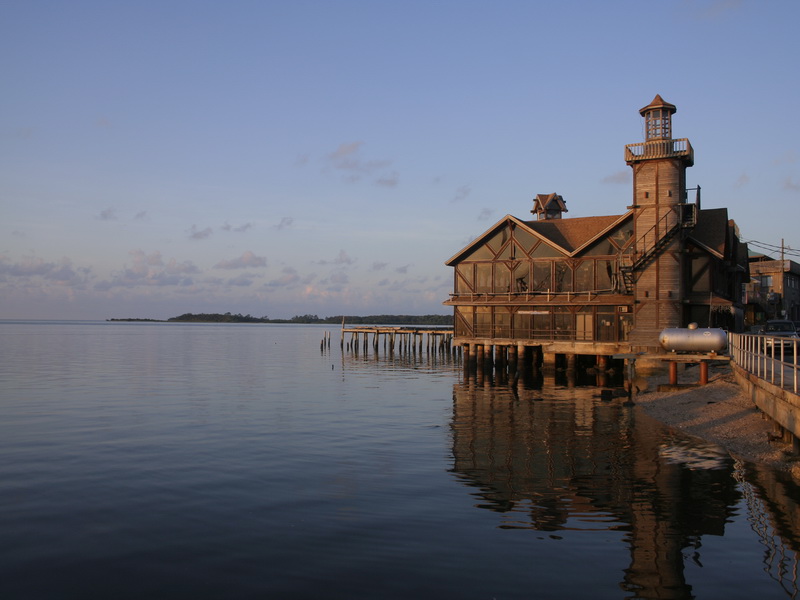 It’s funny how things come around though. At the very start of the blog I wrote about my favorite pencils, Faber Castell my lovely, elegant, sharp, racing green pencils, here and when I go away there is usually one somewhere in my bag with a small sketchbook. While in Cedar Key we took the excellent Captain Doug’s tour to see the outlying islands and some of the wonderful bird life. The boat trip took us to nearby Atsena Otie Key which was the site of the original town, called Cedar Key after the red cedar tree a type of juniper, which grew on the island. Captain Doug explained that the community was once much larger than the current 900 inhabitants, a thriving town and home in fact to one of Faber’s timber mills. I felt I should have jumped up brandishing the pencil I had in my bag but I didn’t.
In 1849, J. Eberhard Faber came to America looking for wood suitable for the booming pencil factory which his brother was running in Germany. This he found in abundance on Florida’s Gulf shores between the Suwannee and Withlacoochee Rivers so he bought both land and timber, floated logs to the Keys, and initially shipped logs over to the factory in Germany.

Planning to expand his pencil empire into America, in 1858 Faber built a slat mill on Atsena Otie and started shipping wooden slats to the newly opened Faber pencil factory in New York. The Eagle Pencil Company followed with their own mill in 1876. Helped by the newly developed first railroad which ran across from Cedar Key to the Atlantic coast the little town became an important port but on September 29, 1896 a powerful hurricane and a 10 foot tidal wave crossed the island, destroying the mills and almost all of the town. A year later the remaining inhabitants left, Atsena Otie was abandoned and a new community built up where Cedar Key is today.
On a short walk just outside the town along the disused railway line we found one of the cedars along with many other, well labeled, native plants. (Very useful for this blog.) The Seminole name for this particular red cedar (Juniperis silicicola) is atcina which gave the island Atsena Otie its name. The red cedar has beautiful aromatic wood which as well as pencils was used for making chests and wardrobes as moths dislike the smell. Juniper oil is distilled from the wood, twigs and leaves and its pretty dusty blue cones are known as berries and the European junipers cones are used to flavour gin. 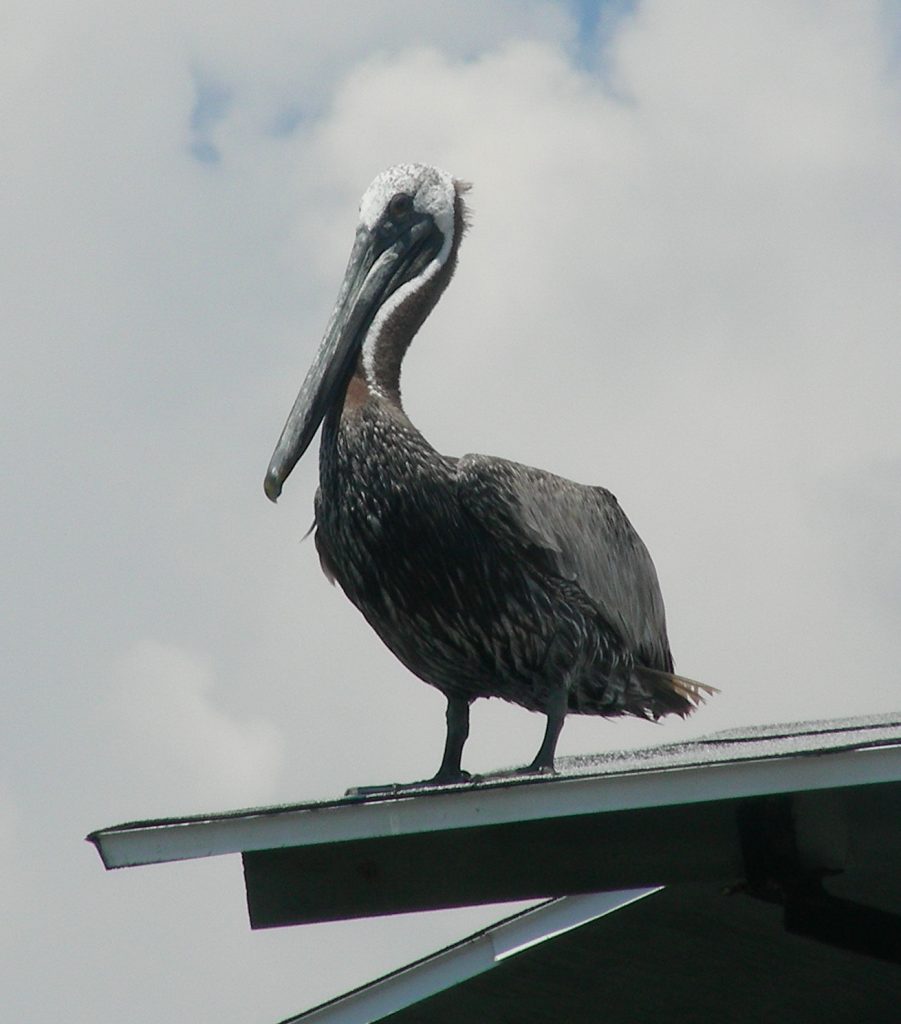 One of the constantly watchful pelicans 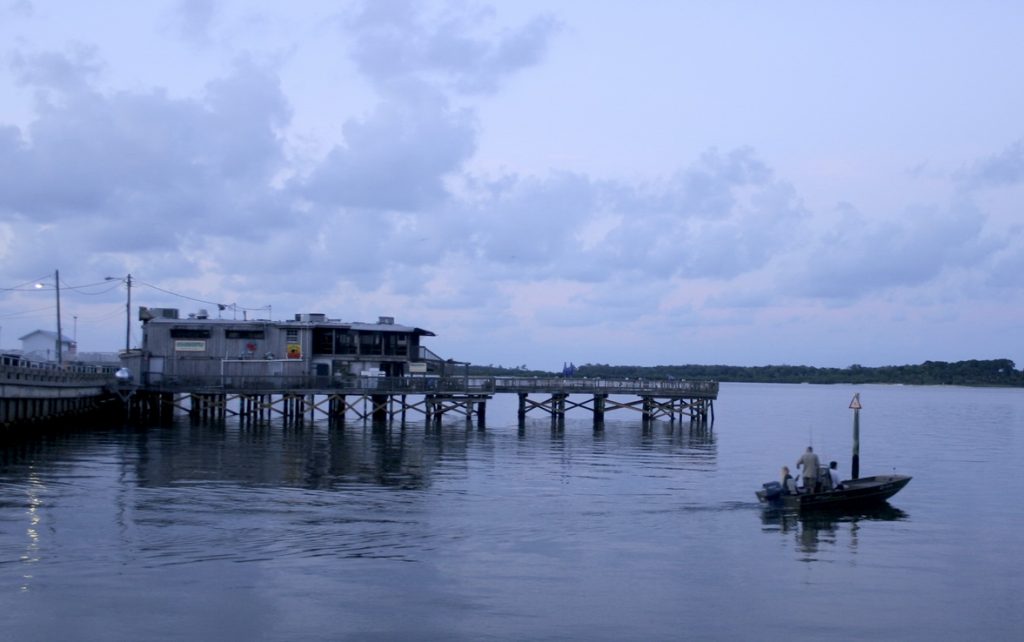 Early morning at Cedar Key from the hotel room, opposite is Coconuts Bar and the fishing deck…very handy.

Cedar Key is just so beautiful with many natural places to explore and when your feet hurt and the bites are itching what could be better than chilling out on the fishing deck at Coconuts with a cool beer listening to some zydeco and watching the pelicans, the magnificent frigate birds, the little terns wheeling overhead. We did all that and we will do it all again soon I am sure…and we saw dolphins too.
More about Cedar Key from their website here 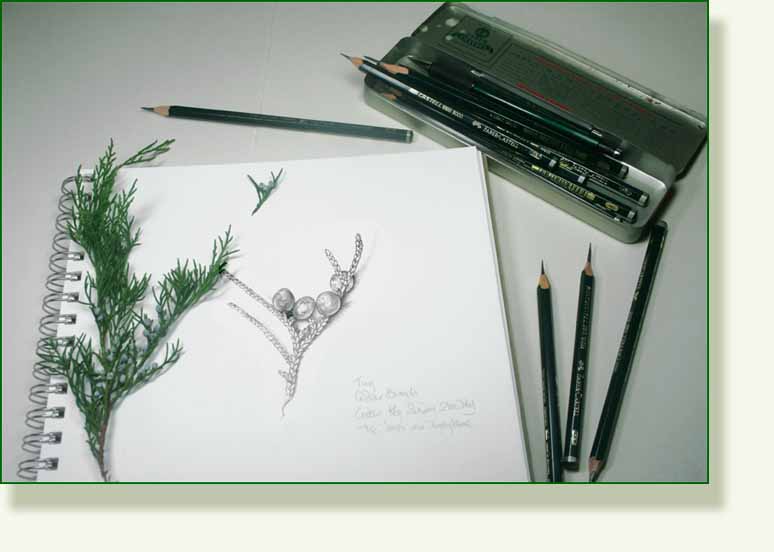 I did a quick drawing of a tiny piece of the cedar and thought it would be appropriate to add a photo of the pencils, the drawing and the model. The sprig is tiny and the drawing is enlarged x 3. 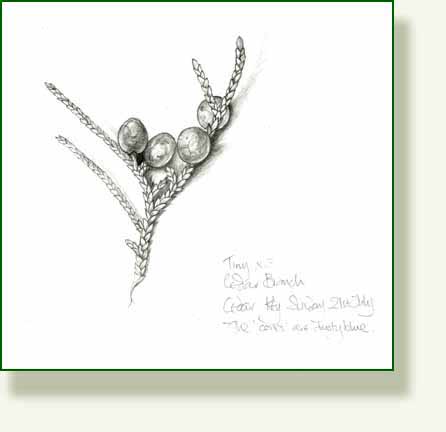