Having drawn the cone and spent hours trying to find the identity of the little yellow “flowers” on the needles (still no result), I decided to stay with the bald cypress and tackle a leaf. I will probably never do one again unless I am paid an inordinate amount of money. I prefer bigger simple leaves and I am afraid to say that by needle number 30 I was just bored.(there are a lot more)…perhaps bigger…perhaps in acrylics or gouache or even oils …perhaps just leave these to other more patient people.

I also started reading more about the fate of the little Parakeet, and of course, if Catesby had painted it, Audubon had too. While researching both I came across a fascinating article from the LA Times by Jonathan Rosen, February 24, 2008 entitled “What a Little Bird told us” 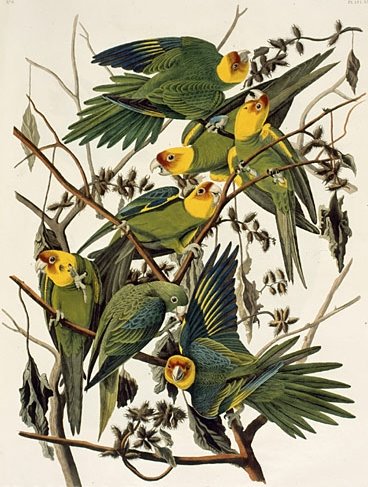 “They were large, colorful, noisy birds, found from the Ohio Valley to the Gulf of Mexico. John James Audubon noted the decline in the Carolina parakeet back in the mid-19th century, but the birds hung on in the wild until the turn of the 20th century. The last known Carolina parakeet died in the Cincinnati Zoo 90 years ago, on Feb. 21, 1918. His name was Incas. He had outlived Martha, the very last passenger pigeon — which also died in the Cincinnati Zoo — by four years. Once you get a celebrity cage and a human name, it is usually over for your species.”

The reason the birds were not saved was because of a woeful inability of the zoos to coordinate a breeding programme. They were persecuted to extinction through a combination of hunting, for their feathers to decorate ladies hats, a perception that they were harmful pests and the loss of habitat. But this very thoughtful article goes on to explore some difficult issues that we humans have to face with our primate killer natures and our conservationist desires and duties.
In 1898 Frank Chapman an important ornithologist and a great advocate of conservation went to find the parakeet and …
“unable to resist gathering rare specimens, shot them. Looking at the bodies laid out before him, he vowed to shoot no more of the birds. But later that day, he stumbled on another small cluster and killed them too. “Good resolutions,” he wrote, “like many other things, are much easier to plan than to practice.” “

Rosen also sites Audubon as an example of this complex “killing urge and the conserving urge“. That Audubon was a great lover of birds is without doubt, but he was also a great hunter and did of course kill the birds he painted so evocatively. There are mixed opinions about his methods and luckily, we admirers today can try to record their beauty harmlessly with cameras. I am going to read more about Audubon he was a fascinating man and there are some strange stories sourrounding his childhood.
The article concludes with a plea for conservation while trying to understand some of the contradictions we, as ‘hunters’ and self centred creatures, find in ourselves. I personally find killing anything for “sport” particularly abhorrent. To me, it speaks volumes about those who take part in it, but Rosen argues that
“…balance is the key — the watcher and the watched, the hunter and the conservationist, the talking parrot and the killer primate. All of us need to shoulder the responsibility of becoming “citizen scientists,” or at least “citizen naturalists.” We might as well begin by remembering Incas, last of his species, a wild animal with a human name who died in a zoo 90 years ago.
Follow this link to read the whole article it is definitely worth a 5 minute read.

“Citizen scientists” coined by the Audubon Society, are those many ordinary people whose enthusiasm for wildlife help our understanding of what is going on in the natural world, for example in 2007 more than 400,000 participants took part in the Big Garden Birdwatch organised by the RSPB in the UK. For one hour they counted the birds in their gardens and together they spotted 6 million birds across 236,000 gardens. I just don’t understand why some people feel the need to go and shoot them.
However with the deepening crisis in the economy and rising food prices there was report today that one of the major supermarkets in the UK are security tagging chickens, so perhaps the birds of the UK had better keep their heads down.
__________________________________________