It’s always nice to have someone in mind when painting things and this bee came about due to a note from my friend Esme who lives way up north on the Isle of Lewis. She wrote to me saying that they had seen quite a few of these big and beautiful endangered Bumble Bees while walking on the “machair”.

I have never seen the machair but judging by the photos, it is a sight to behold! Swathes of flowers starting with yellow hues in May,( is it like that now Esme?) changing to pinks and purples with both the month and the underlying soil composition. It must be very beautiful and has to join my long list of “things still to be seen”

What is the Machair?

‘Machair’ is a Gaelic word, usually taken to refer to an area of low-lying fertile land. Over the years it has come to be used by ecologists to refer to a specific coastal habitat, related to predominantly west-facing coastal areas backed by sand dunes, which is found only in some areas of northern and western Scotland and western Ireland.

“Most of the plants found on the machair are not rare (there are exceptions, such as orchids and lady’s tresses). It is the extraordinary abundance of flowering plants which makes it special. Lady’s bedstraw, bird’s foot trefoil, harebells, clover, tufted vetches, daisies and many others, benefiting from a traditional absence of chemical herbicides, form a carpet of flowers in spring and summer. The crofters who farm the machair have also traditionally not used pesticides, so that the land supports a strong and varied insect and invertebrate population. SNH identifies the two most notable species to be found here as the great yellow bumble bee, which is threatened by habitat loss, and the belted beauty moth.”

It’s another sobering example of how pesticides do so much harm to those creatures we really need. There is plenty of info about this very special habitat on the internet and more details about the flowers here from Virtualheb.co.uk.

For the painting I contacted the Bumble Bee Conservation trust for some more info re the bee and its flower preference. You can read much more about the BBCT’s work to protect it here and Bob Dawson, who is the conservation officer in charge of the project also has a blog here. Bob’s photo of the GYBB .. the colours are always brighter the younger they are .. this is, in Bob’s words “a fresh worker” 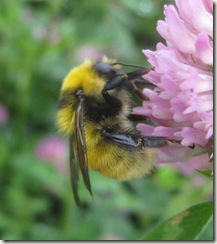 The Great Yellow Bee is just that, very big and very yellow! They have a body length of 12-21mm, and the yellow is a bright lemon rather than the softer orange yellow of other bumble bees. It is a relatively late bee, emerging in May, so takes advantage of the flowers of the machair and likes legumes, yellow rattle, marsh woundwort, knapweeds and thistles and many others and is not a particular specialist.

Its survival in the machair particularly is thought to be partly due to its relatively long tongue which enables it to feed on the long petaled flowers such as the vetches, knapweeds, and clover, many of which have disappeared from other UK habitats. USA readers!!!!

Don’t worry you too have a couple of very similar beautiful bees, the closely related Bombus borealis and Bombus appositus. Bombus borealis by Mardon Erbland from Bugguide 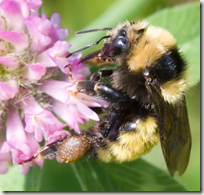 Black Knapweed Bob suggested that I draw Black Knapweed Centaurea nigra to accompany the bee, which is rather nice because although not quite the magnificent Scotch Thistle Onopordon acanthium, it is a relation and has a Scottish air about it but without the thorns. (I have lots of Scottish blood so a nice thistle makes me feel at home!) Photo by Anita Gould from Tree of Life Web Project here 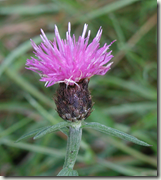 The knapweeds are a very interesting group of plants in general, with both dye and medicinal uses. The dreaded Spotted Knapweed Centaurea maculosa (branded noxious and invasive in the USA) was thought to have a curious defence mechanism, and that by producing a natural herbicide “catechin”, it could rid the surrounding ground of competing plants.
It’s called ‘plant-plant allelopathy’ and is quite a feat for a plant. It is a defense mechanism used by other plants but not entirely clear if it’s true of knapweed or not .. read more here. It’s fascinating 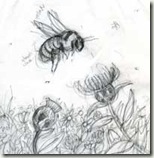 but after some thought I decided to tip the perspective a bit and have more of the worms eye view of this beautiful big bee, hovering over the black knapweed. 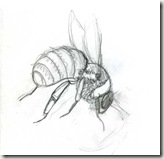 So here is the brilliant

Great Yellow Bumble Bee Bombus distinguendus .. (thank you Esme.) What a shame it would be if these magnificent creatures died out. 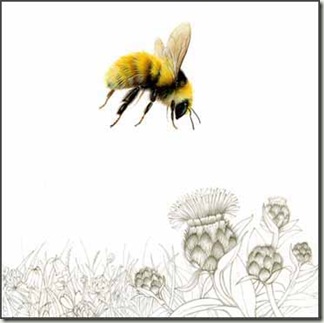