My replacement computer gave me endless excuses today for not painting, there were many things to readjust and re install, so I am not getting on very well with my fruit submission but I did get a bit of practice in. I also found it oddly hard to settle with this new computer next to me. It’s like a new friend who you feel you should to entertain .. not quite like an old friend who has achieved part-of-the-furniture status.

However I painted an enormous blackberry and little bit of the pomegranate, both from the supermarket. I had thought that blackberries might still be in season locally but a lady who sells honey at the market tells me that blackberries will be fruiting here in the spring. It seems strange to me as they are so much a part of autumn in the UK and associated with turning leaves and mists and mellow fruitfulness etc. They are part of Sunday afternoon outings with jars tied round with string and a first warm autumn jumper and probably wellington boots, coming home with stained fingers, scratched arms and the promise of delicious blackberry and apple pies, jams and bramble jellies. Sylvia Plath’s beautiful evocative poem must strike a chord with anyone who has ever been blackberrying.

Nobody in the lane, and nothing, nothing but blackberries,
Blackberries on either side, though on the right mainly,
A blackberry alley, going down in hooks, and a sea
Somewhere at the end of it, heaving. Blackberries
Big as the ball of my thumb, and dumb as eyes
Ebon in the hedges, fat
With blue-red juices. These they squander on my fingers.
I had not asked for such a blood sisterhood; they must love me.
They accommodate themselves to my milkbottle, flattening their sides.

Overhead go the choughs in black, cacophonous flocks —
Bits of burnt paper wheeling in a blown sky.
Theirs is the only voice, protesting, protesting.
I do not think the sea will appear at all.
The high, green meadows are glowing, as if lit from within.
I come to one bush of berries so ripe it is a bush of flies,
Hanging their bluegreen bellies and their wing panes in a Chinese screen.
The honey-feast of the berries has stunned them; they believe in heaven.
One more hook, and the berries and bushes end.

The only thing to come now is the sea.
From between two hills a sudden wind funnels at me,
Slapping its phantom laundry in my face.
These hills are too green and sweet to have tasted salt.
I follow the sheep path between them. A last hook brings me
To the hills’ northern face, and the face is orange rock
That looks out on nothing, nothing but a great space
Of white and pewter lights, and a din like silversmiths
Beating and beating at an intractable metal.

The poem was written in 1961 while she was living in Devon in the UK. It is a quintessentially British image, blackberries, the wheeling wind blown birds, drowsy fat late summer bluebottles and a sheep track winding to a crashing pewter sea.
I particularly like the flies believing in heaven but it is hard to read her poems without a sense of melancholy.

I was looking at the shine/sheen on the fruit. The problem with watercolour is to maintain the white areas you either have to carefully work around them or mask them out which can leave an unsympathetic hard edge.
I still can’t decide what to paint for the finished piece. 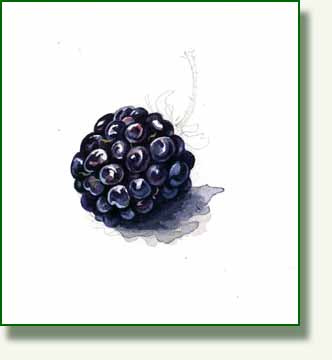 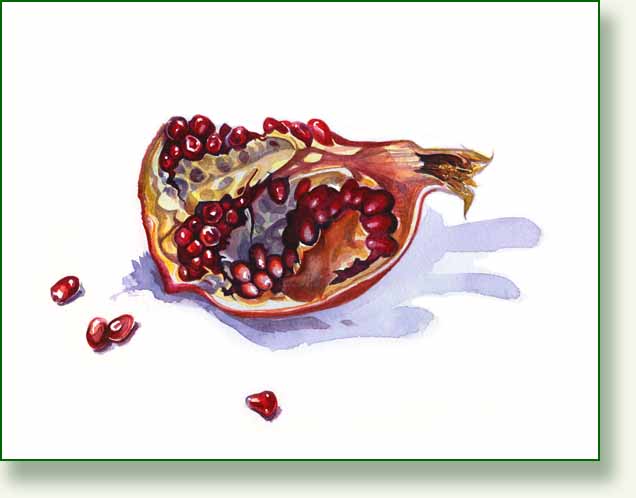