“Though sin and Satan have plunged mankind into an ocean of infirmities, yet the mercy of God, which is over all His workes, maketh grasse to growe upon the mountains and herbes for the use of men, and hath not only stamped upon them a distinct forme, but also given them particular signatures, whereby a man may read even in legible characters the use of them.”
William Coles
Art of Simpling (1656)

In medieval times the practice of medicine was a chaotic mixture of folklore, magic superstition, the remnants of classical texts and of course trial and error. You have then, to have some sympathy for the reasoning behind the advent of the Doctrine of Signatures. The Church constantly needing to assert its authority and combat pagan practices taught that everything on earth was put there for man’s use by God and each was therefore marked with a ‘sign’ which could be read and interpreted and used for man’s benefit.

Plants had long been used for cures of course, and sometimes based on similar notions of colour and appearance being linking to remedy, but to make for a more systematic Christian approach it was propounded that the key to the medicinal use of plants had been revealed by God in their shape and colour. Fertile imagination rather than careful experimentation was employed to link similarities between bodily parts, plants and cures.

The artist Della Porta, a believer in Signatures, published several examples in his Phytognomonica in 1591. In this case, the aconite , whose roots were thought to resemble scorpions, was used to heal the sting.
Even now some strange and completely erroneous attributes are given to certain herbal remedies based on some of these old ideas. Eye bright for example is still used today for eye complaints because the flower looks something like an eye???.. although there is no evidence that it has any real benefit.
In February 1864 Charles Dickens in his “All the year round, A Weekly Journal” comments on of Plant Signatures that “Not only the passions and superstitions but the pious delusions and migrations of our forefather’s are to be found recorded in the popular names of plants”

Some examples:
Lung wort, due to the spots on its leaves was related to pulmonary complaints. Plants with yellow flowers or roots, such as Goldenrod were believed to cure conditions of jaundice by the signature of colour. Celandine became known as pilewort because of its knobbly roots system.
Iris petals were commonly used as a poultice for bruising because the colour of the petals resemble the bruise they were to alleviate and walnuts were used for mental complaints because of the resemblance to the brain and so on and so on…
The most well know is probably the mandrake root wreathed in magic and superstition because the root resembles (to some extent) an entire human body. A typical root is branched into what that could be interpreted as arms or legs, and it may even have lumps and bumps that can be interpreted as a head or a penis so it was regarded as a potent cure-all for many human ailments. 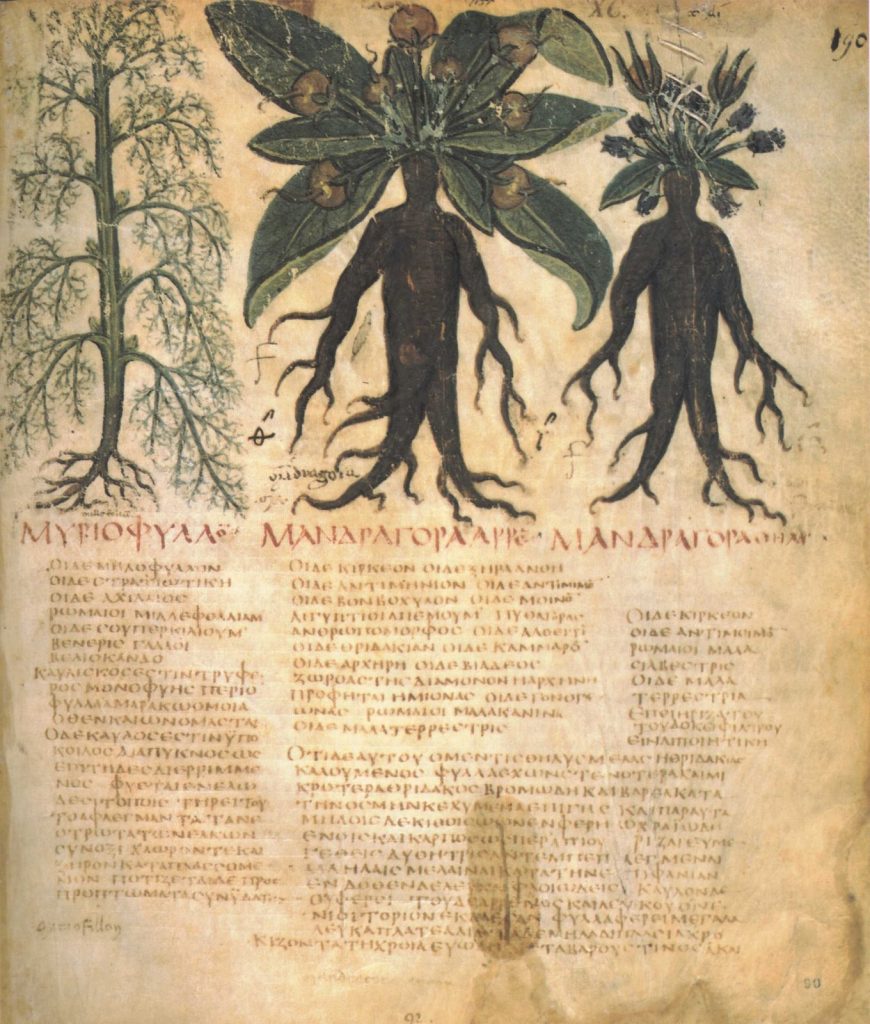 These theories were given credence and reinforced in writings of several high profile medical practitioners in the 16th and 17th centuries, Theophrastus Bombast von Hohenheim (1493–1541), (better known as Paracelsus), Jacob Boehme, in his book “Signatura Rerum; The Signature of all Things” 1612 and the herbalist William Cole in his “Art of Simpling”.
Cole advocates the use of distilled water of hawthorn for thorn splinters and puncture wounds. “It is found by good experience, that if cloathes and spunges be wet in the said water and applied to any place where into thornes, splinters etc. have entered and be there abiding, it will notably draw forth, so that the thorn gives a medicine for its own prickling.”

I am sure many of these associations were harmless or, as with many herbal remedies even accidently beneficial and if the power of suggestion worked to cure people, all well and good, but the danger of preparing a medicine derived from a plant that may bear some similarity to the part of the body to be treated is only too apparent in the use of Birthwort on pregnant women.
Because of its strange appearance members of the aristolochia family were thought to resemble the birth canal and so preparations were made to assist the already hazardous business of childbirth with some terrible results. 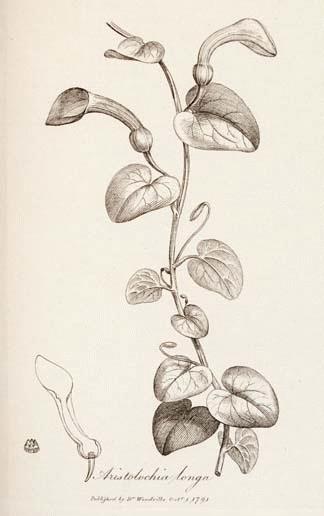 John Gerard in The Herbal (1633) wrote, “Birthwoort is…good for women newly brought abed, or delivered with childe. It expelleth whatever is left after the childe is delivered, also dead children.”

Midwives used this plant to aid in the expulsion of the placenta and ‘help’ the mother recover from childbirth. Unfortunately birthworts are highly toxic containing aristolochic acid, which causes severe vomiting, cramps, and muscle spasms. It is now a well know nephrotoxin, causing sever kidney damage, cancers and death, so this herb administered with the very best of intentions was more likely aborting babies and killing the mothers than helping in any way at all.
As late as the 1800s, the old idea held and women continued to receive this ‘medication’. William Cook in The Physiomedical Dispensatory (1869) wrote of the birthwort, “The cold infusion will usually act with vigor upon the kidneys….But it very especially influences the uterus.”

This is grim stuff and even when it began to dawn on people that the cure was actually killing its patient, to question the benefits of these God given qualities was unthinkable. However, like Dickens before, a Mr. A. B. Arnold writing in the report from the Medical and Chirurgical Faculty of the State of Maryland in 1844 is somewhat scathing about clinging onto traditional beliefs in the face of evidence and scientific study.
“ To those who objected that experience had proven these plants and animals not to have the virtues attributed to them, the advocates of the Doctrine of Signatures replied that to deny it was to call God a liar—a mode of argument not yet entirely given up by those who would have us read the book of nature through the spectacles of some preconception rather than by patient unbiased and reverential observations and experiment.”
It worries me that there are still many internet sites and crackpot practitioners who advocate the use of some of these theories.
I am all for natural remedies but based on some of those ” reverential observations and experiment ” please.
But I had to laugh when I saw this on a site promoting the multi million pound Bach flower remedy nonsense.

“Among other uses, Banana flower essence helps men to be more comfortable with their maleness.”What exactly do you do with it I wonder?

After yesterdays funny and rascally squirrels I need to turn my attention to something that has been lying dormant in the fridge for a few days now, isolated in the bottom drawer and out of harms way. Something that definitely doesn’t score so highly on the cute and cuddly scale. I am not going to write too much about this plant today as I may make some more studies, if not of this one, then of another variety. Suffice it to say the drawing is of an almost cute, baby monster which is destined to grow into something almost unspeakably fascinatingly, horrible or perhaps beautiful, it all depends on your personal definition of beauty.
When I first saw one of these at Leu, a variety in fact which has an even larger, floppier flower part, I thought a terrible incident of disemboweling had taken place, some bird of prey perhaps had impaled the intestines of something very big on the fence, leaving them trailing down the trellis half hidden in the leaves of a vine. But ..phew …it was only an aristolochia.

You know how I like the odd and quirky things in life. I find huge fascination in the many strange and wonderful aspects of plant life, but while I am in awe of this creature, I am really struggling to like this or for that matter, several other members of the bizarre Aristolochia family. If they or one of their relations moved in next door you would be seriously worried.
This innocent baby I have drawn is a young Aristolochia grandiflora and will become one of these….. 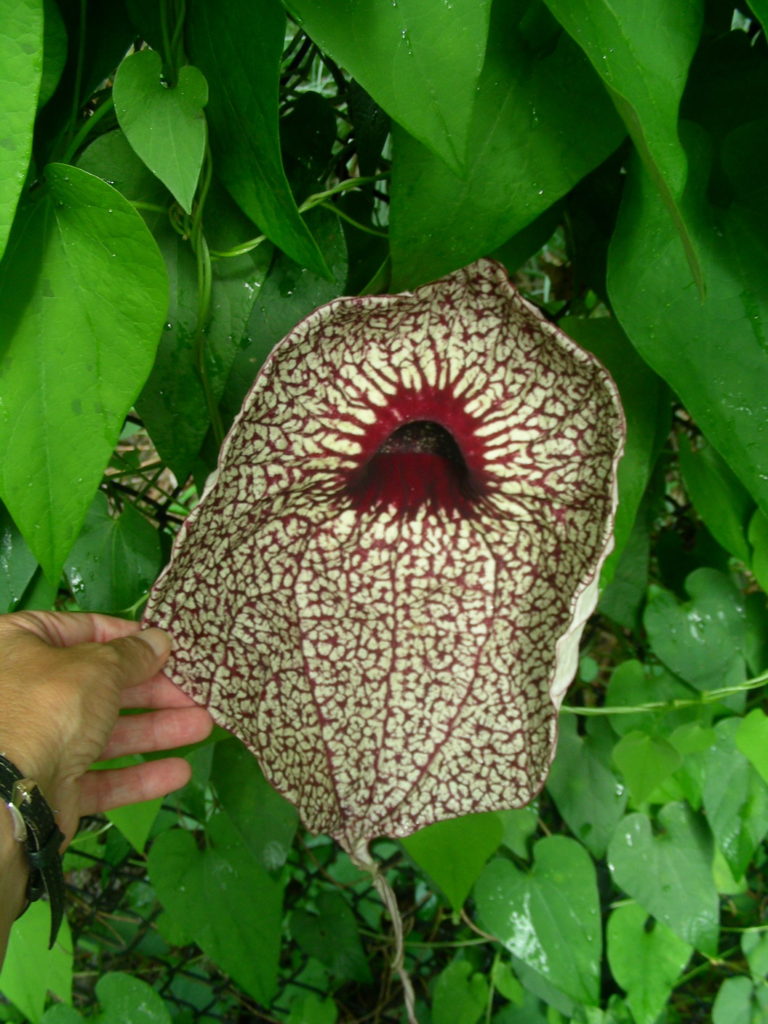 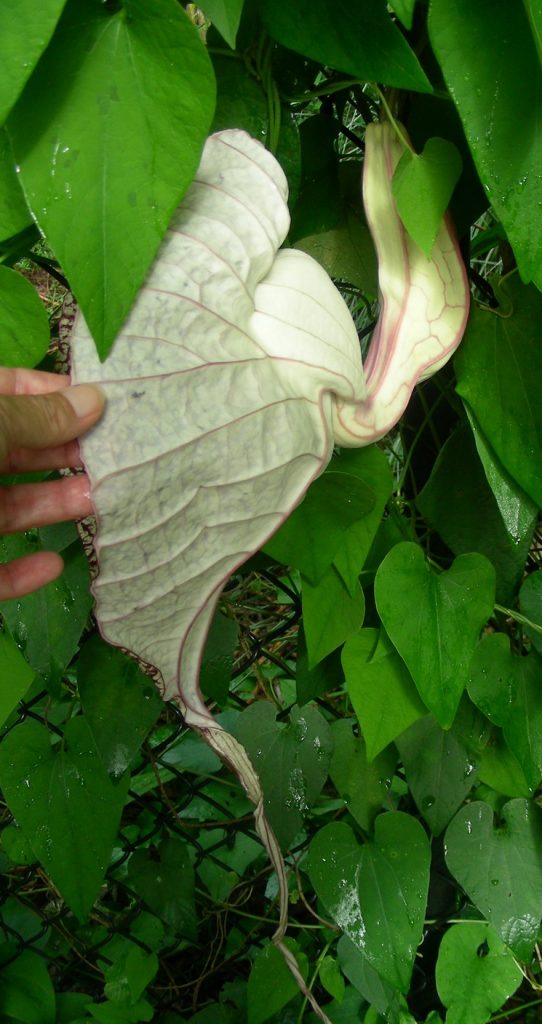 The Aristolochia grandiflora – Pelican flower, Dutchman’s pipe vine, birthwort or in an attempt to try and prettify it “calico flower” The tiny one I drew was just over 1 inch in length. The one immediately above, from the top of the “pipe” to the bottom of its twisty snaky tail, is 21 inches and not yet fully grown.

Opinion on the gardening sites is mostly favourable, some regard it as an excellent conversation piece for the garden. Personally I can think of ten million more pleasant things to talk about than a plant that looks like some gruesome botanical Frankenstein’s monster, fashioned by nature to mimic intimate internal human organs. It conjures up unspeakable adjectives, ‘flaccid’, ‘visceral’, ‘intestinal’, and nouns like ‘orifice’ and ‘entrails’. It feels strange too, the “pipe” parts are very rigid, reinforced by these raised veins and the patterned flower parts feel much softer, yes, like skin. The colouring is livid in parts and fleshy pinky, creamy white in others again with those raised dark red veins protruding …and is that greeny tint just a hint of putrefaction? If this thing suddenly started to pulse you wouldn’t be surprised. At least Mother Nature spared it from being either sticky or slimy .

There is no getting away from it, this plant is just fleshy and to call it a calico plant is, I think, somewhat euphemistic. Like the dreadful smelling Carrion Cactus (which I wrote about before here ) the “petal ” pattern has more of a similarity to a nice piece of marbled liver or meat rather than a cheery piece of cotton dress fabric. This flower also has a strong unpleasant smell which attracts insects who are lured down these sinister looking tubes to the inner part of the perianth (a fused calyx and corolla) which is covered with hairs, acting as a fly-trap. Mercifully this plant does not ingest its prey as the hairs in fact wither, releasing the pollen covered flies to go about their pollination duty much to their great relief I would imagine.
The names, pipe vine and Dutchman’s pipe, no doubt another attempt to ameliorate the instinctive feeling of revulsion to this plant’s appearance, are of course an allusion to those quaint old-fashioned meerschaum pipes.

But it is with the “Birthwort” name, that this plant and I really part company and we are back to the terrifying Doctrine of Signatures.. more of this tomorrow and it’s not for the pregnant or fainthearted. 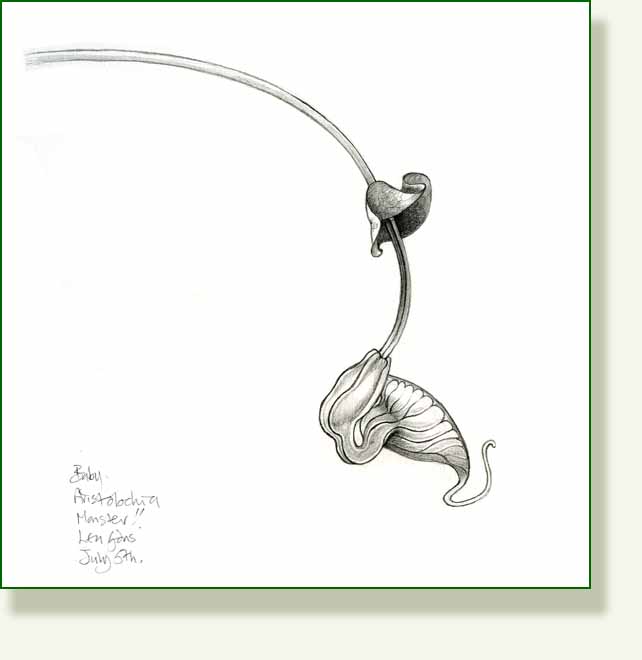