Today I needed to clarify, just for myself, exactly what a “fruit” really is. I thought the answer would be slightly more complicated, but a fruit is simply the ripened seed-bearing part of a plant. One definition said “If it’s got seeds ..it’s a fruit”
The confusion between fruit and vegetables only really arises in the grocery store or maybe between the main course and the pudding.
For example cucumbers and green beans are really fruit, whereas rhubarb is a vegetable. Vegetables tend to be the edible, stems, leaves, and roots of the plant.

Today Chris sent me this link about a wonderful exhibition at the San Francisco Museum of Modern Art ” Brought to Light” about the extraordinary Microphotography in the 19th Century. 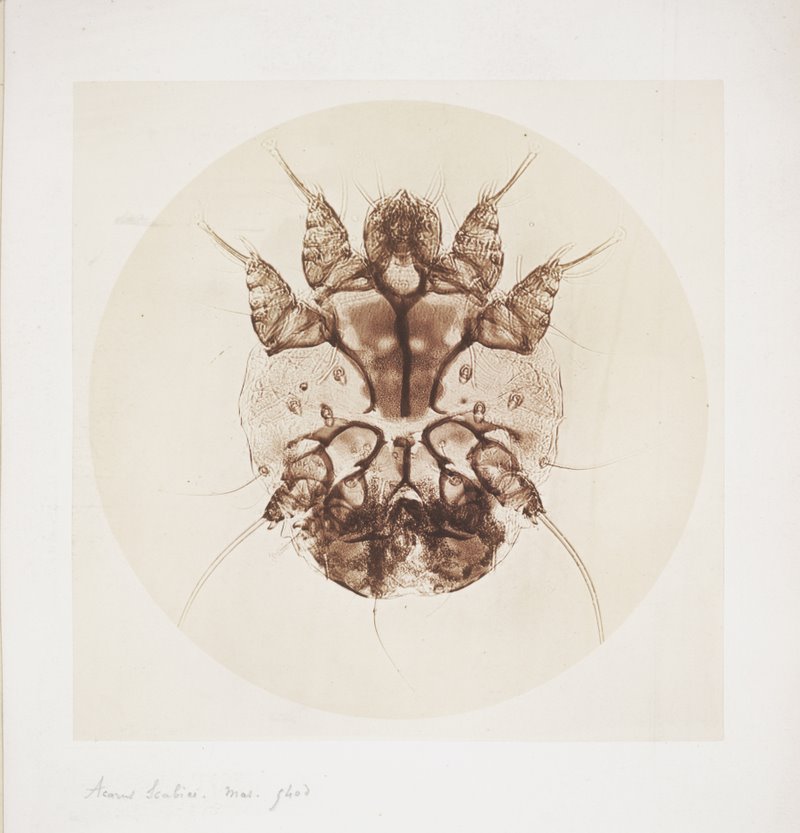 The whole article is fascinating and I would love to see the exhibition. It did of course herald the decline of the scientific illustrator.. well almost. But the article explains where photography and illustration differed.
I quote from Wired magazine here

“The idea of representing a specific living thing instead of a generalized abstraction of an organism forced scientists to let go of long-held notions about their discipline.
“Prior to the 19th century, the scientific illustrations tend to represent a type, an ideal. So if you were going to do a picture of a flower, for example, the illustrator would look at 20 flowers and then take the common features and make an ideal flower,” said Keller. “So, if that particular one happens to have a defective petal or something peculiar to it, you never really know:
Does the photograph substitute then for that type of flower in general, or does it only represent that one specimen?”
While it may have posed a challenge for scientists of the 19th century, it’s the unique nature of each photograph taken during this early period that wows us, even now. “

I have to admit it’s very hard sometimes to identify plants from photographs and a good “averaged-out” illustration is often better. But it’s those odd irregularities of each individual plant leaf and flower that I personally like so much and will continue to keep painting. It’s that very “averaging- out” that I dislike about much botanical illustration although I understand the necessity for it. I am glad not to be a scientific illustrator and have to reduce things to an the anodyne. Vive la differance.

It is very interesting to compare these photographs with the wonderful illustrations of Robert Hooke’s “Micrographia”, published in 1665 based on Hooke’s own drawings of natural phenomena seen under a microscope.
I wrote a little about the extraordinarily talented Mr Hooke here.

The flea was obviously much on the minds of people then, being, I imagine a more constant daily companion in the lives of 17th and 19th century man than it is, thankfully, today .
Compare then Hooke’s monstrous flea of 1665….. 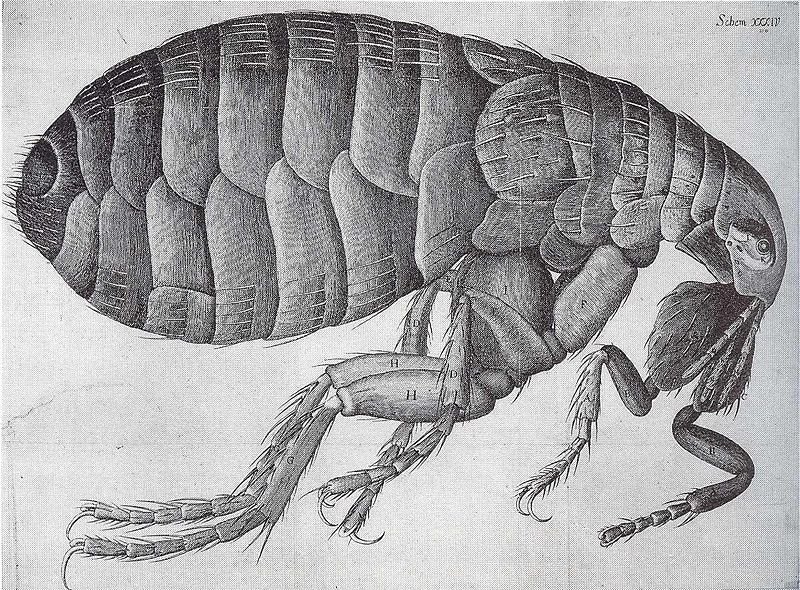 with, 200 years later, Arthur E. Durham’s Photomicrograph of a flea, 1863 or 1864, from the ” Brought to Light” exhibition. See the museum website here for more details and more revealing photographs 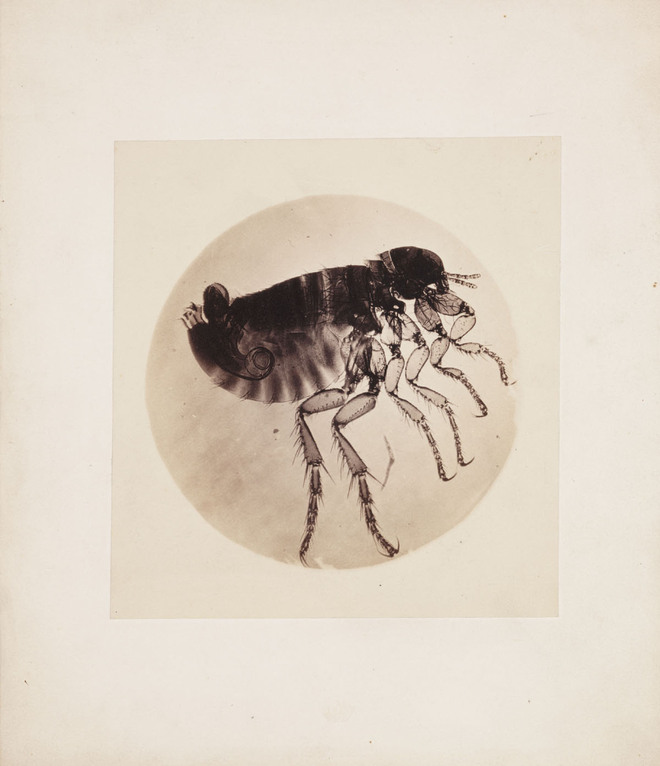 Are you itchy yet?

But my odd irregularity today is the fruit of the beautiful Batleaved Passion Flower. I have another, regular, grocery shop passion fruit here to draw but I like this little vine so much I decided to paint these first. I drew the leaf before here back in June. I had forgotten how beautiful they are. The fruit are tiny and turn from green with pale white spots to blue black. I do have a riper black one here but not enough time to draw it today.
________________________________________ 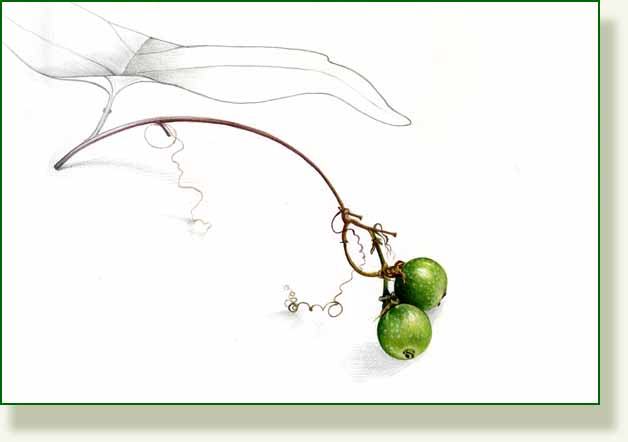 Today is the first day of summer in Orlando. Half way through the year, the longest day. I am thinking about how long the days will be in the UK this week. Light at 4.33am and not dark until 16 hours and 38 minutes later. I love the light, here we have three hours less, with dawn at 6.28 am.

Today I also spent too long at Leu and not enough time at the drawing board but I did find my bat leaved passionflower again, Passiflora coriacea. As you can see it is extraordinary, it is leaf shaped but sideways on. It is also slightly ironic, on the lightest day, to talk about creatures of the night but this is an excellent opportunity to introduce not only the bat leaved passionflower but also the delightful nectar feeding bats who are instrumental in the pollination of many flowers, including some passionflowers.
How you feel about bats is up to you but I personally like them very much. They are the only flying mammal, that in itself is amazing.
Bats, apart from doing the very good deed of hoovering up mosquitoes are important pollinators of many plants, amongst which are bananas and quite a few passionflowers. Bat pollinated passionflowers all have flowers which hang down, open late in the afternoon and have anthers which are angled in such a way as to brush the top of the head of a visiting bat with pollen. The bats need to visit the flowers often as their metabolism uses up energy very fast and in response the flowers make sure the nectaries are topped up regularly. 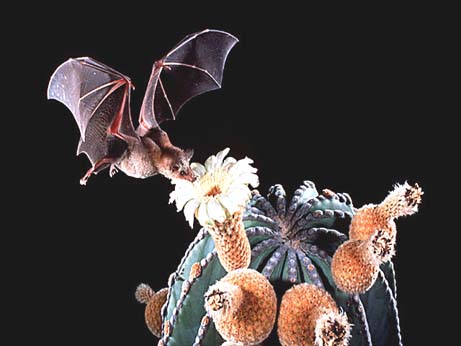 Here is a beautiful photograph of a nectar feeding bat from a learned article from the University of Arizona here about the importance of pollinators whose conclusion is that:
‘Migratory nectar-feeding bats, hummingbirds and resident bee populations are demonstrably at risk due to burgeoning human populations and changing landuse patterns ‘

So spare a kind thought for these funny little creatures, join a bat conservation group or just lean more about them. There is a good site here Bat Conservation International. and to learn more about passionflowers and bats there is an excellent site here at http://www.passionflow.co.uk/ 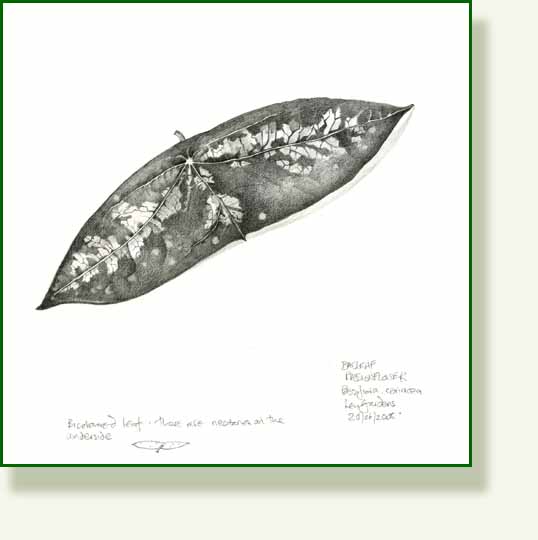