Sounding more like a character from a Sheridan Restoration Comedy this little dandy of a basil plant is one of the fancy herbs that you can now buy, and comes in my “eat your models” category of plants, so, as well as drawing it I will be adding it to my sporadic cooking activitities.
Basil Ocimum basilicum L. is one of the staple Mediterranean herbs and brings joy to tomatoes and cheese..I can’t think of anything nicer than a generous plate of fresh tomatoes and mozzarella with basil and olive oil.

The derivation of the word “basil” seems unclear but is possibly from the Greek basileus meaning “king”. Some say it has a connection with the wonderful legendary basilisk, against which the herb is, supposedly, a protection and because of this basil was also thought to have medicinal properties when applied to the bites or stings of animals.
The basilisk or cockatrice whose piercing glance, terrifying bite or foetid breath would be fatal, could be kept at bay by eating basil or drinking a suitably strong libation. 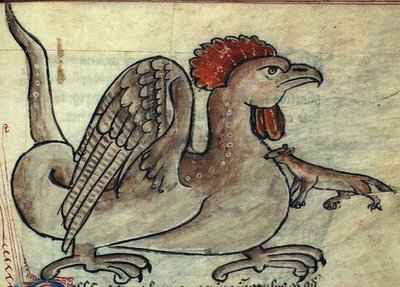 Whatever its origin, it’s a lovely excuse to include an image of the beast and a little bit of Pliny’s description.

“he killeth all trees and shrubs not only that he toucheth, but that he doth breath upon also: as for grasse and hearbs, those hee sindgeth and burneth up, yea and breaketh stones in sunder: so venimous and deadly is he. It is received for a truth, that one of them upon a time was killed with a launce by an horseman from his horseback, but the poison was so strong that went from his bodie along the staffe, as it killed both horse and man: and yet a sillie weazle hath a deadly power to kill this monstrous serpent.”

Superstition about the basilisk in medieval times was such that travellers would carry a weasel or a cockerel ( an alternative supposed vanquisher of basilisks) as protection.
Another curiously connected legend says that scorpions can be ‘acquired’ from basil plants, so should you wish to add a scorpion to the household pets place a few basil leaves under a flowerpot and after a while you will find a scorpion has taken up residence there.

I am hoping its efficacy in alleviating stings will work some magic on my mosquito bites and I will be putting lots in my pockets to bring good fortune… meanwhile I have to draw it.
It will be one leaf that I will paint for the next submission for the course and is very difficult. The surface of the leaf is…as it says, ” ruffled” or in not so poetic terms, slightly blistered, which is a challenge to draw never mind paint. 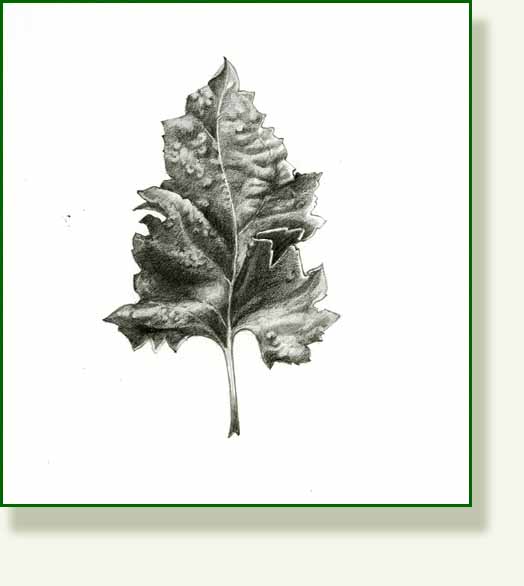