Ant has been very busy today, running about the drawing board and up and down the two desk lamps and while looking through the Myakka photographs yesterday I was reminded that I have now discovered his identity. Pinned to the canopy walkway tower at Myakka are information boards about the wildlife including this.. 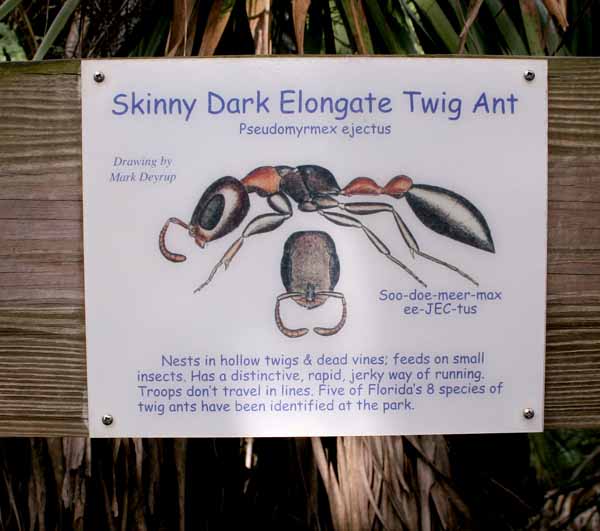 I recognised my little drawing companion at once who, it seems, rejoices in a name that is several times longer than himself. He is definitely one of the Skinny Dark Elongate Twig Ants, the Pseudomyrmex.
He might be P. ferruginea because they are some of the ants who live in the Bull’s Horn Acacia and I am now even more sure that he arrived with the Bull’s Horn Acacia thorns. He could be P. gracilis or even P.mexicanus Roger :)… The descriptions fit in every way, particularly the colouring. Reading more about these delicate little arboreal ants it seems they are often solitary and live on tiny insects and ( ignorance was bliss) they have quite a bite, but only when provoked or defending their tree. They inhabit twigs and thorns and hollow stems and make only small colonies.

I don’t yet have a good photo of my ant but this is P. gracilis from the Louisiana State University Agricultural Center here

The role of caretaker ants for various trees is fascinating. I wrote about this before here in relation to the Bull’s Horn Acacia and the wonderful Thomas Belt who observed the ant’s behaviour in 1868. They will attack any threat to their chosen tree ferociously and even clear the ground of vegetation to allow their favourite tree the best possible growing conditions, in return they get food and lodgings.
Perhaps Ant’s loyalties have now been transferred to me, although he doesn’t seem to be doing a very good job of clearing the room of mosquitoes. He seems remarkably fit, healthy and happy with lots of small insects to feed on and the occasion drop of honey and an endless supply of new and exciting bits of twig, flowers, fruit and seedpods to play with. However I feel I should to take him back to Leu to his tree as he evaded the earlier repatriation. But there are moral complications. What if he would now be regarded as an outsider and attacked and killed.. How would I feel? But does he enjoy his solitary existence? Maybe are there really two of them and they are perfectly happy here. I shall have to attend to this dilemma soon.

The drawing is of one of the major thorns of the acacia in which Ant and his friends and relations would keep house. The entrance to this particular thorny residence is through the black hole in the part which looks like a bird’s head. The thorns are all hollow and this one is big, some 4 inches across. It’s shape is fabulous, looking like some modernist piece of sculpture, nature’s architecture at its Frank Gehry best and very fitting for my little skinny ant friend.
Oh, that I could have such an inspiring home. 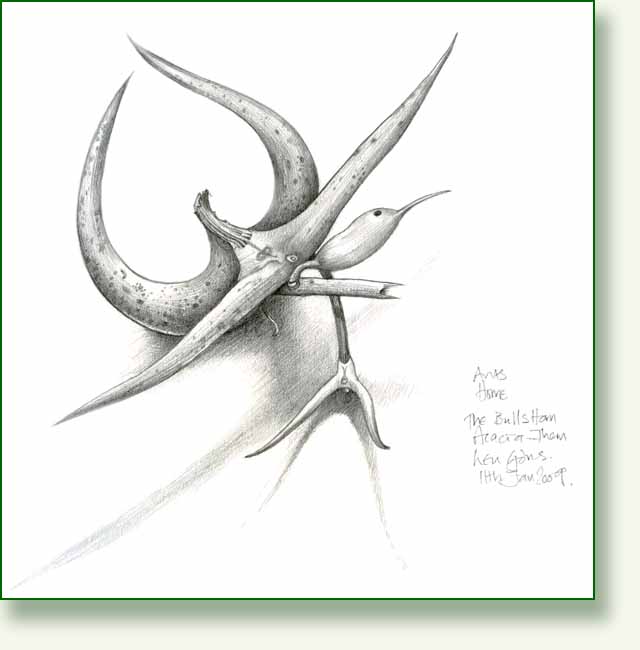 Some time ago I wrote about repatriating some ants to Leu gardens which, I know, had arrived here in the Bulls Horn Acacia thorns. (reason here) Since then, Pedro gave me another beautiful thorn with, of course, a couple more of the caretaker ants. These I have re-homed in remote parts of the apartment complex but I seem to be stuck with one that won’t leave. I have put it outside now many many times but the next day it is back, so I give in and now seem to have a pet. I am not particularly fond of ants but my Buddhist leanings stop me just squashing it. There only seems to be this one at the moment so for now we have a truce. If the extended family arrive for a prolonged stay I may have to reconsider my largess.
It is a slender delicate little thing, extremely adventurous and fearless and spends a large part of the day running around my drawing table. I felt sorry for it the other day and gave it some honey which it spent all day eating. I didn’t see it the next day so presumed it was sleeping off a massive honey hangover, but today it was back.. it’s name is…Ant. It will feature in a painting soon and it’s quite nice to have this diminutive little companion for a while. Painting is a solitary business.
It has been scampering about all day today and has been a welcome distraction from watching paint dry. However it’s day 6 and I hope only one more day to go. I think it would be wise to stop anyway and get on with something else. I have made some mistakes and some progress but I always say that if you are happy with just one square inch of a painting it has been worthwhile.
I plodded on with the leaves but by lunch time I just had to get rid of the masking fluid. This may be a mistake, but I was just fed up with seeing the blue stuff and its sticks to your hand too. 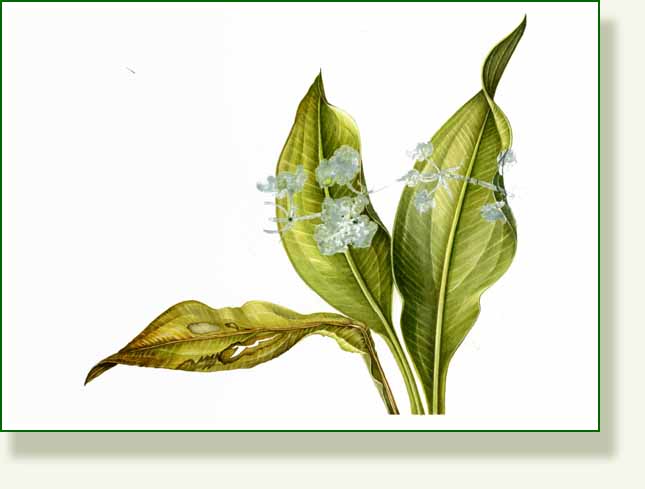 Accidents?.. well 4 so far, one aphid which fell off my model and left a green smeary mark and 3 colour spots, one where I had paint on my hand. another where I dropped the brush, and the inevitable mystery one. All are on the parts of the paper which have to stay white .. but hey!..there is no point in worrying.
After another trip to find another flower head I started the stem. The green seed heads are quite a different green from the leaves.. really bright emerald but for this painting and in view of the comment the colours of my last submission I am keeping them subdued.
As I am writing this I have just noticed my other delightful studio companion, the house gecko. They are amazing aren’t they? Just like moving fridge magnets.. Hmmm …how compatible exactly are geckos and ants? 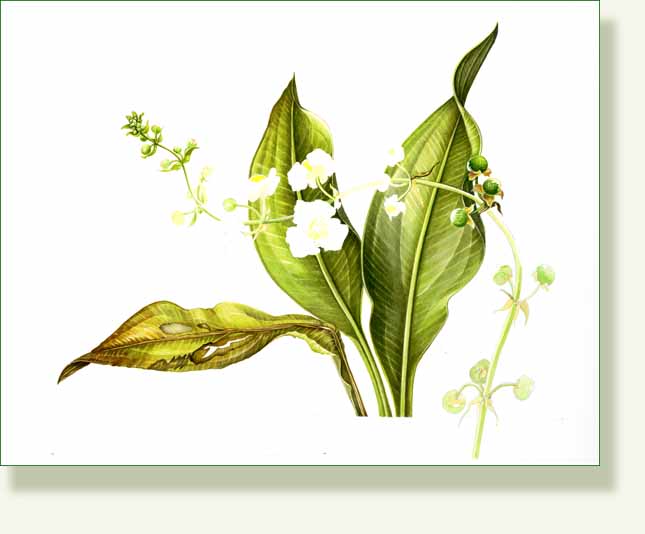 Today was my last brief trip to Leu Gardens for at least 3 weeks. I will miss my visits, both for the people and the plants. However I have a little thorny twig today from the Bull’s Horn Acacia tree, acacia sphaerocephala which looks nothing much on its own, but just a little research reveals one of those plants with an extraordinary relationship with insects. This time with ants.

While supervising a gold mine in Nicaragua in 1868, Thomas Belt, a British engineer and keen naturalist observed that a particular acacia tree seemed to be colonised with ants, so much so that if he touched the tree and disturbed their colony, the ants would race out and bite him ferociously. Simply put, Belt formed a theory that the plant and the ants seemed to rely on each other, forming a mutualistic relationship, which he published, to some scorn at the time, in 1874. Here is a section from his book “The Naturalist in Nicaragua” which is written in such a delightful way.

“The branches and trunk of the acacia are covered with strong curved spines, set in pairs, from which it receives the name of the bull’s-horn thorn, they having a very strong resemblance to the horns of that quadruped. These thorns are hollow, and are tenanted by ants, that make a small hole for their entrance and exit near one end of the thorn, and also burrow through the partition that separates the two horns; so that the one entrance serves for both. Here they rear their young, and in the wet season every one of the thorns is tenanted; and hundreds of ants are to be seen running about, especially over the young leaves.
If one of these be touched, or a branch shaken, the little ants (Pseudomyrmabicolor, Guer.) swarm out from the hollow thorns, and attack the aggressor with jaws and sting. They sting severely, raising a little white lump that does not disappear in less than twenty-four hours. These ants form a most efficient standing army for the plant, which prevents not only the mammals from browsing on the leaves, but delivers it from the attacks of a much more dangerous enemy–the leaf-cutting ants. For these services the ants are not only securely housed by the plant, but are provided with a bountiful supply of food and to secure their attendance at the right time and place, the food is so arranged and distributed as to effect that object with wonderful perfection.” 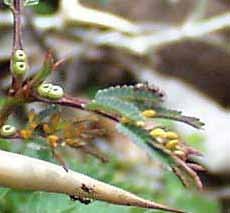 The strategically well laid on meals he speaks of are provided in the form of small nectaries at the base of the leaves which produce a sugary, and amino acid rich ant treat. They don’t have far to go, as the thorns and leaves are adjacent. There are also more “solid meals” for them in the form of small protein filled packets at the tips of the leaflets, which he describes as looking like “little pears”. In this photo above from Backyard Nature you can just see ants, cups of nectar and the yellow “pears”
“When the leaf first unfolds, the little pears are not quite ripe, and the ants are continually employed going from one to another, examining them.When an ant finds one sufficiently advanced, it bites the small point of attachment; then, bending down the fruit-like body, it breaks it off and bears it away in triumph to the nest. All the fruit-like bodies do not ripen at once, but successively, so that the ants are kept about the young leaf for some time after it unfolds. Thus the young leaf is always guarded by the ants; and no caterpillar or larger animal could attempt to injure them without being attacked by the little warriors. The fruit-like bodies are about one-twelfth of an inch long, and are about one-third of the size of the ants; so that an ant carrying one away is as heavily laden as a man bearing a large bunch of plantains. ……..These ants seem to lead the happiest of existences. Protected by their stings, they fear no foe. Habitations full of food are provided for them to commence housekeeping with, and cups of nectar and luscious fruits await them every day.”

Belt’s theories were questioned at the time and it wasn’t until the 1960’s that the relationship between the ants and the trees were proved by Daniel Janzen. Astonishingly, as well as being ferocious defenders of the tree, the ants keep the surroundings of the tree clear of other plants, even pruning branches of nearby trees which would overshadow the acacia and take its light.
Thomas Belt was one of those energetic and apparently indefatigable Victorians. A geologist and naturalist by inclination he seemed to be able to juggle both his “hobby” and his job of goldmining supervisor with ease. His work took him to Russia, Australia, Nicaragua, Siberia, Nova Scotia and Denver where he was able to make thorough and important observations of the natural world, as well as theorising about the glacial periods in England. .. It makes my 2 mile radius world of Winter Park seem very small.
For other interesting insect related story see previous posts. oak galls, cycads and fig 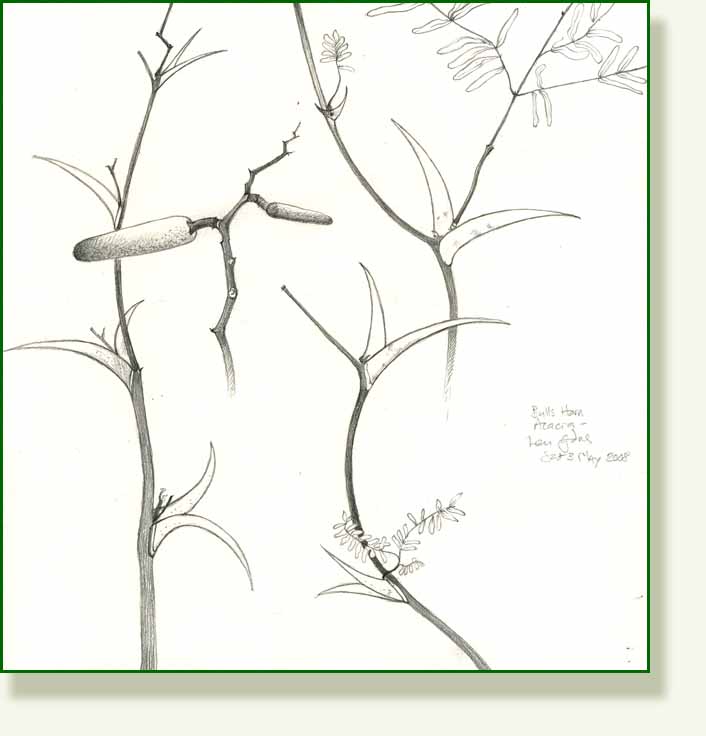