I have resisted the almost irresistible urge to continue “improving” K2. I have put it out of sight and returned to thinking about the Leu exhibition. I now have 4 weeks.. Hmm. I want to do some more work on the big leaf painting and have been thinking about adding a lizard.
So today I trawled through my lizard photos. There are many, mostly blurry brown shapes on leaves but some good enough to make some prelim sketches. This is one reasonable photo and it is the lizard’s favourite spot at Leu Gardens, posing on the plant labels. 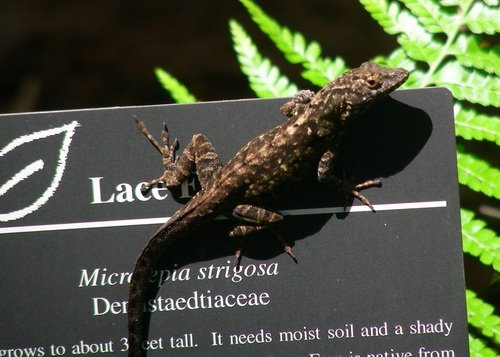 The lizards here are one of my constant joys. I love their attitude, their fearlessness and the mad communal dash they make across the pavement in front of you. What I can’t quite understand is why, when they are already safe in the grass on the road side of the pavement they rush across your path to the other side, instead of staying put…but they do. Cycling is sometimes like doing a lizard slalom course and sometimes they just stop in mid flight which is equally unnerving. By the pool they skitter around, constantly bobbing their heads up and down to check out what is occurring and challenging our presence. We have had to rescue the odd one or two from drowning. 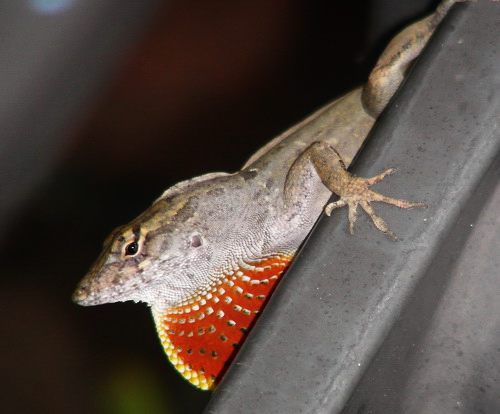 The ones I see most often, both here and at Leu, are the Brown Anoles, Anolis sagrei, who arrived in Florida in about 1880 from the Caribbean Islands and made themselves very much at home. A bit too much it seems as they have been busy displacing some of the natives. They are described as runners and jumpers and are easily identified by the dewlap of bright skin under their chins which they inflate and deflate in territorial and mating displays.
Todd Campbell’s web page The Brown Anole, from the Institute for Biological Invasions, “Invader of the Month”, tells us more.. here
“Less obvious to the casual observer is their expanded toe-pads which, like those of gecko lizards, help anoles cling to even the smoothest of surfaces, and the extent of which varies with their degree of arboreality.

Also from the site is this photo and accompanying quote about the lovely elegant green Anoles, Anolis carolinensis which have become less common here. I do see them occasionally but they are far outnumbered by the brown.
I do have a photo of a green Anole but couldn’t resist number 47 here. 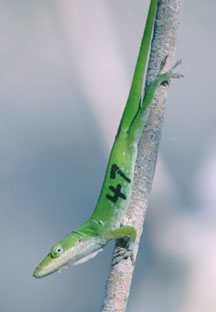 “They are of a most glorious green, and very tame.They resort to the walls of houses in the summer season,and stand gazing on a man, without any concern or fear.”- J. Lawson, A New Voyage to Carolina (1709)”

These beautiful and endearing lizards are native to the south east USA and have the ability to change colour from this brilliant green to darker and duller shades of brown. This colour change occurs for camouflage reasons or when unwell.
“Stress in an anole can be identified by several symptoms. These symptoms include a constant shade of brown and a persistent black semi-circle behind their eyes and chronic lethargy.”
Wiki ( here)
(Oh dear.. I think there may be more lizard ancestry in me than I care to contemplate)

Another really beautiful lizard I have seen (and for once took a reasonable photograph) is the Five-lined Skink, Eumeces fasciatus. That tail is the most gorgeous sky blue and indicates that this is a young lizard. 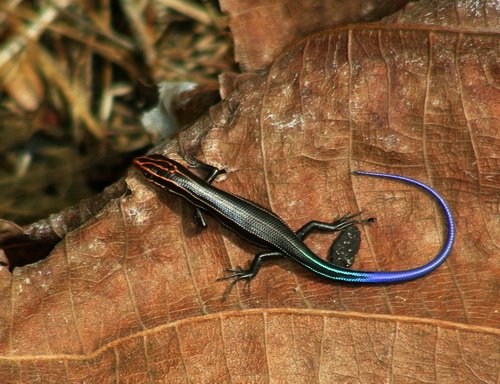 But why do they lose their tails? I see so many tail-less lizards, or lizards with little short, just regenerating tails. But then I have also seen some ferocious lizard brawls which, come the summer months, spill out onto the gentile suburban sidewalks of Winter Park regardless of passers by. It seems this has something to do with it and escaping from predators too.

Losing your tail is called “caudal autotomy”and is not something you would do lightly, not even as a lizard, as your tail is needed for balance and indicates your social status. But to escape being eaten, your tail is better than your life. There is a weak point in the tail bones which easily breaks, shedding the tail which, in a macabre way can go on twitching so diverting the predator. 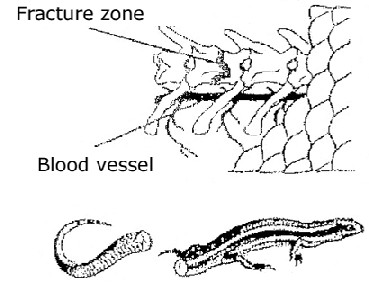 To prevent catastrophic bleeding, the blood vessels constrict and the trauma stimulates the cells of the spinal cartilage to regenerate, so that a new “fake” tail is grown but only as cartilage, not bone. This new tail will never be as colourful, strong or as long as the old one, social status no doubt plummeting from young and desirable, and to seasoned warrior, but it is better than nothing. 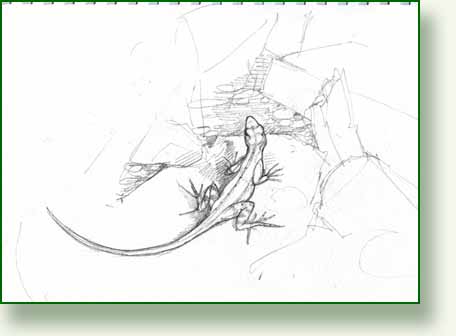 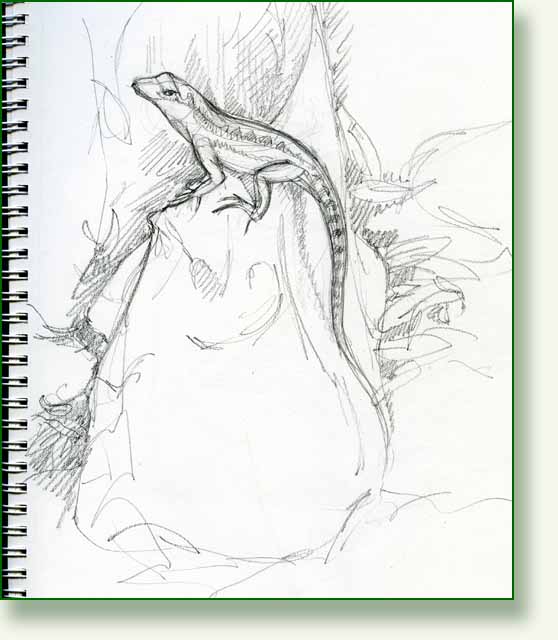 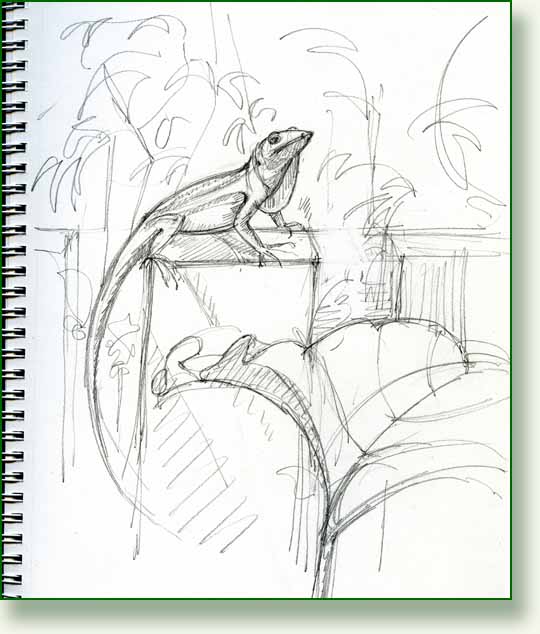