For this project I am putting together a set of bees which hopefully will show their diversity and beauty, so variety in colour and shape and pattern is important.
There are many different species from all around the world and as you would expect Australia has some unusual native bees.
This is the very beautiful Blue Banded Bee which has pale iridescent blue instead of yellow stripes and digs burrows in soft sandstone or clay for their nests.

This is another solitary bee from the same family as the Hairy Footed Flower Bee from the last post.

This website, www.aussiebee.com is a mine of information and is one of many which does its very best to encourage the public to understand and cherish their native bees, underlining their importance in pollination.

This is another bee which performs “Buzz Pollination” (see my buzz pollination post here) and is now being seriously considered as a pollinator for commercial crops of tomatoes, eggplants and kiwifruit, as well as native plants such as Hibbertia, Senna and Solanum.

Up until now, tomato growers in Australia have had to use electronic fertilization methods and steps were being taken to import some European Bumble bees to help with the task.
However the Blue Banded Bee has proved to be very capable and a breeding programme is now being developed.

Do watch this delightful short film from Aussiebee and see the males jostling for position on top of the twig, with a lot of cross leg waving. They will gather together here to rest..if they can agree.. 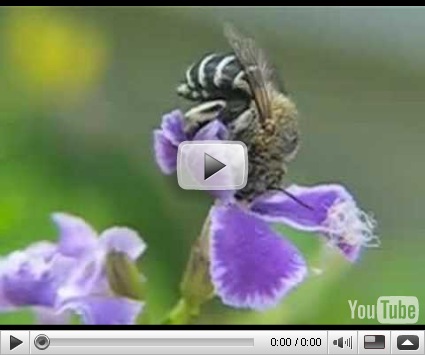 Where and how bees rest at night is a fascinating subject and for another post, but these bees will gather together clinging onto twigs with their jaws.
Here is a photo by Anna Tambour of a ” sleeping” blue banded bee from her post “The Sleeping Bees” which is lovely, as is her blog, Medlar Comfits here.
I particularly like this as it shows her finger nail and gives you an idea of the size of these beautiful bees.

She also includes this quote from another site. Yallaroo Wildlife

“Unfortunately many gardeners have been conditioned to reach for poisons as soon as they see something with six legs and wings.”

This bee had to show off its beautiful stripes. Also, its wings are much more transparent and lighter in colour than some others. 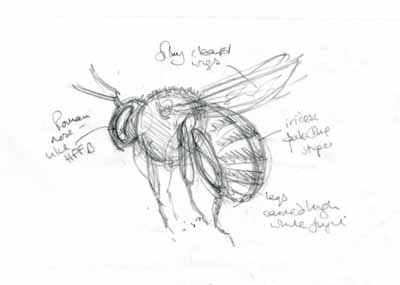