the turn of the year and the great conjunction

Really this is a day to record with a small drawing; not only is it the solstice, my very favourite winter day but also this day sees the wonderfully named Great Conjunction with Saturn and Jupiter

…in 1623, the solar system’s two giant planets, Jupiter and Saturn, traveled together across the sky. Jupiter caught up to and passed Saturn, in an astronomical event known as a “Great Conjunction.”

What makes this year’s spectacle so rare, then? It’s been nearly 400 years since the planets passed this close to each other in the sky, and nearly 800 years since the alignment of Saturn and Jupiter occurred at night, as it will for 2020, allowing nearly everyone around the world to witness this “great conjunction.”

I hope we will be able to catch a glimpse.

I do have a particular interest in what goes in on the skies; planets, moons, meteors and stars have all featured in the Dds. It is a source of constant wonder and awe to me. Add this event to the turn of the year and I can almost forget the grim situation here. 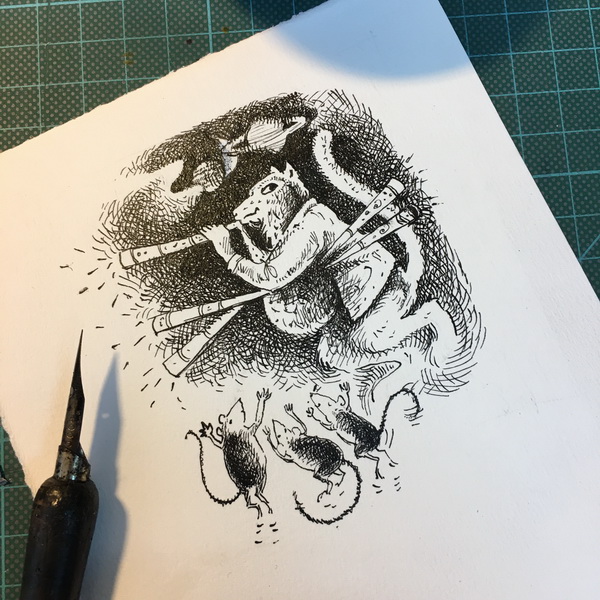 Todays little drawing is a nod to the event, to the joyful feeling of the beginning of The Return of the Light and the old Yule festivals. A bagpipe playing creature and some cheering mice, an almost quarter moon and Saturn and Jupiter. I am not entirely sure the mice should be so happy though.

I adapted it to make a quick lino cut this afternoon.

I am going to leave this year on the cheery mice note, looking forward to better things in 2021. 🙂 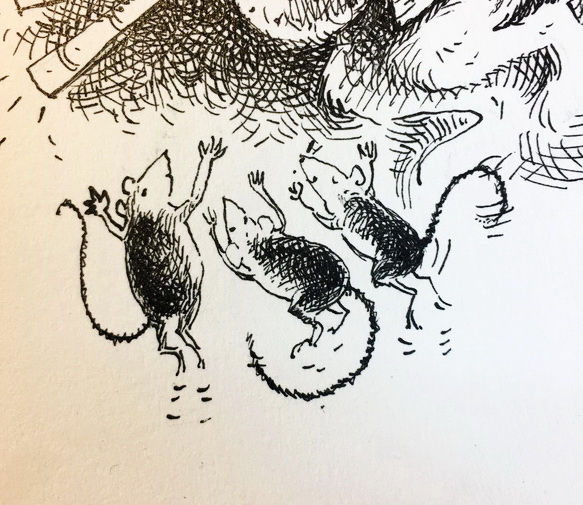