More Dailies, Toothache and the enduring dilemma of what to draw?

Another batch of the daily drawings. 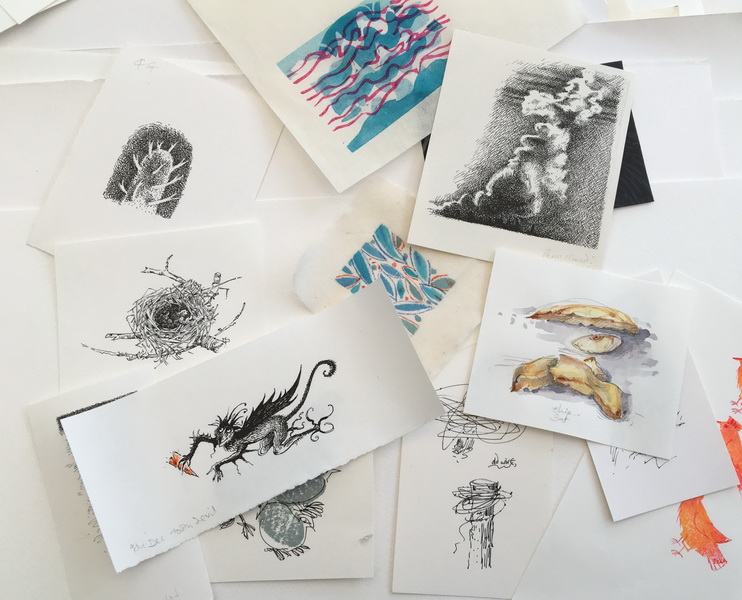 The most relevant one is this, a bit of a shaky one made on Wednesday to summon up the Demon of the Tooth. 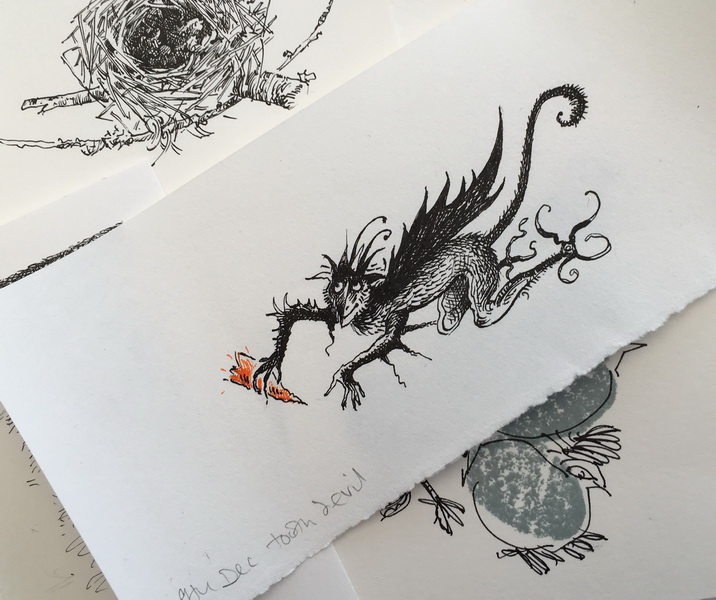 Who obligingly arrived to assist the very kind dentist relieve my skull splitting toothache, by carrying away the tooth. Another one down and not many to go now. Thank god.

Then a huge steam cloud on the horizon one frosty morning from a distant power station and chips from some delicious fish and chips. It was a noteworthy event as they were the first for 8 months. Small treats mean a lot right now. 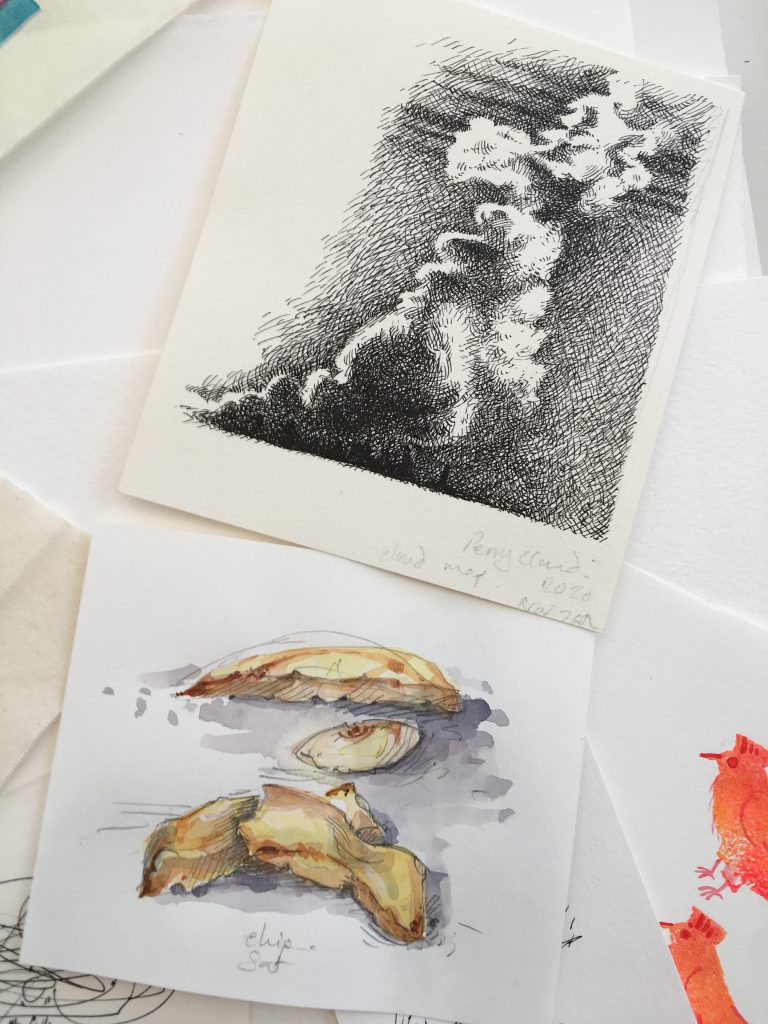 So it’s been a bit of a miserable week with agonising toothache, slippery icy roads and seemingly inccesant freezing rain which stopped the cycling. Not much progress on any front.
Then first day back to sketch in the woods on Thursday it rained, big heavy drops…… well it’s interesting? 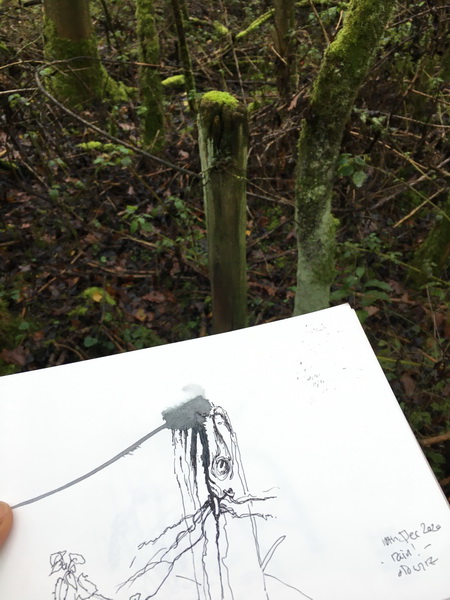 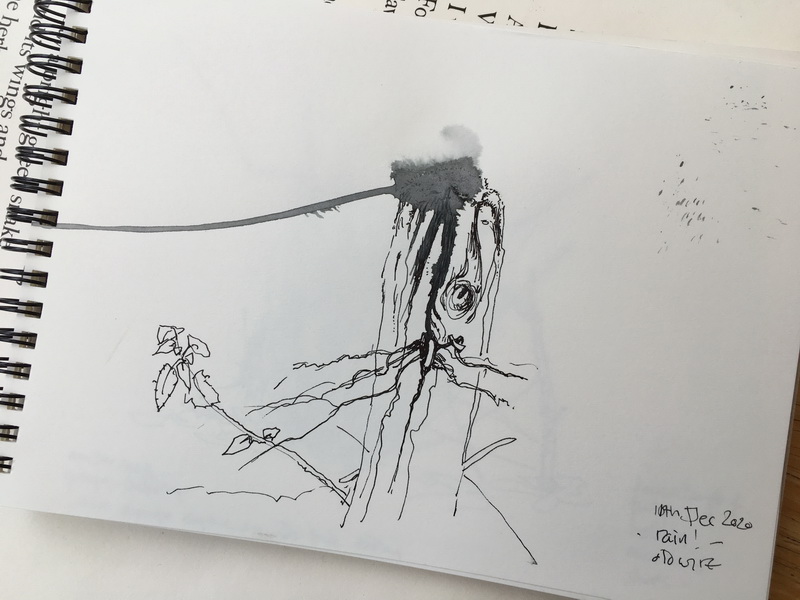 But I am keeping up with the daily drawings and starting to think about making a couple of the books.

What to draw?
The issue of “what to draw ” keeps coming up. It’s not that I don’t have ideas or subjects it’s more the question of what do I really want to draw.

Unfortunately when I was very young, to draw true-to-life was praised and so I tried hard to do that. I practised and practised until I was quite good. Then I went to college at a time when realistic work was very much in vogue and those skills enabled me to make a living as a commercial artist which I cannot complain about. But I’ve always had a nagging feeling that it wasn’t the work I should be doing. Not so much the style as the content. Printmaking has loosened me up somewhat but I’m still not quite where I want to be.

So I’m hoping that, given the opportunity to experiment a bit more with the daily drawing routine, a more personal body of work will begin to develop. Fewer leaves…but more what?
Doing a bit of displacement tidying-up the other day caused me to look back over some old notebooks. They are stuffed full of thumbnails and notes, glimpses of other ideas which never managed to fight their way to the front. Hopefully now they will be given a chance! 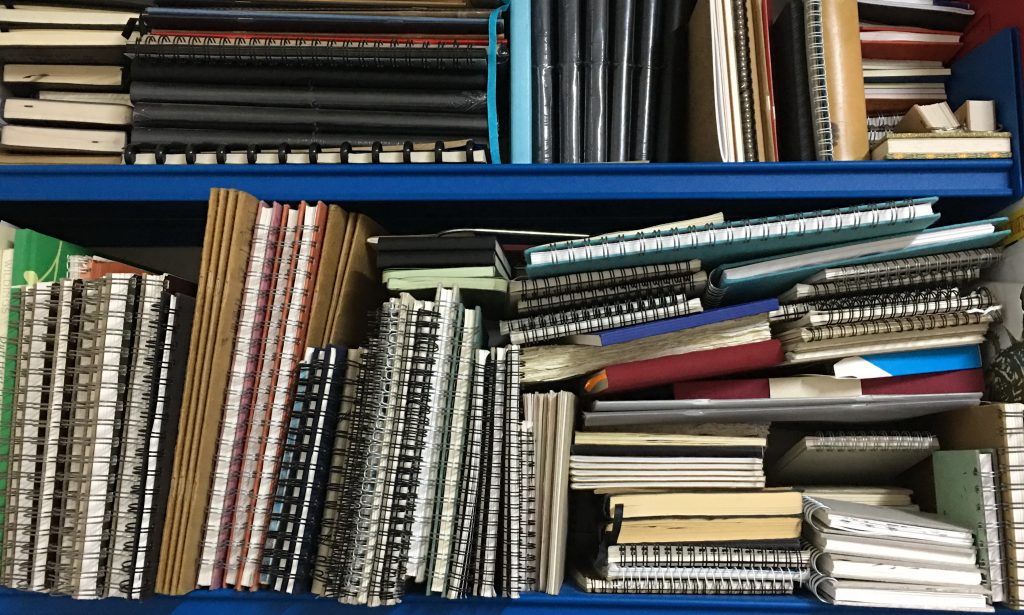 A few of the untidy full note/sketchbooks .. I am sorry not to be able to present ranks of matching moleskines but that’s just not the way I work. Anything to hand is just fine.

Who knows what will emerge. 🙂