The Start of the Bee Charm Booklet

In this lockdown I have decided to impose some deadlines on myself to keep me on track and away from the delights of the fridge. It’s not a very onerous task on the face of it, just two exhibit-able works per month. But that implies “finished” which is one of my problem areas.

Number one this month is the Bee Charm booklet:

Since January I have been re-exploring the wonderful Anglo Saxon Bee Charm “Wid Ymbe“.  I had first played with this lovely text back in my Masters Degree days. I made some prints and small dummy booklets but nothing was finalised then and it’s been one of those projects which has kept coming back into my mind.

The Bee Charm is one of the fabulous Anglo Saxon metrical charms which were, as Wiki rather nicely puts it:

“sets of instructions generally written to magically resolve a situation or disease. Usually, these charms involve some sort of physical action, including making a medical potion, repeating a certain set of words, or writing a specific set of words on an object.”

The charms it seems were mostly written in the margins of manuscripts.  They are varied and wonderful and seem to have remedies for many ills! There are charms to help you on your journey, to prevent theft of cattle, to help against sudden pains and most delightfully against “water elf disease” and elvish things in general.
There is so much to read about these charms and I have only skimmed the surface. I have also been wondering if I could successfully adapt one for the current problems.

This particular version of the bee charm was inserted into the margin of the “Old English Bede” manuscript 41, held at  Cambridge, Corpus Christi College, around the early eleventh century. See the image below where the white marker shows the start of the text.

You can see more of the manuscript here: https://parker.stanford.edu/parker/catalog/qd527zm3425

The Charm is to be said when the bees swarm. This is an approximate translation:

Against a swarm take earth, throw it with your right hand
under your right foot, and quoth:

Take I under my foot, found I it,
How Earth avails against every kind of wight
And against hatred  and envy and
against the mickle  man’s tongue.

And whither cast over the grit, when they swarm, and quoth:

Sit ye victory-wives,  sink to earth
Never be ye so wild, to woods flee.
Be ye so minded , toward my good.
as beeth every man, of food and home.

First thoughts back in 2016
I had explored various ways of working with the text and settled on the dual aspects of the instruction, followed by spoken charm. The speaking aspect is important so I decided to use speaking heads.

The initial version was designed as a book with 6 spreads and the early prints were trials and experiments in cutting text and reduction lino. The Anglo Saxon is a lovely text to work with. In the end I ran out of time to finish the whole thing, but seeing this again I might continue with the set of prints at least.

Rough drawing… the text was a challenge! 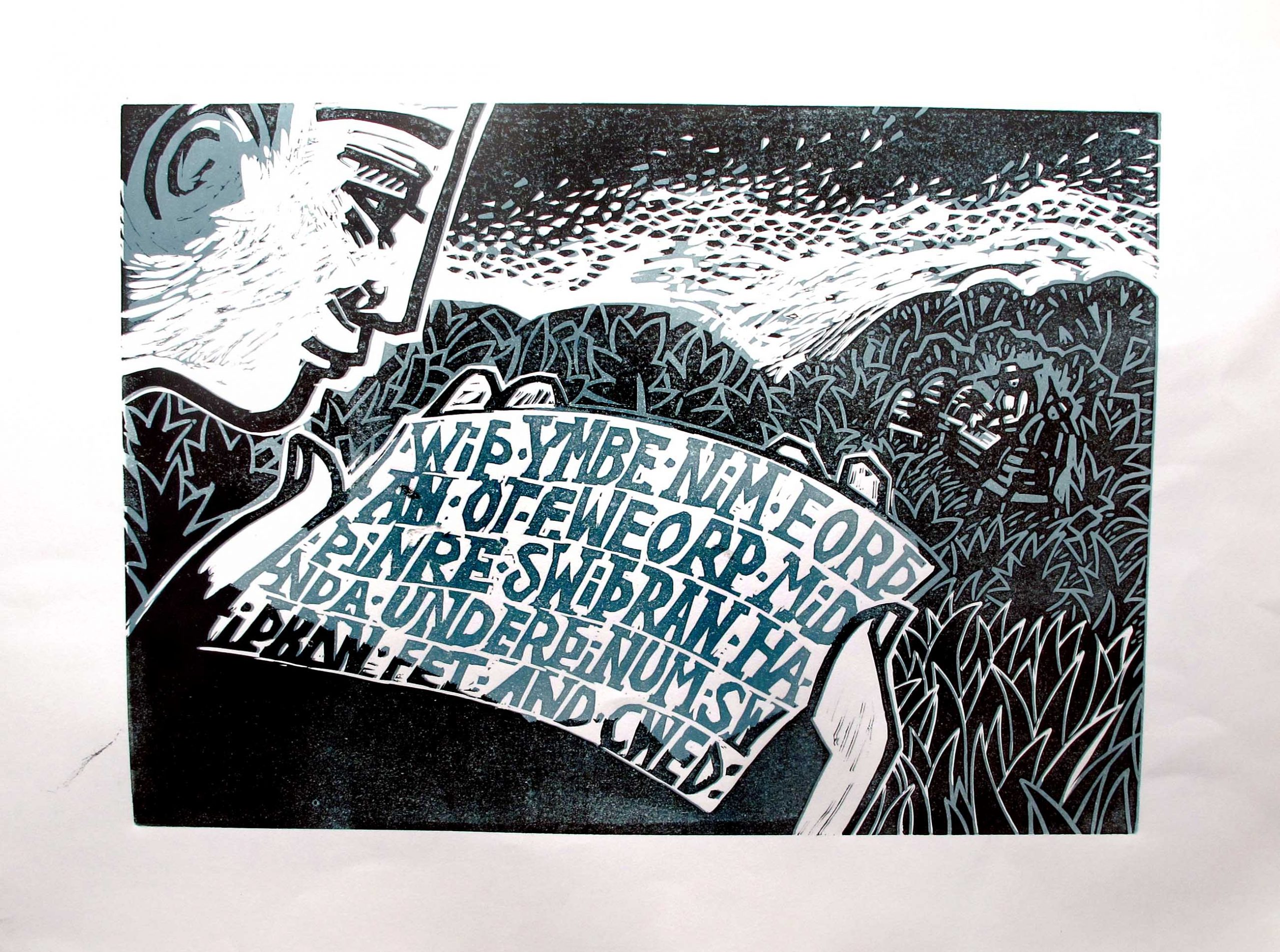 Proof of the first part of the charm,  2 colour reduction print

Proof of the second part of the charm. 3 Colour reduction print. The bee keepers are in the background of the images. This was my particular favourite.

Another possibility for a booklet which I went back to for the current project.

They all had possibilities and I may look again at the book form.

When I came to reconsider it this year I decided to keep the speaking heads but to use wood as a perhaps more sympathetic medium and a more robust personality for the head. I looked at ancient stone heads for my inspiration particularly the 3 faced Corleck Head. You can read more about it at : http://bailieborough.com/corleck-head/ 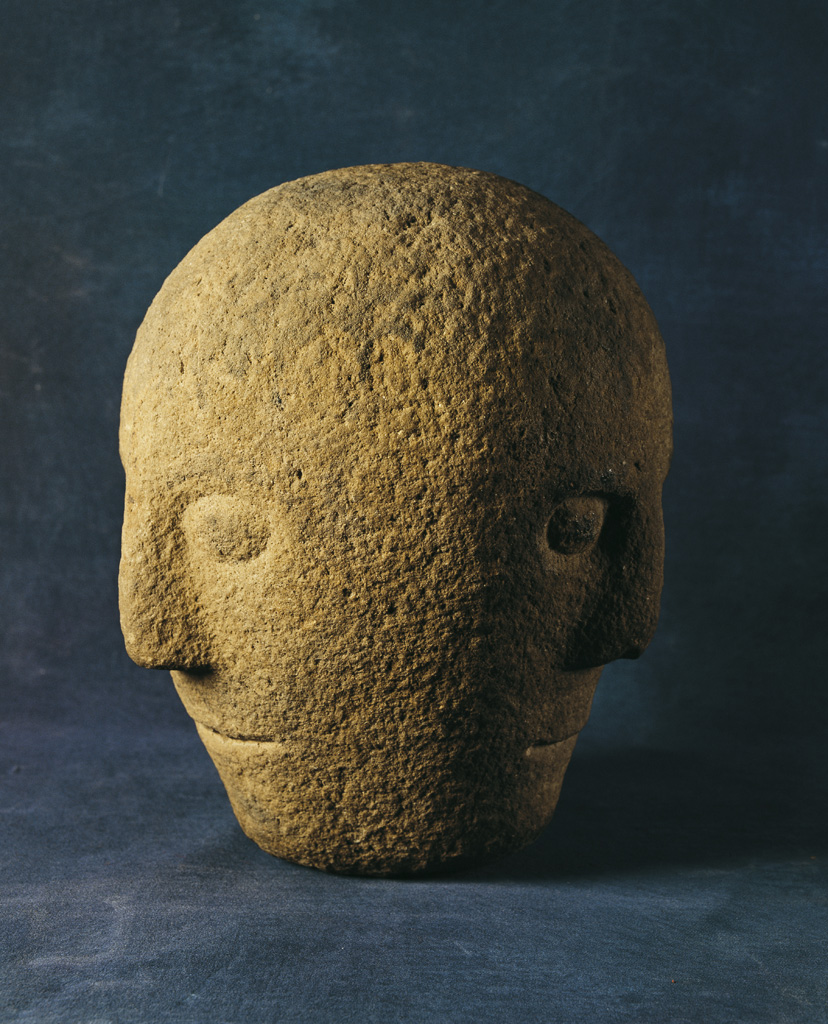 I designed a sort of folder to hold one print and the text still using the  talking heads for the cover and inserts,
And started cutting the blocks. 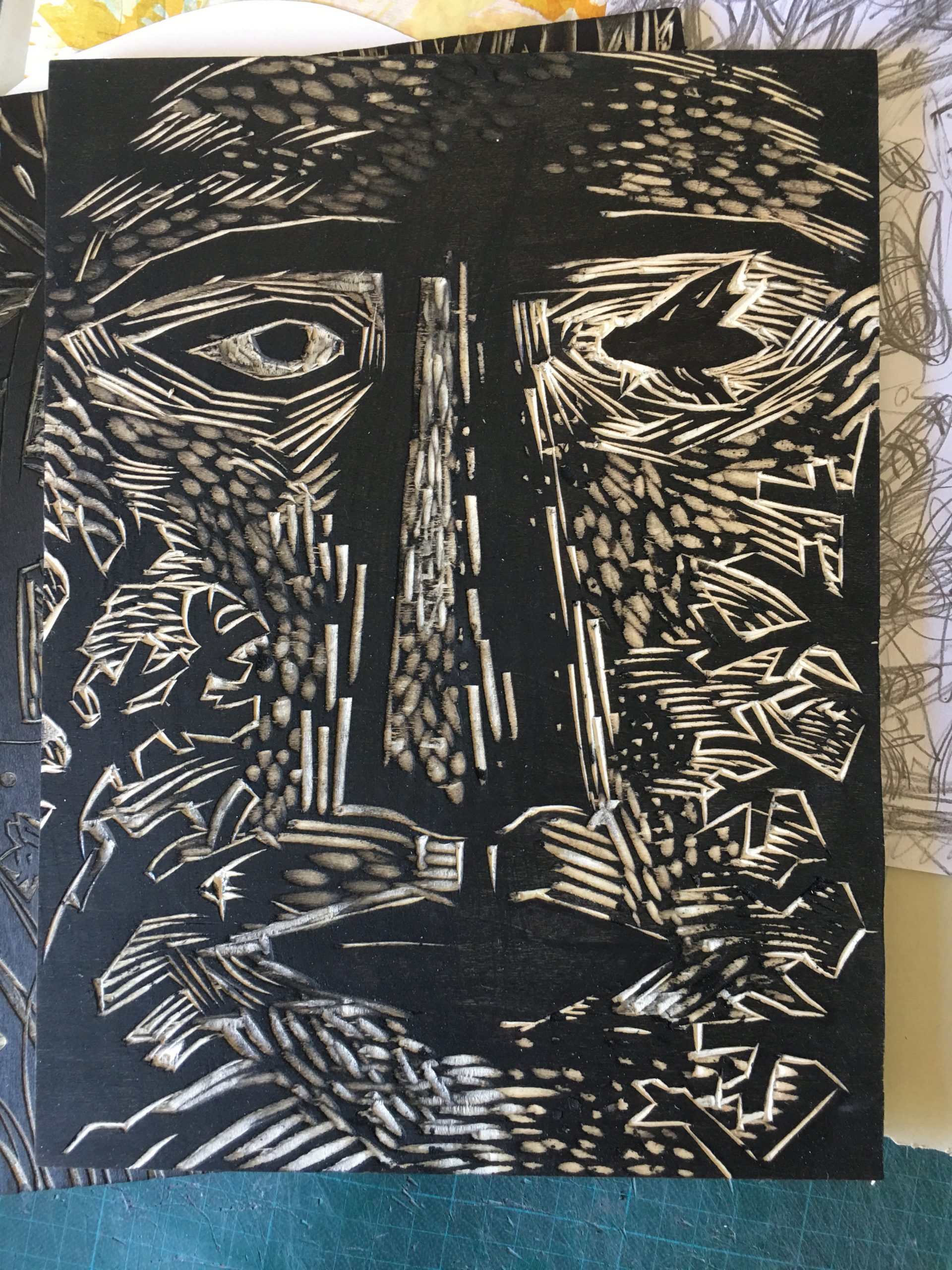 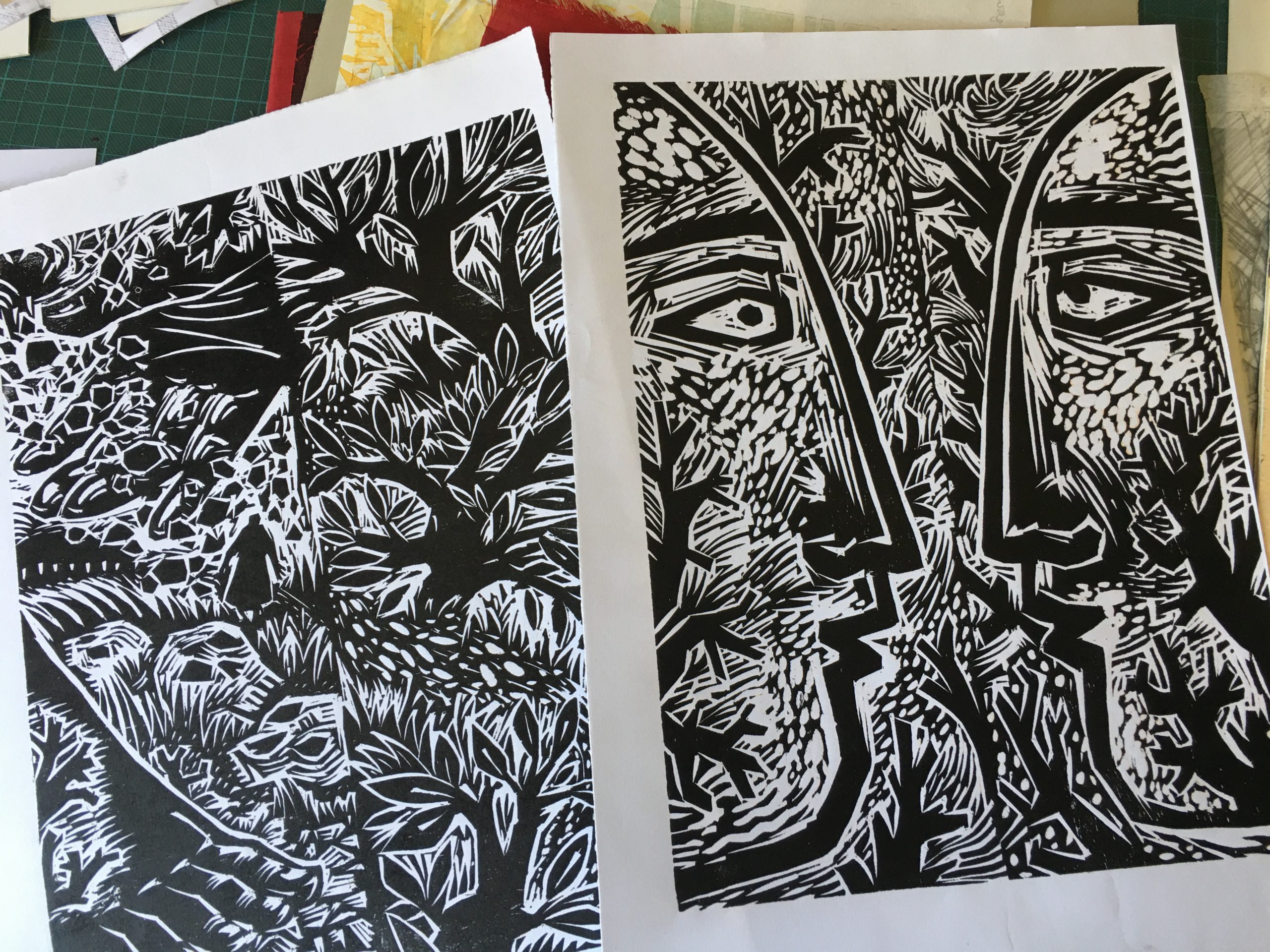