The Colour of Birds Book: The Backgrounds

Just continuing my series on the Bird book, while waiting for creativity to return!  I am sure it will.
The book was completed last year and in all, I think, took 3 months. Based loosely on the wonderful Ferdinand Bauer’s colouring system.

I had roughly planned a set of 10 prints, just slightly bigger than A3 which would form the main pages for each bird.  They would be folded, glued at the spine and foredge to form a double page spread. Each back ground would highlight a chosen colour from each bird. For example with the robin it just had to be the splendid red breast with hints of the blue grey feathers.

Robin as seen with his background in the bound book. The birds are printed on fine feathery Japanese paper so that the backgrounds can be glimpsed through the black and white images and tipped in at the spine.

This was a very experimental process for me and because of the slightly random nature of the printing I decided to use card plates, mainly for economy. To chop up so much wood or lino only to find things didn’t quite work would have been just tooooo expensive!

The card plates are OK, but they do have to be treated carefully. and sometimes the inks were patchy on the slick surface. All a bit hit and miss. The paper was Somerset Satin 250gsm. Lovely paper, again not cheap so I did have to use some care.

A pile of a the card plates… lots and lots.

Sometimes I used the same shapes on various prints which gave a rather nice continuity to the project.

A set of trial prints .. (yes my drying rack is a washing line in the conservatory. )

A set of thumbnail snaps of some of the ten prints. I think I must have made 3 or 4  of each. I needed a rough set to make up the prototype book. It seems so much work to make just one book…. Hmmm but in retrospect I think it was worth it. I have a set of back grounds which will be framed with their birds for my exhibition next year. 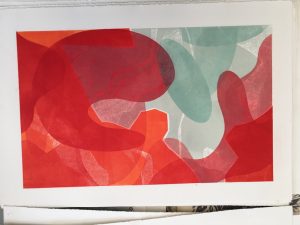 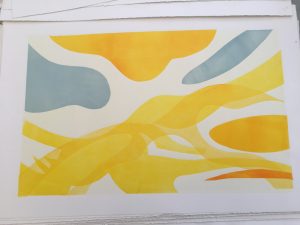 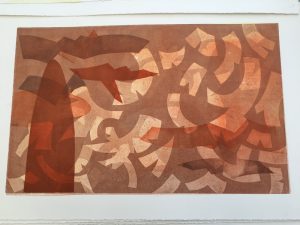 Rook and a set of prints.

Next thrilling installment:  Final printings and assembly of the book….