A Few, Rather Reluctant, Sketches

I have to say that I don’t much enjoy “holiday sketching”. I look at other peoples wonderful inspirational sketchbooks of cities, great landmarks, people and sweeping countryside etc etc. But I just don’t get that inspired I would generally rather be doing other things.
But it’s “INKTOBER” when people get busy with ink drawings every day and I wanted to continue doing “something” every day so am joining in. I am also beginning to look at type and letterforms in general because this next term is about combining words and images.

Here are my first weeks sketches.I had two sketchbooks one A6, one A5, a black and brown pen and a couple of grey felt tips. I started in UK in a London pub.. beer mats are good for sketching type..

We were on our way to Amsterdam. I was doing some initial project research at the fascinating botanical garden De Hortus as well as walking the canals, eating and drinking too well, visiting print shops, thinking and mulling over plots and plans for the coming academic year.. all in fabulous autumn sunshine. Lucky or what!

De Hortus
It is a small garden and very busy and I wasn’t there to draw but to understand more about the history of the Garden. But a couple of things struck me as interesting images. The red framed endangered plants and the weathervane. It has an interesting story and embodies some key things about Amsterdam, water, ships and trade. Trade particularly contributed to the importance of the Hortus from its earliest days. I added the moon and a few flying fish. As I was drawing, a magpie settled on the cross bar at the top and another flew by. A good omen.

There are some red list plants in the Hortus which have a red frame around them. This little captive one is Dracaena draco the Dragon tree. The effect of the framing is interesting.

One small tree, the ancient Wollemi Pine is so rare it has its own cage…to protect it from us.It’s a rather wistful little plant in its cage, with its red frame.. Captive but safe? It’s a dilemma.

Wandering About
If the weather is good Amsterdam is the perfect wandering city,

Brown Biro on A5 sketchbook

Spires.. you often see the same one over and over again from different streets.They would make fine cakes I thought.

A sketch looking across Amstel the river, to Amstel the road. The houseboats are endlessly fascinating.
One of the hazards of sketching outside is the lurching drunk who wants to come and sit beside you and be your friend.  “Why me?” I ask myself, I don’t even look friendly! I might have got a bit more done but moved along.

Type
Unfortunately, because of this break I am missing the first week of a short two week type project ( a 32 page bound book.. eeek.. that will only leave me 5 days from start to finish) so thought I should really draw some type to at least try to get type into my head. It’s not usually there and may need some hammering in.

A few sketches in the A5 book.

Some numbering (I think neon) on one of the very beautiful buildings in the southern district. (The paper of this book is very thin and the ink from the previous page shows through. I rather liked these shadow images and it has given me a few more ideas.) 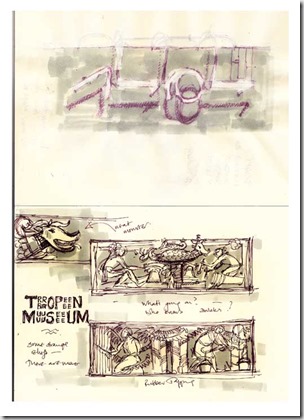 There are some rather nice reliefs on the Tropen Museum. It’s a wonderful Anthropological Museum.

Type round a pillar.

Back to the little sketchbook: Apotheek de Castro… Interesting because it has these old signs.. and a modern one, (see the EK of it below).

…and a boat called Haddock.

The electricity signs on the boxes.. and the type on the bottom of one of the house plaques. There is an unidentifiable animal whose very short front legs are compensated for with wings.
…Dream on Val … More soon….