I love a New Year, even if a really awful cold has delayed my start a bit.  There is so much to do so many plans…

A quick catch up with the Moon project which has now ended.
Many fascinating ideas came along with many frustrations in tow.  I often have to learn things the hard way but it has increased my understanding of monoprinting and its possibilities and I did complete, if not really finish, a few ideas for small books.
I made a prototype embossed concertina book, loosely based on a tactile/Braille solution to depicting the moon’s phases. 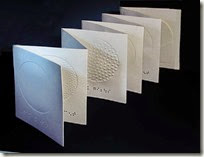 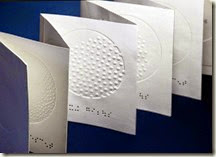 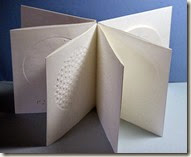 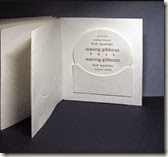 It was very white, and very tricky to make with an awful lot of measuring, hole punching and trials before I got it to work, but I discovered a lovely translucent quality to the compressed paper, how to write the phases of the moon in Braille and that I need more patience.
I made another rough book idea based on the views that Galileo had of the moon through his small telescope. He could only see sections of the moon one at a time which, they say, is why his early moon maps were inaccurate.
The round telescope views reveal a section of the larger moon map piece by piece. ( in this case Cassini’s very beautiful moon map of 1679). 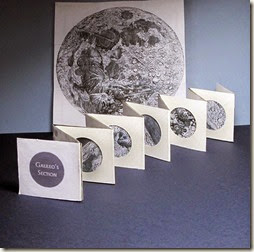 Pagination worked out for printing.

I made a very simple, soft back, slip cover and printed some moon words on the endpapers 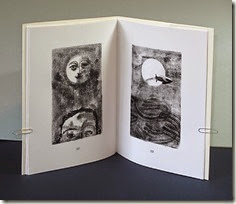 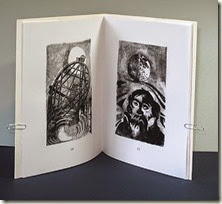 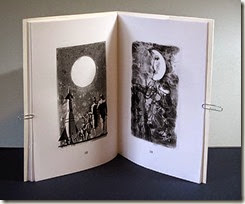 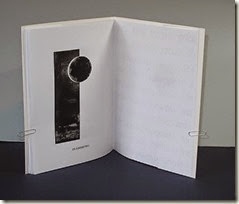 his small book illustrates just some of my research avenues.
It was all completely fascinating, absorbing and wonderful.

I find myself reluctant to leave the moon, so many more possibilities and half finished and unexplored ideas, but there may be time over the next year to realise a few more.
Meanwhile it’s on with the game.. Growth, Eels and Rivers plus more pigs and bees to come.