At 11.00 am on 30th of December with the turning of the last page of “Bring up the Bodïes” Thomas Cromwell finally released me.

I felt myself fortunate to have got away with all my body parts intact save the aching Foot. Not many who came across him were quite so lucky.
After his darkly compelling world I was glad too that the sun was shining, the birds were singing and that I could see the first striped leaves of a crocus struggling through.  But as I come up for air I also, selfishly, hope that Hilary Mantel is deeply closeted with the Tudors writing his next chapter. It can’t come soon enough. I have also been released from my crutches.

Shuffling replaces tapping. So now my progress, if slow, is at least silent. The Foot is gradually easing back into being a functioning thing. The painful toe stabbing demons are still visiting as the long incision begins to heal and tightened tendons and muscles are stretched. But it IS progress.

Today I made a small drawing, not an interior as a kind reader suggested but three tiny eggs.
My Christmas card” last year (see First Snow) showed some snow covered nest boxes. They came with the house and in the spring we cleaned them out and put them up in hope of some takers. Blue tits came and were busy for a while but for one reason or another they left.
We have magpies, we have visiting cats, there are cars and circling birds of prey. So many things that could disrupt an early nest.  And then there is just life, death and misfortune. Earlier in December we took the box down and inside were 3 tiny eggs. It was poignant.

I like to think they found another quieter place and raised another brood.  The nest was a bundle of grass, moss and some vibrant day-glow fibres which makes me think a neighbour has a closet 1970’s dressing habit.
The little eggs have been on the kitchen windowsill nestling beside a head of garlic on a pretty saucer and waiting to be sketched. I wonder at their tiny size. 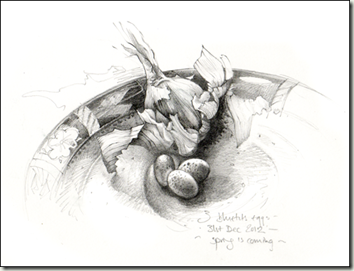 Three little eggs .. a symbol, if you like, or an encouragement to the coming of new life and a new year.

I have always thought that making a drawing of something gives it another “go” at life, another possibility of existing in a different dimension.  We will put the boxes up again and keep our fingers crossed. And so it’s forward, if slowly, into spring and into summer; to painting, drawing, printing and hopefully, walking.

May your muses be many, attentive and cheerful.
A Very Happy New Year to you all.