New Bees in the Block and a Leafcutter.

New Bees
A few days ago I was delighted to see new bees exploring my bee house. Some are using the same sized holes as the mason bees and even some of the spare cardboard tubes and some have gone for slightly smaller holes that I drilled in a couple of logs. I watched them coming and going but not with any obvious leaf sections so I am wondering if this is another Osmia bee rather than a Megachile leafcutter. To my inexpert eye they look very similar! 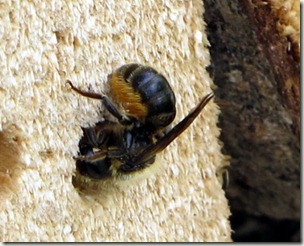 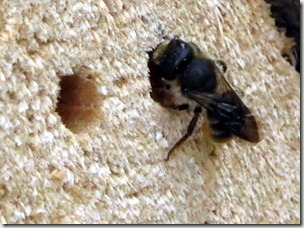 The two photos show the same bee busy sealing up one of the drilled holes. She stands on the outside and works her way round the entrance sealing up the nest with chewed plant material.
She works from the rim inwards. It’s a slow process involving many trips backwards and forwards. Watching the bees returning to the bee house I am interested that sometimes they seem unable to locate the right nest.
One sniff seems to tell them if it is right or wrong, but rather than land and try another entrance they take off and seem to need to reorient themselves and zoom in again. Sometimes it has taken 6 attempts.

They enter head first with, I am assuming, pollen for the bee bread, then they back out do a neat turn and reverse in to, again I presume, lay an egg. They are active early, as soon as the first rays of sun hit the bee house, this morning it was 8am. But they move slowly, noticeably speeding up as they and the day gets warmer… but then so do I. 🙂

Yesterday I was over by the lambs ear plant, looking to see if the woolcarders were about and happened to see a bee land on a nearby bindweed leaf. I have rather let things go here and “weeds” abound, the thinking is that something is better than nothing but now I find that this dreadful invasive plant has a use, because the bee rapidly cut a neat semicircle from the edge of the leaf and flew off.

They are fast…superfast. I ran to get my camera but the bee returned to her cutting twice before I could get a shot. I watched for about half an hour and she must have made 6 visits. She seemed quite choosy about which leaf, seeming to need a good starting point on the edge or to get into the perfect cutting position.

As she cuts, she rolls the leaf in half and  flies with the folded section held under her body. Once she cut a piece so large she needed to land and rest on another leaf before taking off again.  Despite being fairly near my bee house this bee was nesting somewhere else, she sailed over the hedge, up and away, 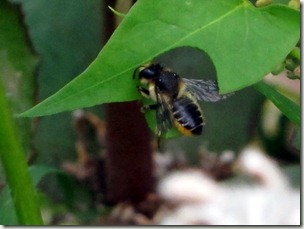 Here is my only reasonable photo of the bee in action. 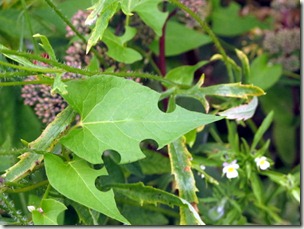 There are many, much better photos of leafcutter bees in action on the internet and some short films…but it is nice to have my own record! I have not been entirely clear as to which leaves the leafcutters use. I know they like rose leaves, other books say “various” leaves.

But which ones and why? I wonder if they choose leaves which have chemical, possibly anti fungal properties. I wonder how they evolved this behaviour and I wonder at their industry and ingenuity. The wonderful French naturalist Jean-Henri Fabre who I have talked about before also pondered this. From “Bramble Bees and Others”

“the Osmiae make their partitions with mud or with a paste of chewed leaves; the Mason-bees build with cement; … the Megachiles made disks cut from leaves into urns; the Anthidia felt cotton into purses; the Resin-bees cement together little bits of gravel with gum; … Why all these different trades?”
Why indeed?

Close by the bindweed I have seen similar bees on the knapweed. You can see their funny and characteristic pollen collecting behaviour as they wriggle around the flower with uptilted abdomen transferring pollen to the stiff gingery hairs of the scopa. Again I am unsure of the species. 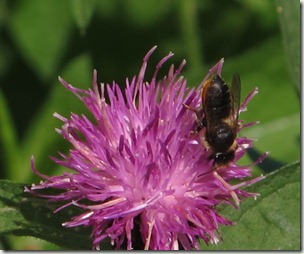 There is so much to learn and understand about bees and I am aware I am such a novice, but not knowing the exact species does not in any way detract from the sheer enjoyment of seeing them, hearing them and knowing you have provided a few of the right flowers.

Like the birds, bees come and go as they please. It’s the wildness of them all that I love so much.