In between other work I have also been working on two more bee commissions. It has been a chance to paint again the beautiful Tawny Mining bee Andrena fulva and the Common Carder bee Bombus pascuorum.

I often work on several pieces at once and have learnt, the hard way, that it’s good to put things aside for a while.
Unsatisfactory things can be forgotten but glaring inadequacies may be illuminated. So it’s a double edged sword. I put them away, completely out of sight, hidden away in a folder and always get them out again with some trepidation.

Years ago I used to work late into the night, worrying away at some problem detail. I would go to bed in a happy self deluded state, only to realise next morning how completely dreadful it all was.
Now I don’t do that. I put the work away for a while and try to forget about it and then reassess with a fresh eye.

So it’s been about a week since I saw these two paintings and mercifully they seemed just fine.
But of course there is always another half a day of faffing about, primping and adjusting, after which you will be MUCH more satisfied and the casual observer (aka long suffering partner) will see no difference at all..

and so it goes on..
But inevitably, at some uncertain point,  even when racked with indecision and doubt, you have to say….”That’s it!..Finished!”

Actually  I do really like these two.. 🙂 So here is my “Foxy Lady of the Bee World” again. I saw her in the spring, taking a break on the clematis which is twining around the trellis on the shed. She was basking in the sun, a little spot of fiery foxy two tone red…just gorgeous! first rough… 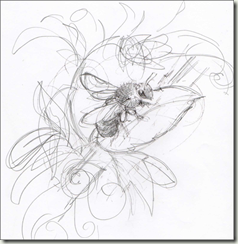 and the (maybe….almost) finished  painting.. 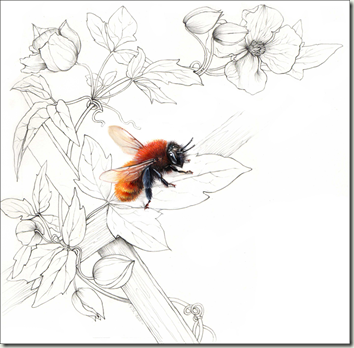 but I still have a day to go before delivery….