Of Snailshell Bees and Where the Wild Bees Live.

On Wednesday, to my great delight I saw the astonishing snail shell bee in action.
Earlier this year Trevor had very kindly emailed to tell me of a probable Osmia bicolour nesting location quite close by and so, on the only hopeful bee spotting day last week, we spent a fascinating couple of hours on a chilly but dry morning scanning a local south facing scrubby bank.

We were looking for the female Osmia bicolour bee who so charmingly finds  ready made homes in empty snail shells.
She is quite small and extremely pretty with brilliantly coloured dark ginger hairs on her abdomen and a black head and thorax and not that easy to see in amongst the scrub and leaves.

The first one we saw was just resting in a fleeting patch of sun and if she had been the only one I saw I would have been happy but like any good TV reality show the walk just got better. 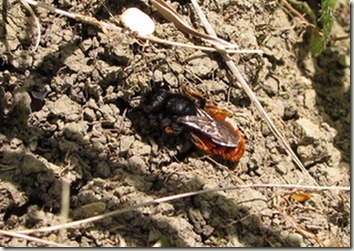 None of my photos do justice to this lovely bee and her endeavours.. They are very quick and I had great trouble trying to focus but it is a record.

We then saw Bee number two, first examining an empty snail shell and then moving it around .. presumably to get the opening in the right position and sheltered from rain.

We could not quite see how she moved it but from what I have read and blogged about before, (see my more extensive  “Bee-on-a-Broomstick” post  from 2010) they pull rather than push, holding onto the ground with their jaws and dragging the shell.

How ever they do it, it’s some feat…its a very large shell for a very small bee!

Along the way we also saw many dainty little grizzled skipper butterflies for which the site is being managed and protected. Trevor explained that this was the perfect time to see them and we must have seen about a dozen making the most of a briefly sunny morning.

Their status is “HIGH” on the Butterfly Conservation priority list and they are becoming increasingly rare. 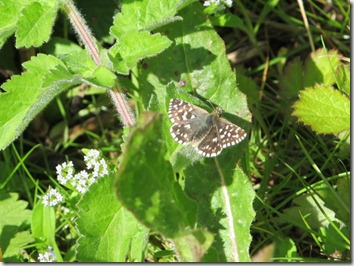 We saw a couple more Osmias as we walked along and hundreds of snail shells.. why there I wonder?
And then just as we reached the end of the bank one bee flew down into the grass to an almost completely invisible shell tucked in amongst some tufty leaves and I watched in complete fascination as she flew backwards and forwards with more pieces of dried grass and twigs to cover up her home.

It was transfixing! She was so very quick and so very busy, bringing now a short piece, then a longer piece and on one occasion a grass stem so long that its trailing end caught on all the surrounding tall grasses and had to be abandoned,  but not until she had made several frustrated approaches and landing attempts.

The piece of grass must have been at least 8 times longer than the bee and her efforts were valiant, but you could see they were doomed. “No no”we said “get a smaller piece”.. its hard not to get involved! 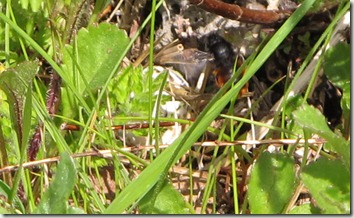 You can just see the bee, the pale snail shell is just to her left. The long, abandoned, pale twig runs almost the full length of the foreground. 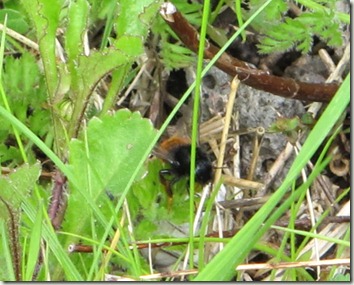 Here she is just over the shell having dropped off another stick.

We had to leave her to her building.

She will have laid her eggs, maybe 5, in this shell nest, carefully partitioning off each cell with chewed grass and sealing up the end with more chewed grass and tiny pieces of stone. If all goes well the eggs will develop and the new bees will stay in their exquisitely designed home until the following spring.
I should add that we were very careful where we put our feet that day! I think I will be joining the Jain monks soon and shudder to think how many tiny things perish under a careless footfall.
We saw other wonderful things.. the tiny pretty field pansy, a huge female cuckoo bumblebee Bombus sylvestris, a brilliant Small Copper butterfly… 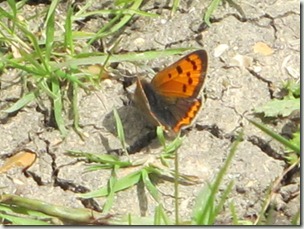 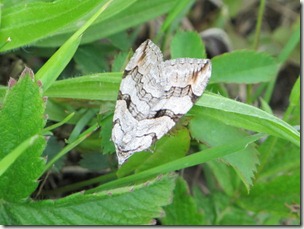 an elegant green sawfly, beeflies and many more unidentifiable small mining bees,  but the snail shell bee was treat of the day for me.

Where do the Wild Bees live?

At the shows I am often asked “where do bees live” and there is no one easy answer, their nest choices are many and varied and I am learning more and more about their ingenuity and resourcefulness all the time.

Here in the Empty Garden I do, now, at last, have some Mason bees taking up residence in my bee house. 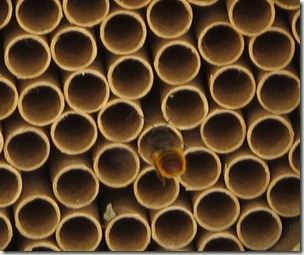 A little black Hairy Footed Flower Bee has spent days excavating the roots of the struggling strawberry plants in the strawberry pot.
She has left spoil heaps of soil on the paving stones and is constantly whizzing back and forth on a sunny day.
Her high pitched zizzzz is quite distinctive. 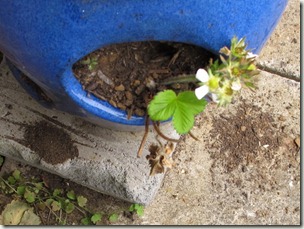 There are big mining bees constantly trying to dig holes in the lawn and my friend Matthew gave me the remains of a Bombus pascuorum nest which had been found in a compost heap.

Many people have told me of Bumble Bee nests in birdboxes, often now the Tree Bumble Bee Bombus hypnorum and I have had several accounts of Leafcutter bees nesting in flower pots.
Bombus lapidarius might be under your shed or in amongst tree roots.. and silly mining bees love to nest on well trodden paths with some predicable results.
On Friday I walked up behind the reservoir and found two sunny rape field margins where the pale dried surface of the earth was spotted with dark mounds of newly excavated damp soil. It looked like a little outbreak of measles. 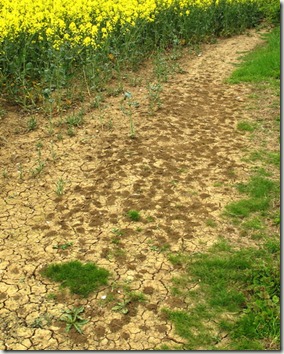 Tiny mining bees were constantly coming and going, accompanied by what I think was a sand wasp who ran in and out of everything, both the bee nests and the newly formed cracks. 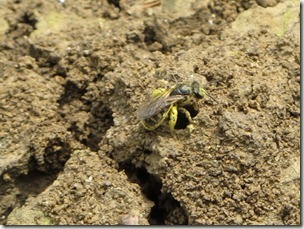 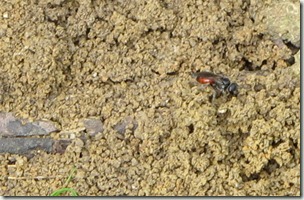 Sand wasp (??) emerging. The mining bees are very funny and tend to sit just inside the nest.. in this field of pimples you know you are being watched by many tiny eyes. 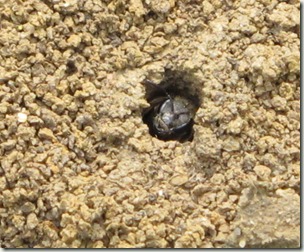 A big Andrena bee was also investigating the holes but was far too large to get in. I was not really sure what it was doing.. whether it was lost perhaps or looking for a start.. why not use an existing burrow and save work, but these would have been a very tight fit.
I do know that different species nest alongside each other but this seemed to be the only one of its kind here.
I wonder what the outcome was? 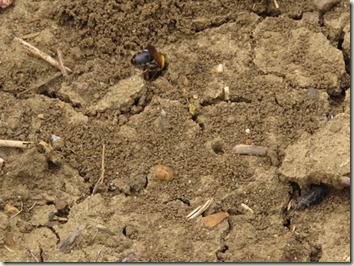 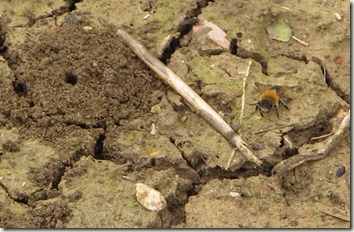 and taking a break, looking rather disconsolate after trying many holes.

The more I watch and learn, the more questions I have.. and biggest question of all is how can I possibly have enough time in one short life to answer even a few of them??  :)….
eg: Just why are there so many damp loving snails on a sunny dry bank in Cambridgeshire and why are the starlings stealing chunks of my newly planted lavender and chamomile. I read that they use it to fumigate their nests.. clever things!