On Friday afternoon it was hot and still. I walked to the woodland edge behind the reservoir where, in the dappled shade, the wild things were resting. The mining bee colony was quiet. The birds were still.
A huge bumble bee was snoozing on a log and a beautiful noon fly had folded its golden wings to take a break in the sun.
However not everything was sleeping because dancing all around the emerging leaves of the scrubby oaks and sycamores was a shimmering cloud of tiny moths.

“Enchanting” is the only word to describe these exquisite little things.
Of all the tiny pretty creatures in the natural world these might just be the ones to persuade you that fairies could exist.

When you look closely you see their wings are have a metallic sheen, their tiny bodies are gorgeously adorned with long black spiky hair and their antennae impossibly long and white. They dance and settle, then dance again.
Caught by the light and set against the dark woodland interior, their glimmering wings change from gold to pink to blue to green to bronze. Fabulous.
But, reluctantly leaving the realms of the fanciful, this cloud of silvery flying things are the males of little Green Longhorn moths or Adela reaumurella, one of our day flying moths, swarming,  as they like to do on a nice day.

If you want some hard facts and dissected moth photos go to the excellent  British Lepidoptera species page.
If you prefer to live in magic land stay here for a while.

At some point I would like to try a painting, but how to capture that delicacy? I made a couple of sketches which seem inadequate but I do think a loose watercolour would be the way to go, to keep their lightness and insubstantial nature.  More sketches to come. 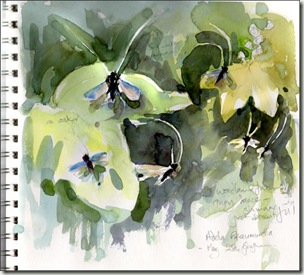 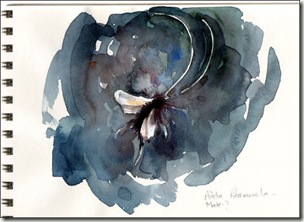 The dancing Adela reamurealls.. (which sounds a bit like a circus troupe!)
Watercolours in my sketchbook.

I  also took a snap of the handsome noon fly,  it was, just after, noon.. 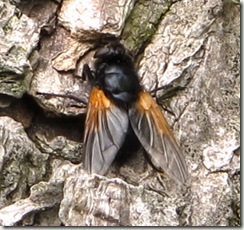