It’s back to work now and I have started the new “Big Six Bumble Bees” commission and have moved on from scribbled notes to thumbnail roughs. This is where I sort out what I am doing and why, and where I check that they will work, not only as individual paintings, but as a set. I think they will be hung in a line rather than in a block and I know they will all be framed the same. So my initial considerations are these:

The paintings are for a bee enthusiast who has a very beautiful old house in Lincolnshire, the flowers need to reflect the garden and of course be compatible with the bee. ie tongue length etc. 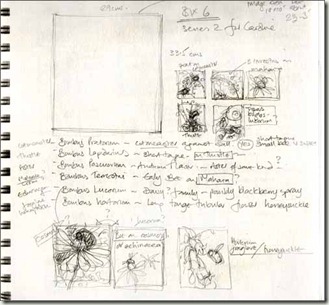 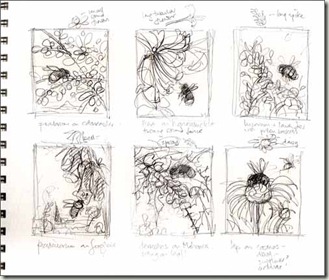 Things may well change but for now the Bee/Plant combinations are these:

Bombus pratorum:. The Early Bumble Bee with Cotoneaster. This is a small bee with a short tongue. I saw many of them at Grafham last year on Cotoneaster in the churchyard… and it’s a little compact flower with an arching design to the branch.

Bombus terrestris: The Buff tailed Bumble Bee with Mahonia. Mahonia is, year after year one of the very best winter plants for early bumblebees. I have just planted one here and saw terrestris queens on Dad’s Mahonia last year.

Bombus hortorum: The Garden Bumble Bee with Honeysuckle. The long tongued bumble bee who can access the nectar from the long tubular flowers of honeysuckles. It’s again such a favourite country garden flower.

Bombus lapidarius: The Red Tailed Bumble Bee on cosmos/daisy type flower. I love to see bees running around the top of flowers.. it may change into a thistle, but I wanted one central flower head for the set.

Bombus pascuorum: The Common Carder Bee with a foxglove. I saw so many of both at Heligan. A different shaped flower as well.

Bombus lucorum: The White tailed Bumble Bee on lavender. I had to include lavender, not only is it a true favourite with all bees but it is also a later flower. 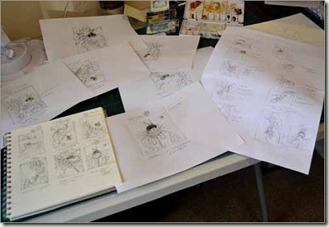 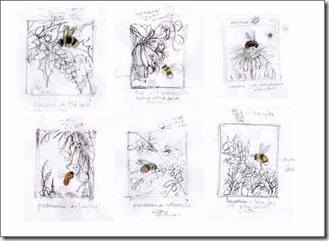 So I flipped the terrestris /mahonia, which looks fine, and then the lapidarius, which doesn’t alter the design at all. That’s better. It’s just a small thing but keeps the variety of pose, direction, and design that I want. 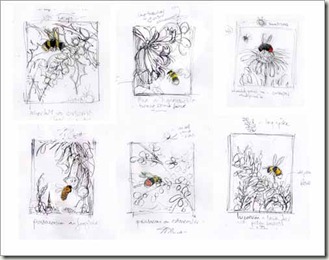