At the weekend we went up to Dad’s house to bring back a few more bits and pieces and the last of the house plants. Recently on Gardeners Question Time,  Pippa Greenwood was saying how difficult she finds it to throw away surplus seedlings.
I am having  the same problem with Dad’s pot plants.

I had already transported the tender begonia, the money plant I resurrected from the greenhouse a couple of years ago and a nice little cactus, back to the Ugly Bungalow where it is at least a bit warmer.
Three more questionable plants were left to survive until we had more room in the car. This time they looked forlorn and abandoned, so back they came. The croton I fear is on its last legs, and the ancient poinsettia, I think given to Dad 2 years ago, is straggly and woody and has lost most of its lower leaves, but the one plant which is more or less the same is the Aspidistra.

It is really mine. Given to me by my Auntie Bessie and at a rough count it has been with me for over 30 years. I left it with Dad eight years ago. “You will look after Auntie Bessie, wont you Dad?” He waved his hand. “It can go in the porch.”
In its life it has survived incredible neglect, latterly because Dad really had forgotten it even existed.
It has been cut back to nothing, had its leaves ignominiously snipped and trimmed of those unsightly brown ends and those same poor leaves have been repeatedly trapped in the door because it was really too big for the porch.
It’s been subjected to drowning and drought by turn, endured blistering heat and freezing cold. It lost most of its leaves last year, so on a visit home and in a final kill or cure attempt, I repotted it and sure enough on my next visit some months later a few new leaves were struggling to unfurl, imprisoned by rock hard dry soil. “For Christ’s sake will someone please water this plant!!

And so it has survived, suffering in silence in the porch. .. I think its problem is that none of us really like it.  But none of us can bear to kill it… because in effect it is Auntie Bessie… and we all loved her very much.

So here it is, uncertainly left in the hall for now, where it is, again, too big. It seems to hover like the rather unwelcome guest who hasn’t taken the hint to leave. We bump into it and brush past its leaves.  An appropriately ugly plant for the Ugly Bungalow. Do two ugly’s cancel each other out?
No.
But despite its brown tipped leathery leaves and its lopsided growth, its incredible tenacity has earned it a duty of care and a grudging affection. It is, from floor to top of the highest leaf, 3ft high. 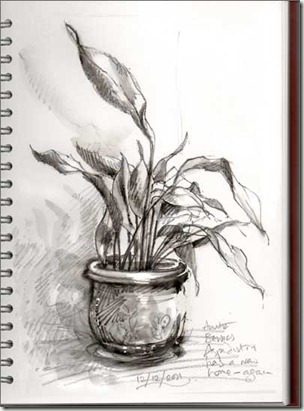 I intend to lavish as much love and affection on this plant as I am doing on the shed. ( Good Shed News: … the shed has a new roof! Ahhh joy ) but I am wondering if it will survive affection, having gone so long without.

Some people call these passed-down plants, “Heirloom plants”… how nice. It conjures up a cosseted, pampered much-loved thing, carefully propagated and handed down.
The Aspidistra just came to stay and never left… but I promise you Auntie Bessie, I will now look after it… sadly, that dreadful hat you knitted for me when I was ten just had to go. 🙂