Day three is starting the pencil background.  I sketch it out a little bit more on tracing paper, to get a feel for what I am doing and how it will look.
I don’t normally use trace-down unless something has to be very accurate, it’s slow going enough, without drawing things over and over again. 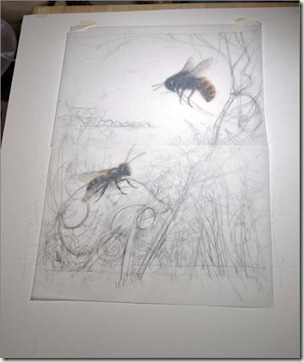 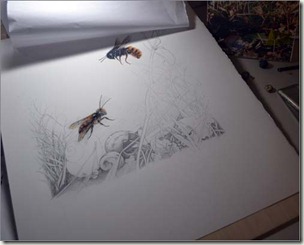 My first encounter with snail shell bees was when I read Animal Architecture by Karl Von Frisch. He describes the laborious covering  of the nest with twigs. Here is Turid Holldobler’s Illustration of the bee carrying a twig to her nest. 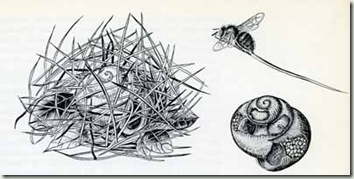 But then here is Walter Linsenmaier’s illustration from “Insects of the World”.

In my previous blog post A Bee on a Broomstick I seemed to think that the Linsenmaier’s drawing was first.

On the left, on the cutaway diagram of the shell showing the cell cavaties, he has included the male and an opportunist predatory jewel wasp. 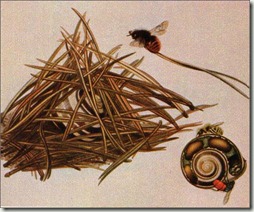 He draws the shell covered with pine needles and I particularly liked the idea of including them, because, the additional details for the background will include “The Needles” the famous rocks on the Isle of Wight and there are pine trees on the island too.
(It’s just these little connections that make things more interesting for me.. even if no one else ever knows.)

“Some species drag the shell into a hiding place before or after constructing a nest in it. Taking firm hold of the ground with repeated bites they grasp the shell with their legs and haul it after them. Some apply plant paste to parts of the slippery shell enabling their feet to get a firm grip. A few species bury the shell in sandy soil others protect it with a cover of interwoven pine needles or straws fetched individually in flight and some disguise it with moss and other things. It is ever a new experience to observe how objectively and with what careful testing such bees work and how penetratingly thorough is their interest in their productions.”

So I decided to give the female a pine needle to carry and, in the middle distance, I added a little shell with its pine needle camouflage.
I based the foliage and twigs on a photo I took in the summer and I have some shells and some pine needles to work from, again collected locally. 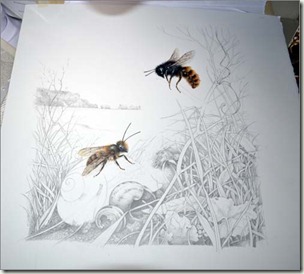 Pine needle and the Needles 🙂 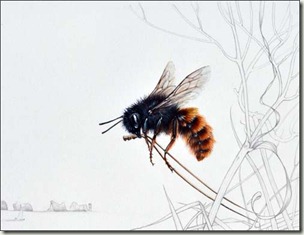 This was a hard working 9-10 hour day. There were many decisions, much hesitation and lots of pencil sharpening.