By Val Littlewood November 30, 2011 December 29, 2019 Uncategorized
We have just moved into the new house. House sounds too grand because in reality it is a small bungalow and a pretty ugly one at that. But we did need a home. This is our 10th move in 8 years, 8 years of rentals in 3 different countries.. so we really did need home, even if it’s just for a year or two. We were sad to leave the tiny humming cottage which was full of mason bees but who knows what I will find here.

I had driven past this “for sale” bungalow many times thinking how ugly it was, but eventually, in desperation to find something in our price range I came to see it. It’s the best I can do and I will try to learn to love it, but “silk purse/sow’s ear” keeps creeping into my mind. I remember someone writing to me in my early blogging days thinking I lived in a picturesque cottage in the country with a glorious garden and having to tell them we lived in a city in a tiny, hot, 2nd floor concrete box of an apartment with paper thin walls and nightmare neighbours. I often wondered if they were disappointed, if that somehow I was less of a real artist because my location did not quite fit the romantic ideal.
I found a book once in a shop. It was called “Artists Studios”. Photographs of impossibly dreamy rooms in impossibly dreamy settings. I picked it up and looked through it, wondering where I had gone wrong? I returned to the hot box and drew the beautiful leaf of an exotic plant whose origins lay in distant lands and whose story of discovery was incredible and the hot box became a irrelevant. The one thing that stuffy apartment had going for it was that it was within cycling distance of my much loved Leu Gardens and the Ugly Bungalow is 5 minutes walk from the shimmering water of the reservoir, so despite its dreary looks I count myself extremely lucky. I will breathe some life and soul into its plain walls, fill its empty garden with bee flowers and line its rooms with books. And surely, if my observations of life have taught me anything, it is that external appearances should not matter….. (but a pretty cottage would still be quite nice.. maybe next time :)….) So here we are. The internet is up, we have a bed and two kitchen chairs. It’s a start. And the poor Ugly Bungalow does have a garden and I am ridiculously excited about its possibilities. It too is a blank canvas, mostly grass, with heavy clay soil and a few shrubs. I know there is a little apple tree and, joy of joys, a dilapidated shed! Today I took my father’s heavy spade and dug my first flower bed.. a mere 2ft x4.. I had forgotten how hard it is to dig! ..but slowly slowly I will get there.. there are plans for a pond, and some veg… and many other things. and a few drawings in between … 🙂 A Start…… a tiny 4” square sketch, my spade and boots and the fledgling flower bed.. 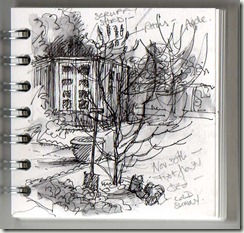