Homeless, some bees (and me)

We have, over the last few weeks, been trying to find somewhere to live, so I found myself feeling somewhat sympathetic towards this rather handsome bee I found in the garden the other day. 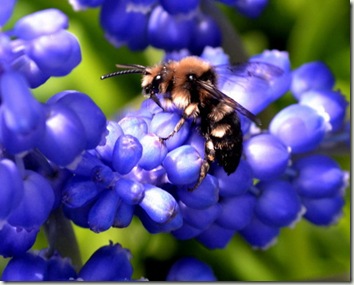 It’s Melecta albifrons one of the cuckoo bees. Here from the informative Essex Field Club site is a concise explanation.

“It is a cleptoparasite or cuckoo bee of Anthophora – this means that the bee (female) goes into an Anthophora burrow and lays its egg with the pollen food supply gathered by Anthophora. When the Melecta egg hatches the larva feeds up on the food supply intended for the Anthophora larva, pupates and emerges next year instead of the host.”

I have known about the cuckoo bees but this has been my first encounter with a live one and I, like others, was struck by its rather relaxed behaviour. It was just drifting about the flowerbeds, quite unlike the darting, purposeful flight of its host.
It stopped to feed on the muscari and was not unduly bothered by my close proximity which enabled me to photograph it with my rather basic camera.

To read and understand more about this curious bee go to Blackbird’s unfailingly  excellent “A Bug Blog” and read her post “Melecta, a cleptoparasitic bee” and get a better look at the bee itself.

I have recently got hold of a copy of Edward Step’s 1932 “Bees Wasps Ants & Allied Insects”.
In the fascinating chapter “Homeless Bees”, he mentions 2 Melecta species but takes issue with the name………

“…we have to take exception to the scientific name. Melecta signifies a gatherer of honey, but as this bee has no cells in which to store it, she can be at most, a mere sipper of nectar for her own refreshment!”

Its perhaps easy to feel rather disapproving of these lazy bees but I guess they still perform crucial pollination tasks so are not all bad and are very beautiful.

Another tiny cuckoo bee I recently came across is, I think, Nomada goodeniana which until a year ago I would have confidently thought was a wasp. A small cloud of them were inspecting an old stone wall on a brilliantly sunny Friday afternoon at Easton Walled Garden,  where I was doing a bee recce. They are very delicate and very flighty, constantly popping in and out of successive holes but not settling for long. 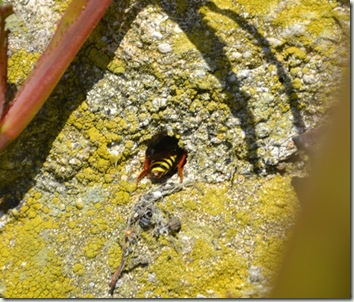 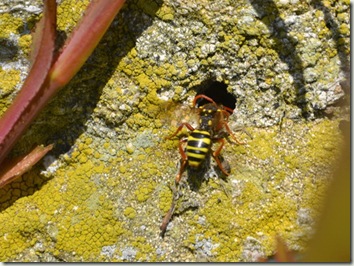 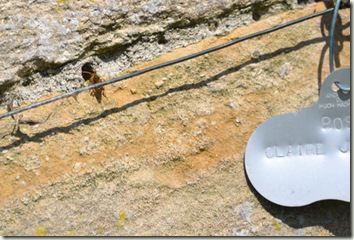 They are really tiny. Sometimes without something to judge the size by it’s difficult to get an idea of how small some bees are. Here below one is inspecting a hole near a rose bush tag.

What has also interested me is that, the day before, I had seen this wall busy with these tiny bees (below) which I had thought might be mason bees. The day after they had gone and had been replaced by the Nomadas..now I am not sure what they were? .. or what was going on. 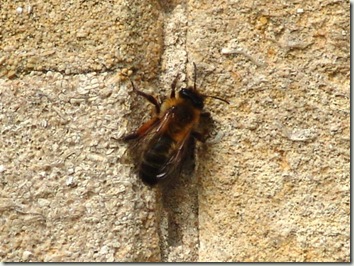 Info tells me the Nomadas are parasitic on Andrena species.  Perhaps they are Andrena nitida .. but would they nest in a wall?? I am asking for help on BWARS. Describing these nomads of the bee world Edward Step admits,

“it is, perhaps, not strictly correct to class them as Homeless Bees because during the earlier stages of existence they have admirable homes in cells that were never intended for their use: but the most considerable genus was named “Nomada” by Fabricius, indicating pastoral, unsettled habits and it seems well to adopt the spirit of his name for all those without homes intended for them”

Hmmmm….  all  this is sounding uncomfortably a bit close to home. My father’s house is a wonderful and welcome stopping off point but Nomada valeria here is so looking forward to having an “admirable home” of her own quite soon!