Goodbye New Orleans, Second Lines and almost back to Bees!

I am sitting in an hotel at Orlando Airport with my suitcase and my laptop. I’m in that strange calm limbo land of transit. It’s a little hiatus, a chance to catch my breath before flying back to the UK.

Behind us we leave a million memories, unforgettable images, sounds, tastes, and experiences, all crammed into 3 short months in wonderful New Orleans. In front of us?  Who knows!

And exactly what were we doing in New Orleans for the last 3 months and why the lack of blogging? Well, we were lending a hand with running a B&B, which couldn’t have been further removed from the gentle delights of bees and botanicals.
But sometimes an opportunity to do something completely different presents itself and you have to take a chance, throw caution, reason and common sense firmly out of the nearest window and grab it tightly!
The job was hectic to say the least, non stop from dawn till dusk and beyond, absolutely no time to blog or even turn on the computer some days, but occasionally we did get out to see something of this fabulous city.
And for my taste, the more local the action the better. We ate, drank and shopped local, meeting people who live and work in this great city and became for a short time, a part of the community,  far away from the dubious delights of Bourbon St. ( but of course we did go there as well!).

A Second Line Parade is a neighborhood event during which a local Social (Aide) & Pleasure Club parades through nearby streets.

“By state and city ordinances and law, very seldom do these parades take up routes on heavily traffic laden thoroughfares in the city. Most are held in the back areas, visiting the stops that help the clubs to continue the tradition.  A Main Line is the “main section or the members of the actual club, that has the permit to parade. Those fans, admirers and curious are the “second line” or part two of this planned street parade. These parades have come to be called and known by this fact.”

And we were all of those things, at first curious, then admiring and ultimately huge fans of these joyful rolling street parties that sometimes rock on for 4 hours or more and cover miles and miles. 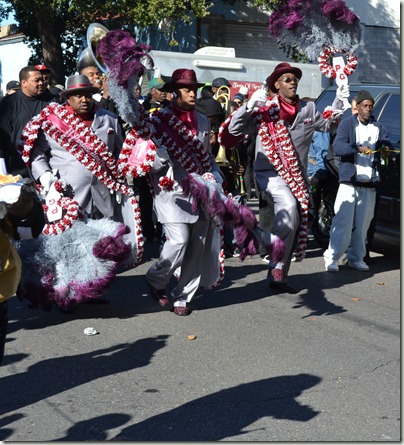 “The Perfect Gentlemen” accompanied by  “To Be Continued” Band.

This is probably as close as many of us will ever come to feeling like royalty because, as the parade marches on, the thoroughfares open up before them. Side streets are closed, police cars bar a giant overpass and traffic is halted.

The Parade and its people are king, momentarily possessing the street, for just as long as it takes to pass by. Normal life is briefly on hold but quickly closes in behind this temporary wave of foot traffic, where stragglers may be nudged along by impatient police mounted on bikes and horses. 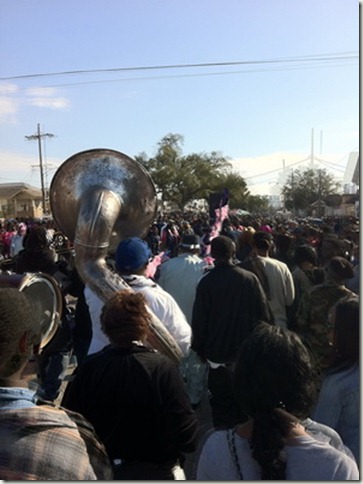 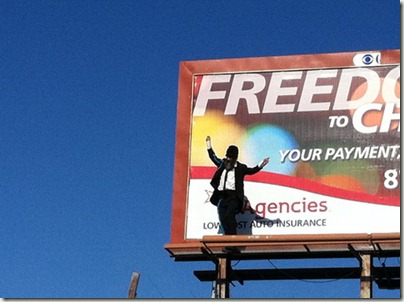 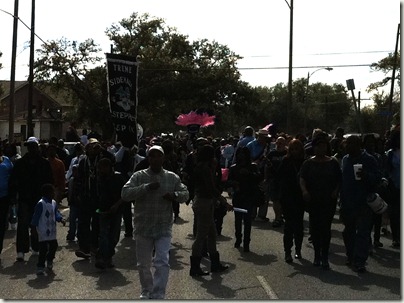 But  the route ahead is lined with people, they come out of their houses to shout and cheer and wave. They dance on their balconies. Children are hoisted up onto shoulders and whirled around and around.

Riders on prancing ponies appear from the side streets and fall in step. And in the “second line”, following on, strictly behind the yellow tape, everyone, just everyone, dances, even if it’s just a few steps here and there. The kids are just great. 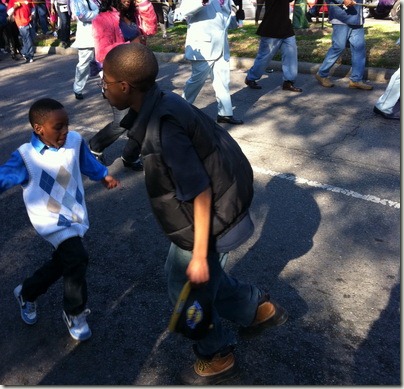 And how could you not dance? The music is infectious and uplifting and the brilliantly dressed and most elegant ladies and gentlemen of the Main Line shake, rattle and roll their hearts out. You are impelled to follow. 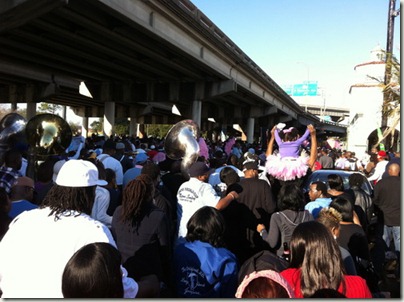 So on three brilliantly sunny Sunday afternoons we joined the Second Lines, “cool cool” beer in one hand and superlative Who Dat beefburger from Uncle P’s Party Wagon in the other. 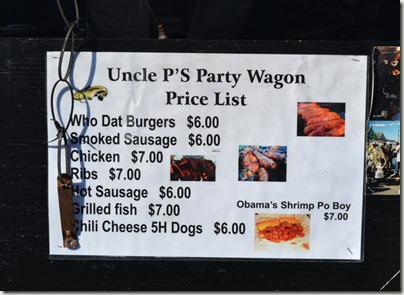 We followed and followed, stepped out and sang our way through the suburban neighborhoods of New Orleans. Out along Washington, Louisiana, Daneel and Martin Luther King on to Broad St, over Canal, to St Peters.

We danced all the way through Treme and along Basin St.  We saw many things which we would otherwise not have seen, new houses, old houses, haunting derelict reminders of Katrina and optimistic rebirths in new development.

We stopped to talk and draw breath and drink and eat before starting off again. Our last fabulous and jubilant Second Line was on Super Bowl Sunday when a break in the cold weather gave us warm sunshine and a big happy crowd as we followed along with the Treme Sidewalk Steppers. A little snippet from the Times Picayune the following day… 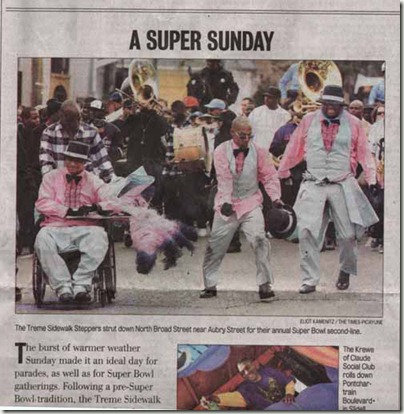 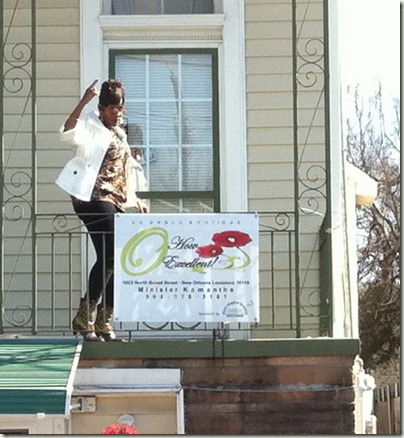 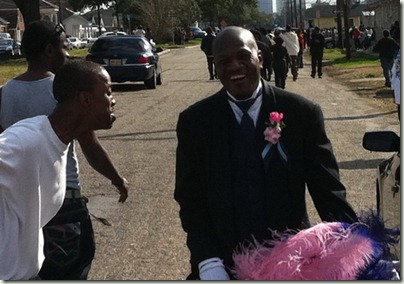 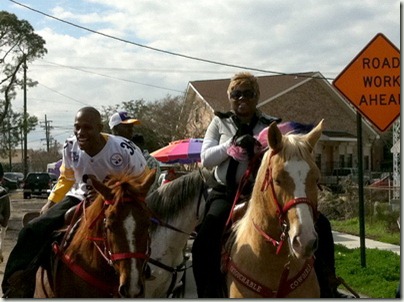 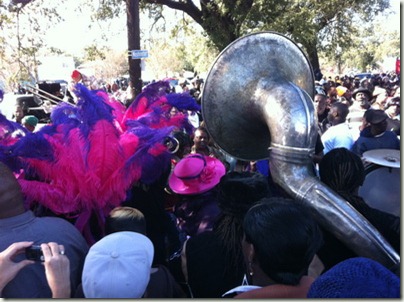 Had to include this cool cool shop! 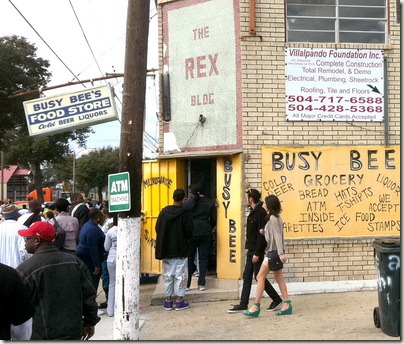 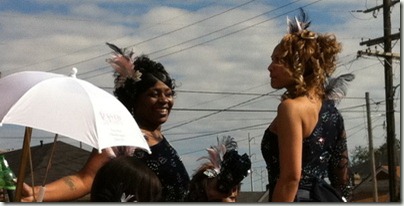 photos by Chris from his iPhone

We will, sadly, miss the great tourist event of Mardi Gras, which is a shame, but perhaps these smaller, participatory Second Line parades gave us a more intimate taste of the culture and traditions of New Orleans.

Static photos cannot really convey the atmosphere, especially the noise and the rhythmic drum beats, so for an added experience go to Youtube and just look for the Treme Sidewalk Steppers 20011.. there are some fun Videos!

We are on some of them! A BIG thanks go to our good friend Christopher Hammersla for making it all happen for us! 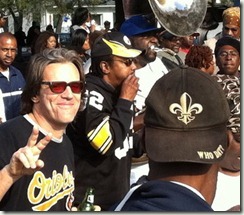 If you ever get the opportunity to Second Line, take it. Put on your dancing shoes and follow.

Follow, follow and dance and sing. Your feet will be sore, your head may be reeling, but your sprits will be soaring….