Bee watching is one of lifes gentle and absorbing pastimes and something which should be prescribed as a perfect stress reliever. This past summer I spent many hours watching different bees coming and going on the lavender.

So, for this commission I wanted to portray this little honey bee just as I had seen them, busy in amongst the lavender stalks and enthusiastically throwing their front legs up in the air as they are about to land.
As well as my own observations I had the help of Elivin’s bee, Dads lavender, and some scientific research about how bees land. The research really just confirms what common sense and observation tells you and if you watch bees fairly closely you can see for yourself how they land and how they use their feet and antennae.

But the study “The Moment before Touchdown: Landing Manoeuvres of the Honeybee Apis mellifera”  by Mandyam Srinivasan is interesting, (you can read the whole study here) The Journal of Experimental Biology here reported on the study:

…….Srinivasan began wondering what happens in the final moments of a touchdown.
Flies landing on a ceiling simply grab hold with their front legs and somersault up as they zip along, but Srinivasan knew that a bee’s approach is more sedate. …..Initially, the bees approached from almost any direction and at any speed; however, as they got closer to the test platforms, they slowed dramatically, almost hovering, until they were 16 mm from the platform, when they ground to a complete halt, hovering for anything ranging from 50 ms to over 140 ms.
When the surface was horizontal or inclined slightly, the bees’ hind legs were almost within touching distance of the surface, so it was simply a matter of the bee gently lowering itself and grabbing hold with its rear feet.

However, when the insects were landing on surfaces ranging from vertical to inverted `ceilings’, their antennae were closest to the surface during the hover phase.
When the antennae grazed the surface, this triggered the bees to reach up with the front legs, grasp hold of the surface and then slowly heave their middle and hind legs up too. ` 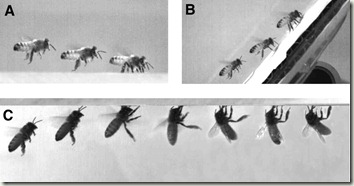 In conclusion: “During the actual touchdown, bees simply use the appendage closest to the landing surface to make first contact – that is, the hind legs in the case of horizontal surfaces, and the front legs or antennae in the case of vertical or inverted surfaces.”

It doesn’t really surprise me that bees are sensible and adopt the easiest possible landing strategies without any of the showy back flips of flies. But the  use of their antennae is fascinating. Really useful things, antennae!

Honey bee and Lavender Coming into land on a sprig of lavender is my little worker honey bee, pollen baskets part full and front legs raised in anticipation of touchdown. 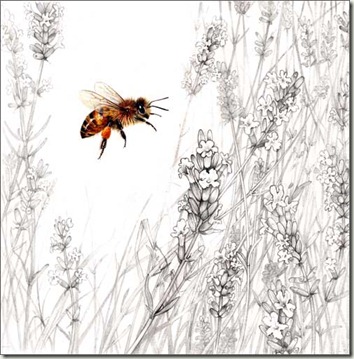 It has been a lovely commission to work on especially as I have been working on it in between entertaining my father. As a beekeeper many years ago he was interested in this painting and it’s slow development has been a jumping off point for general honey bee discussions, anecdotes and fond memories of times long past.

The beehives are still behind the garage. Next spring I intend to brave the Sleeping Beauty barrier of brambles and explore a little. Dad and I have been wondering what little bee or bug may have taken advantage of this ready made if crumbling shelter. I think there will be a big gang of slaters.. but who knows, there may even be a bee or two?