“Black Things from the Beach”: No 3: with added Indian.

As I open it, the carrier bag containing my “Black Things From The Beach” smells of the sea.

It’s pure nostalgia because I have lived away from the sea now for 4 years.
In the bag are black bits of wood, a dark pebble or two, a piece of seacoal, some dusky egg cases, more bits of black seaweed and, very un-black, a bright green, plastic  American Indian chief, complete with magnificent headdress.

He is poised on one knee, taking aim with a rifle. Taking a shot, no doubt, at a pesky cowboy or two… if only there were any. But this Indian was quite alone. Without friend or foe.  I found him tangled up in some seaweed.
An ignominious end for a brave warrior.
A tideline in September with a drizzling sea fret is not a place for the melancholic.
It is full of loss.  Lost, rejected, discarded things .. “washed up” broken down, worn out and weathered.

I am not immune to its cheerless aspect but, should I feel inclined to trudge on and on in a south easterly direction to meet a watery end, I would inevitably be stopped in my tracks by some curious thing with a wonderful story that I had yet to discover.

And of course the tide line, with its fascinating, if forlorn, array of mysterious things, is different every day. I can understand the addictive nature of beachcombing.

So Black Thing today is, I think, a spotted dogfish egg case, irresistible with its twining tendrils and its long slender shape.
The egg cases are normally empty but if you should find one with a little dogfish embryo or two, go to kind Jim Hall’s page here at Glaucus.org where he will tell you about his successes and failures in raising abandoned dogfish.

Its a tricky business. I found a bunch of the egg cases all tangled up together, a mermaid’s charm bracelet of pods,  but drew just one,  lying like some beautiful sleeping thing and I had to add the ever vigilant Indian with his gun.

They are on the windowsill again.  Behind the Indian is the net curtain. I thought this elegant thing deserved an artsy title.. Henry Moore would surely approve. 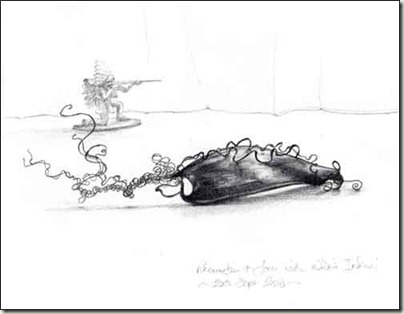 I am wondering who lost the green Indian and thinking that “green” is a curious choice for a human of any kind.