Life on the Ledge, Update

It was still there. The sparrows nest survived a whole week.

There had been a couple of heavy downpours and a vicious lightning storm which set off all the fire alarms in the apartment block, but the prevailing winds had shifted, their side of the building was more sheltered.

I had hoped that gave them a fighting chance. As I said on the last post, they had started taking in fluffy stuff, mossy bits and pieces and the odd feather or two, not their own, but other bird’s feathers which in some ways seemed quite strange. On Friday a large black feather had been added to the top of the nest, like some sort of defiant flag or trophy. I sketched these on Saturday. 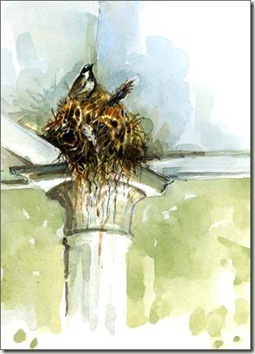 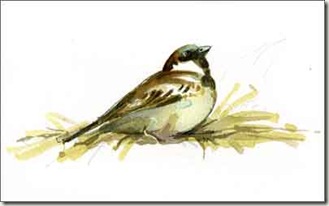 But yes.. you guessed.. by Sunday morning their home was gone, again. It lay at the foot of the column in a little tangled heap.

The site of the nest is way too high for us to assist them at all, which is such a shame. That afternoon it poured with rain and the two sparrows returned to huddle on their empty ledge again..
I am really hoping that this time they will move on and find a safer location! They are still hopping around near the door outside and chirping in the bushes and trees and, I am sure, are undaunted by such a small setback.