Watching Bees in the Garden.. UK

During the last three weeks at home in Lincolnshire I spent some time in the garden and out and about in the village, bee spotting. This does involve staring into other peoples gardens which can be misunderstood, but also leads to some very funny and interesting conversations.

I am still struck by how very few people know about the bees, but then are completely enchanted to find they have, say a little leafcutter chewing the rose leaves or the beautiful B lapidarius busy in the lavender.

It’s not that  they are disinterested, it’s just that, like me, they had not really noticed them before.

But, once you know, it is as if a different level of existence has suddenly been made visible.

One of criss crossing flight paths, complex flower relationships and preferences, courtship, nest building and the struggle to survive all going on under our noses amongst these most endearing of creatures.

Once pointed out, most people are completely captivated.

I should explain that the garden is a quiet changeless place,  untouched now by my elderly father and only occasionally subdued by the equally elderly gardener, my sister and me when I go home.
Wildlife is happy here, rabbits and squirrels hop and skip around the lawns and hedges unafraid.  Pesticide free for many many years it is a very natural garden and although flowers have been reduced to what is easy and low maintenance, there are certainly enough to attract some lovely bees. 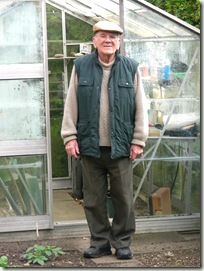 I also found this photo the other day. This is my Dad who made this lovely garden over some 44 years.
Taken a couple of years ago when just a sprightly 90 year old, now at 93 he can’t get out so much, but still watches the action through the French windows.
Like us here in Florida the squirrels are a source of endless amusement. (He does not approve of this photo as he thinks it portrays him as scruffy and simple.. both of which are very far from the truth, but I like it because it is simply a lovely garden photo!)

The Bees
In the old stone wall in the garden amongst the ivy there was a Bombus pratorum nest and these delightful little bees were everywhere. On the blue geranium cranesbill, the chives, the blackberries, green alkanet and latterly the lavender which was just in bloom when I left.

I found a drowsy overnighter on the chives one morning and this male resting in a blackberry flower being warmed by the first rays of sun. His drooping antennae indicate he is probably sleeping.
He has positioned himself to be supported by the petal at the back while anchoring himself onto the stamens and the petals to either side. He was oblivious to me and the camera and only moved after about 5 minutes of full sunshine. 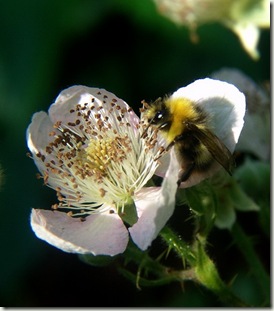 This little Megachile male ( centuncularis?) spent most of its time upended headfirst in the pink geraniums, scrabbling about to get reach the nectar. 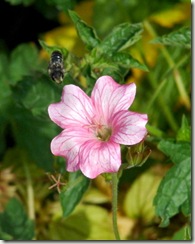 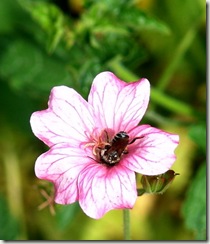 He stopped on a leaf just long enough for me to get a photo.. but they are very quick 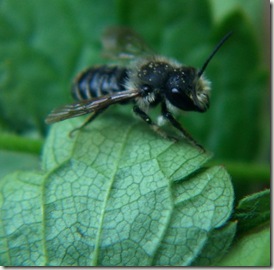 And I was so pleased to see the very handsome Megachile willughbiella again.

This one was all over the lavender and I did manage to get a few photos. This bee is next on my list to draw, he is just gorgeous! Unfortunately you cannot see the feathery front legs very well on this photo, which identify this pretty bee so well, he also has a loud buzz! What a complete delight it was to watch him… 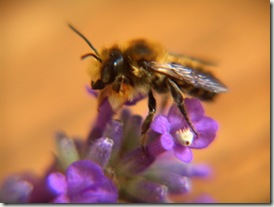 During the 6 weeks of my UK stay flowers came and went in the garden. The honeysuckle had a brief 2 weeks of glory. I watched the Garden Bumblebees Bombus hortorum, long tongues already unfurled, alight on the long stamens and push their elegant heads down into the flower tube.
They sometimes stand on the stamens with their back feet and grasp the petals at either side for stability, it’s an action rather similar to us humans opening a cupboard to look inside. 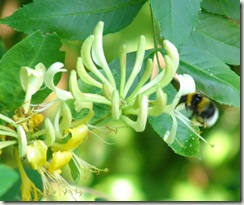 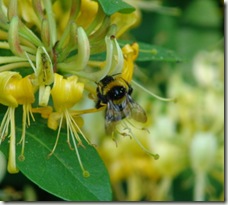 I spent a happy hour with Ursula at her wonderful Easton Walled Garden where we watched a bit of nectar robbing in progress by Bombus terrestris on her honeysuckle.. when we looked at the blooms it was amazing how many of them had holes in the base! …sadly no photos!

Here are two other bees whose identity I am still not sure about.. (I am asking on BWARS..)
This little bee, I first thought was Lassioglossum morio the Brassy mining bee because of the very obvious bronze sheen. He was hot and tired when I rescued him from Dad’s greenhouse.
He posed nicely for me on a piece of lined paper cooling off.
We are still not sure but Alan at (Norwegica’s Aculeate blog ) who has been so much help to me thinks maybe an Osmia sp.. so I am wondering if it is Osmia caerulescens? 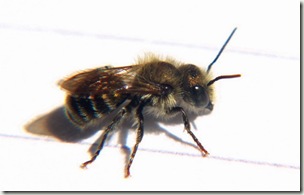 And then this one, on flowering laurel. There were many of them. 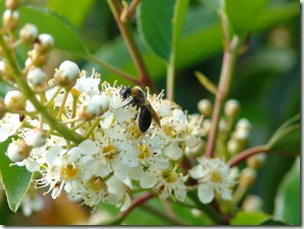 It is quite a big bee with a hairy gingery thorax and a black very shiny hairless abdomen. An Andrena of some sort? Andrena haemorrhoa female perhaps.
Bombus lapidarius love lavender, don’t they! This was about 7.00 early evening, the light on the new lavender is beautiful. 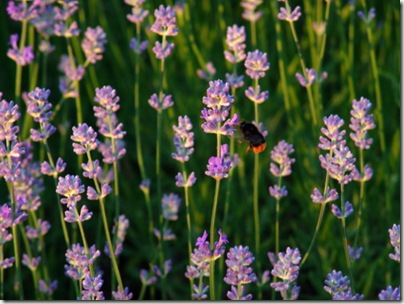 And finally the funny tiny little Hylaeus, white faced bees which once you know they are there, are everywhere!! You just have to spot them. They do look more like black flies!
This one, which I think is an Hylaeus hyalinatus female, was busy upside down on a pink geranium which I had brought inside…rather a surprise for her and just a bit of luck for me! 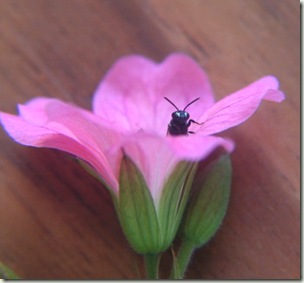 ….. and yes,  I am back in steamy Florida very jetlagged and hot, waiting for my mind, brain and energy to arrive, which all seemed to go missing somewhere over the Atlantic…. I wonder if we will ever be reunited? 🙂