A Broadside for A Beekeeper, “A Swarm of Bees in May”

I know it is a while since I posted but trying to relocate to god-knows-where in just 8 weeks is a bit daunting.
In between packing our few small boxes for the move, selling everything else and coping with incredibly stupid buyers on Ebay, I have not had a great deal of time for very much else.
But of course  that’s just a feeble excuse for not getting on with things. I am in the middle of putting my British Bee Book together… (well, Volume 1 of probably 3) and a couple of nice commissions which I won’t be putting on the blog right now.

But also I am  beginning a series of black and white bee related prints, my “Beekeepers Broadsides”. Long before Deborah’s Bees my plan was to produce some prints which would eventually form a small book or a set of some kind.. all based on a beekeeping theme. Yes honeybees..!!

I know, I am the wild bee champion but I’m also very interested in the honey bees and particularly all the lore and legend  which surrounds them. My mother would go and tell our bees all about the family ups and downs as bee lore demands, and there are many sayings, old wives tales and superstitions surrounding them.
But for Broadside No 1,  I decided on the very well known rhyme…(well known in the UK anyway)

The premise is that May and June swarms are good because the new colony has time to establish itself with many, good, honey making flowers to be had.(it’s all about the value of the honey you understand!) It’s an old saying whose origins are as lost and as clouded as a swarm of bees itself One interesting reference is in Richard Jefferies “Wild Life in Southern County” 1879.

They tell you that’ a swarm in May is worth a load of hay; a swarm in June is worth a silver spoon; but a swarm in July is not worth a fly’—for it is then too late for the young colony to store up a treasure of golden honey before the flowers begin to fade at the approach of autumn.

His lovely books which describe the natural history of his Wiltshire home were written in the late 1800’s, and the previous lines of this passage tell of how a farmer would  leave his work in the fields to come and deal with a swarm of bees.

“he hurries home himself; for although in these days bee-keeping is no longer what it used to be, yet the old fashioned folk take a deep interest in the bees still.”

How interesting that in back in 1879 Jefferies was perceiving a waning interest in bees.

So my Beekeeper’s Broadside No 1 is the rhyme, with scraperboard illustration printed on 8.5 x 11 and, yes, they are available for sale!$14 plus P&P..

They will be on Waving Bee Press and Etsy,  but do drop me a line if you are interested. I thought they would make rather nice gifts for beekeepers? 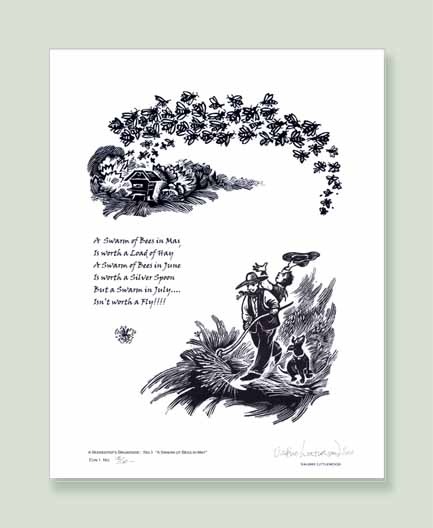 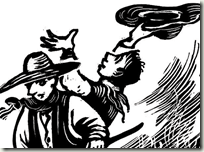 The prints are on nice quality watercolour paper and I am printing a limited edition for the USA of just 100.

They will all be numbered, signed and dated. The limitations are all to do with the imminent move to the UK where the paper and sizes are different so will doing another run there.. yes,  life is a bit complicated!

A “Broadside” in old printing terms is an announcement, poem, some music, or a statement that is printed on one side of a sheet of paper. From the sixteenth to nineteenth centuries they were the cheapest way to disseminate printed information, gossip, scandal and political ideologies.
You will perhaps be familiar with the old “Broadside Ballads” sold by musically inclined travelling salesmen who would sing you the song then sell you the printed lyrics. The nice thing about this project is that all the broadsides in the series can be different… and probably will be… but they will still make a lovely set.

My little Adana press is waiting for me in the UK, as is my beautiful book press, so there will inevitably be some hand pulled prints of one kind or another, I cant wait! It’s also a lovely project to have running alongside my ongoing bee species paintings which are…well…ongoing….