My last Bee, the Dark Honey Bee “…as sweet as tupelo honey, Just like honey from the bee” …

Did you think I had forgotten the Honey bee.

That’s where this whole bee thing started,  on a trip home just a year ago, when I found our old beehives, which made me look up my local beekeeper Joe, who gave me some bees.
I made this painting, Number Two Bee  I put it on the blog, Deborah saw it. I painted 16 bees for her, and then the exhibition came along..  and here I am, a year on about to leave for the UK again this time with my 24 bees.

For my honey bee I decided to paint the old English Dark  Honey Bee the original British bee that colonised northern Europe after the Ice Age. Compared with other honey bees they are thought to be more aggressive  but have thicker coats and are more robust, making it easier for them to withstand  bad weather and cold winters and there are moves afoot to make this beautiful little bee more popular again. 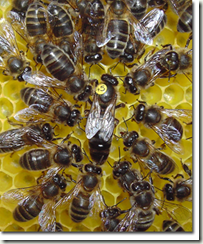 Dark honey bees from  SICAMM an international union of beekeepers, regional and national associations,etc who support the  conservation of this threatened subspecies. see more here In 1917,  Roots famous “ABC and XYZ of Bee Culture” had this to say:

(They) are much more nervous: and when a hive of them is opened they run like a flock of sheep from one corner of the hive to another, boiling over in confusion, hanging in clusters from one corner of the frame as it is held up and finally falling off in bunches to the ground , where they continue a wild scramble in every direction probably crawling up one’s trouser leg, if the opportunity offers”

But on May 18th just last year The Independent said this:

For decades, Britain’s native black bee has been an outcast. The Victorians threw Apis mellifera mellifera out of hives in favour of more industrious foreign species. Modern beekeepers brand it lazy and aggressive.Scientists believe the insect that made honey for the tables of medieval kings could reverse the collapse of bee numbers that has imperilled the annual pollination of crops worth £165m.The Bee Improvement and Bee Breeders’ Association (Bibba) believes the black honeybee, which has a thicker coat, could be hardy enough to survive the 21st century. see here

So perhaps beekeeping in the UK is about to have a little more frisson of risk and trouser legs should be firmly tied at all times. Bibba (Bee Improvement and Bee Breeders’ Association) certainly think it is a worthwhile bee. They are champions of the “Dark bee.” This is from their article “Why The Native Bee Is The Best Bee For The British Climate”

“It is the experience of people who keep the Dark bee in this country that the bee will produce surplus honey every year, even when the summer is so cold and wet that bees of foreign origin have to be fed sugar to keep them alive. ….These characters, together with a population of long living worker bees, provide an optimum number of foragers ready to take full advantage of any short nectar flows during periods of unsettled weather.” read  more  here.

There is also another excellent article all about the origins of bees in general on their site.. “An introduction to understanding honeybees, their origins, evolution and diversity” , it’s a good read and reveals more of the  Dark Bee’s stalwart British character .. “will fly in dull and drizzly weather which would keep Italian bees indoors”..

I had to laugh!   Bibba is looking for help with their Project Discovery “Dark Bee” survey and research. See this page here if you think you can help.

Honey and Bees..a question or two?
Do we ask too much of bees sometimes ..We expect them to pollinate vast areas of produce, and we take their honey which they need for their own survival and well being.
Are we, as always, too greedy? Do we take too much honey? What do we give them  in fair return?
I am not sure and I have asked myself this many times. However my last breakfast in the USA will be fresh fruit with yoghourt and pale pale beautiful real Tupelo honey bought from my local beekeeper, Joe whose little honey bee was my first model.. I have come full circle Joe!

My little black bee Apis mellifera mellifera
perched on the lid of one of my honey jars.. I have many!… 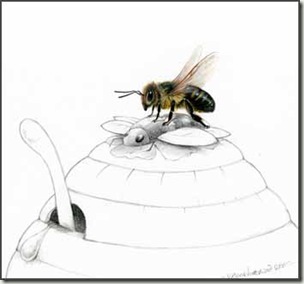